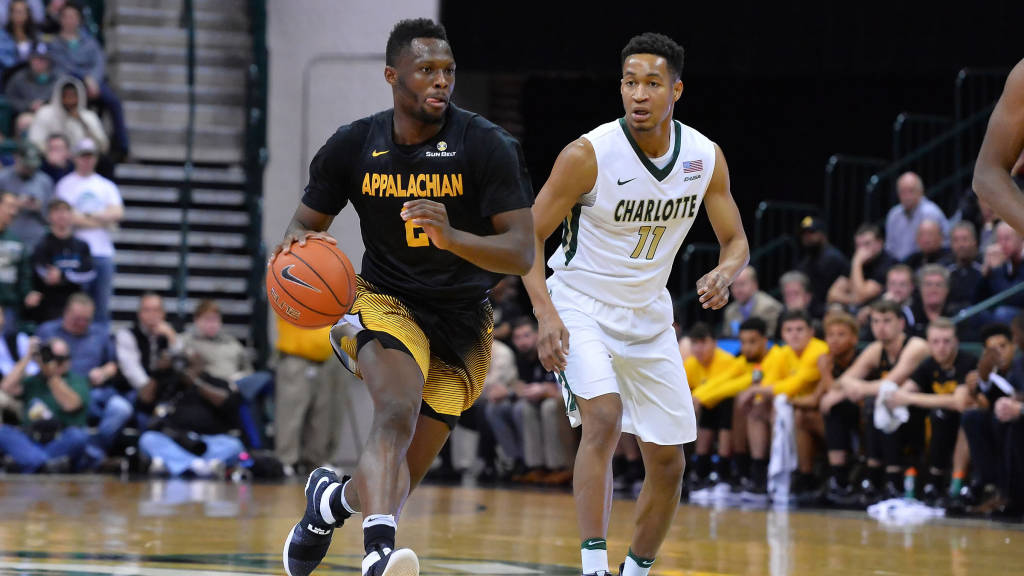 Appalachian State men’s basketball traveled to Dale F. Halton Arena on Monday night to take on the Charlotte 49ers (4-2) in an in-state battle, ultimately edged out by a Charlotte 80-72 victory.

App State (2-4) fell into an early 11-2 hole in the first couple of minutes of the contest and for the remainder of the game seemed to be playing catch up against the up tempo attack of the 49ers (4-2).

“We can’t start the way we did today,” head coach Jim Fox said. “I thought we started really on our heels and we had some bad turnovers at the beginning.”

Both teams turned the ball over early and often throughout the game, with Appalachian having 18 turnovers and Charlotte having 19 in the game.

Sloppy play from the two teams in the turnover department isn’t a huge surprise because of the youth and inexperience of the two offenses along with the athleticism and length of both the defenses.

Freshman Isaac Johnson continued to bring length and youth for the Mountaineers leading the bench in scoring with 12 points and 10 rebounds for his first career double-double along with going an efficient six-for-eight from the field.

“He was great, he did a lot of good things,” Fox said. “He was sensational.”

Appalachian fell down as many as 13 points Monday and got within striking distance multiple times, but could never overcome the production of Jon Davis who ended the night with 19 points and Anthony Vanhook who ended up with 14 points around the paint area.

“We kept putting ourselves in a hole to start the first half, to start the second half and it’s tough to fight back from that,” Fox said. “They’re a good team they got players that can make shots.”

Despite the loss, the Mountaineers saw strong production from starting guard sophomore Ronshad Shabazz who finished with 12 points and freshman Kelvin Robinson with 14 points, who worked their way into the paint throughout the night.

Robinson’s athletic presence was noticeable with his ability to drive to the basket and cause fouls with eight free throws attempted to continue being a bright spot for the Mountaineers.

“We got it close but there was just that one basket we needed that we just couldn’t get to fall tonight,” Robinson said.

App State were led by a distinct zone defense with around six minutes remaining in the game and stopped the 49ers from scoring for over five minutes to creep back into it.

But the shots wouldn’t fall for the Mountaineers late in the game and the team’s lack of an experienced closer showed as the pressure of a close game seemed to be too much dooming the Mountaineers.

Fox called the zone an “Amoeba defense,“ where the length of Johnson was placed near the half court line trying to get in the passing lanes of Charlotte to cause turnovers and disruption.

“It worked out well at the end and it got stops, didn’t allow them to get in a rhythm,” Fox said. “I kick myself for not going to that earlier.”

One of the biggest struggles was being unable to draw as many fouls as the Niners to get to the free throw line, where Appalachian shot only eight-for-15 from the charity stripe and Charlotte shot 14-for-21 in the eight point win.

Despite the loss, App State continues to get a balanced contribution from everyone on the team with the starters scoring 40 points and the bench putting up 32 points.

Appalachian State travels back home to the George M. Holmes Convocation Center to take on a former Southern Conference rival Western Carolina on Saturday at 3:30 p.m. hoping to gain their third win of the season.