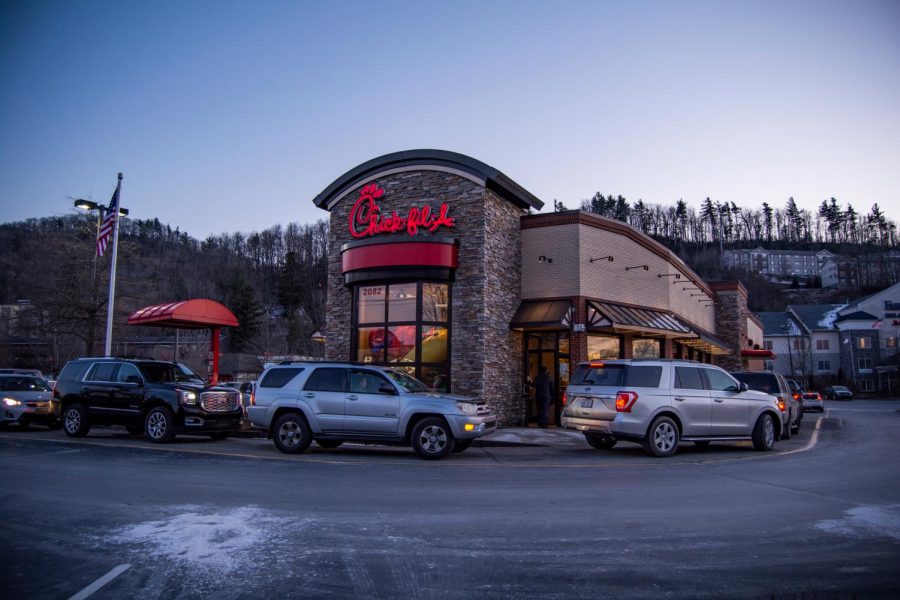 The Chick-fil-A located at 2082 Blowing Rock Road recently put an end to its "College Night" promotion due to overwhelming demand for the business' capacity. The promotion also resulted in parking overflow into nearby Makoto's and Applebee's.

On a typical Wednesday from 5 p.m. to 8 p.m., Chick-Fil-A on Blowing Rock Road is a common place to find college students. This is because of an event called College Night, the “most successful promotion ever,” according to the restaurant’s advertising.

Dec. 14 was the last evening of College Night, a promotional offer that, if a student showed their school ID and bought a large drink and large side, gave patrons a free entree of either a chicken sandwich or eight-count chicken nuggets.

College Night was around for about five years.

“College Night is definitely the busiest dinner rush,” Chick-Fil-A employee Grayson Miller said. “I have heard from other coworkers that it is basically as busy as if it were a game day. Obviously, less catering orders, but the lines are out the door.”

Chick-Fil-A employee Cameron Davis, who works in the kitchen, said College Night caused huge crowds in the restaurant, and the drive-thru line wrapped around the building all night.

To cover business on College Night, Chick-Fil-A was fully staffed with about 13 to 15 employees. Whereas, in a usual dinner rush, there are around seven employees, former assistant shift manager Bethany Jobe said.

“Even with this many people working, it was hard to keep the line short for other customers,” said Jobe, a senior languages, literatures & cultures major. “College Night was usually simple orders, but the amount of orders that had to go out was exhausting.”

According to signage on the building, Chick-Fil-A is no longer able to offer the special due to “capacity issues.”

“It honestly is a lot harder than I think a lot of people think because we’re so busy, and before rush, you still have a lot of customers, a steady stream,” said Miller, a junior advertising major.

Chick-Fil-A managers told employees College Night was discontinued due to a number of reasons. One being that the restaurant could not hold the capacity of business during the event, Miller said.

“(College Night) had become a victim of its own success,” said Jason Ellington, shift manager for both front and back of house. “Our store literally couldn’t keep up with the demands of students, and it was dampening regular sales from customers, such as families.”

“Our parking lot isn’t very big, so we had students parking in Makoto’s and Applebee’s, and we were getting complaints about students filling up their parking lots and then coming to Chick-Fil-A,” Miller said.

Applebee’s Assistant Manager Jennifer Eddiba said cars would back up onto the road that connects the two restaurants.

“Our corporate neighbors have complained to us about (College Night) due to the high volumes of traffic, as have many customers, and some folks have decided not to come to the restaurant due to the size of the crowds College Night has been attracting,” Fogleman wrote.

The kitchen staff feels the most stress during rushes, Miller said.

“It’s with nuggets especially; those go so quickly, and you have to have someone back there constantly filling them by hand,” Miller said. “If you hit a snag, nuggets need a minute or boxes need a minute. Kitchen may be waiting a minute to do something, but we’re still taking orders, so we get really backed up.”

“While it was good to have that many customers, we were running out of a large amount of stock, and the deliveries arrive on Fridays,” Davis said. “This caused issues where we would run out of some items after College Night and not have them for the next few days.”

The elimination of College Night is not the only change this year. Chick-Fil-A also adjusted its menu on Jan. 13.

Chick-Fil-A no longer offers side salads, grilled chicken wraps, regular chicken strips, large milkshakes or decaf coffee. Coffee is also served in one size. Spicy chicken strips and grilled spicy sandwiches with lime cilantro sauce can now be found on the menu instead. Also, for kid’s meals, only five-count chicken nuggets are offered.

Besides the Boone location, restaurants in Charlotte and Hickory also modified their menus, Ellington said.

“The menu is a lot simpler now, and it’s easier to find something you like,” Davis said.

The restaurant promoted the changes on social media, and employees told customers and passed out fliers before the changes occurred. The Chick-Fil-A app has all of the updated items.

“With those changes (to the menu), we’ve definitely had more mad people than with College Night,” Miller said. “And with those two things together, it has not been good.”

“I am personally mad about the College Night leaving because it was cheap, and I knew it was a quick meal when I was in a rush for time,” Sidey said.

Miller said because of the changes, some customers have taken their frustrations out on the employees.

“I’m just a student, just like you,” Miller said. “I feel it. I used the offers, too. It’s the way things go; good things are around for a little bit, and we take them away, and something else comes back.”

Customers can find other offers for the restaurant on the Chick-Fil-A app.

“We plan to identify our more regular guests through the Chick-Fil-A One App and reward them in a way that does not put such a compressed strain on our infrastructure by spreading out redemption windows of similar promotional programs,” Fogleman wrote. “We seek to balance the popularity of a customer loyalty/free entree program with the resources necessary to meet all areas of the business.”