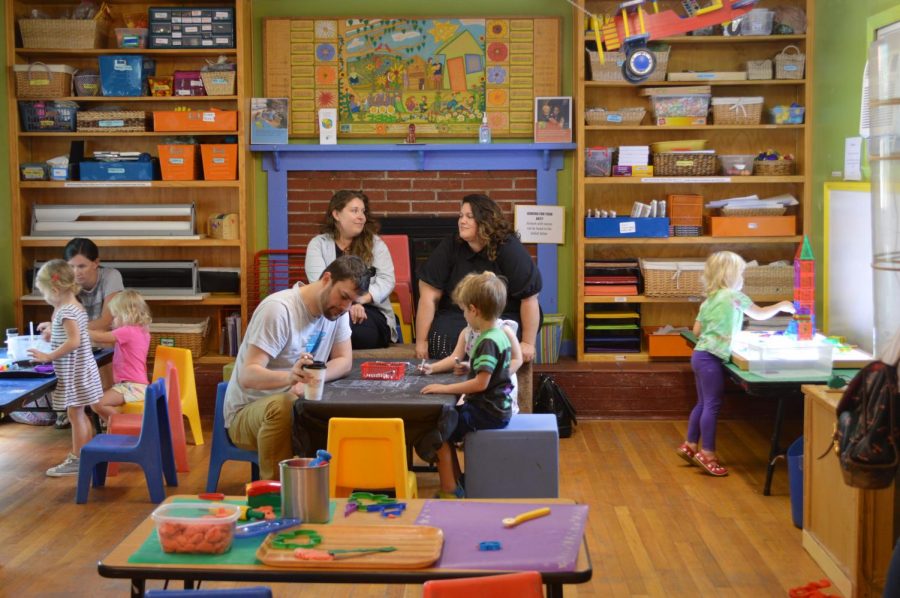 The yelling and bustling of children is an unlikely sound for a college town, except for East King Street on occasional Wednesday mornings. The sounds come from the Children’s Playhouse at 400 Tracy Circle, a colorful building where kids line up for the monthly storytime hosted by Foggy Pine Books.

After reading, Ruthless led children in making their own tea party plates out of craft materials, resembling the plates each monster had in the book. Ruthless said children at the playhouse enjoy coloring and hot gluing, as well as making anything wearable or edible.

“We made cakes one time, and they lost their minds,” Ruthless said.

If a holiday takes place during the month, Ruthless tries to incorporate its theme into the book selection, such as Valentine’s Day in February or Halloween in October.

Program director Kara Flowers said she plans for three to 20 children each storytime. The turnout is affected by weather conditions and time of year.

“Kathy’s been a really big supporter of the bookstore since the beginning,” Ruthless said.

The Children’s Playhouse is a nonprofit children’s museum and developmental playspace, Flowers said.

“Parents bring their children here, and they stay with their kids, and they’re responsible for their kids while they’re here,” Flowers said. “But, we have a lot of different areas that parents can go, and toys and activities that change and rotate.”

Flowers said the museum provides parents with toys and educational items they might not have for their children, while also letting families socialize.

“It’s a great place for parents to come and just find community with other parents,” Flowers said.

There are over 300 current member families, and at least as many visiting families, said operations manager Claire Parnell.

Flowers said when parents ask for bookstore recommendations, she refers them to foggy pine because of its extensive youth section.

Ruthless said a local author will visit Playhouse Storytime next month, reading from a picture book she wrote and illustrated.

The author gives a unique experience to the children because it shows there is a human behind the book, which young kids may not have thought about.

“I think the more you’re exposed to that, the more you realize it’s a possibility for something you can do in your life,” Ruthless said.

Flowers said Ruthless does an excellent job of engaging with community members and authors from all over the state, bringing unique books into the space.

Foggy Pine Books has several author events throughout the year, as well as an open mic story slam once a month. Ruthless said the bookstore tries to collaborate with nonprofits in the area like the playhouse.

The playhouse also provides scholarships for parents, one of which Ruthless received when she was a new mother.

“We came here all the time, and it was a great way to meet other parents and also for him to be socialized,” Ruthless said.

Playhouse facilities include a ball pit, an art room and a climbing wall.

“You can really age with your kids here, and really change what you’re doing with them,” Flowers said.

Along with foggy pine, the playhouse has several other monthly visitors from the community. Toddler music sessions are at 10:15 a.m. before storytime, and Doctor Mike, a physics professor at App State, does a mad science lab.

“We’re a S.T.E.A.M-based museum, so we do science, technology, engineering, art and math,” Flowers said.

Flowers said there are children’s museums around the state and country, and their playhouse is just one example.