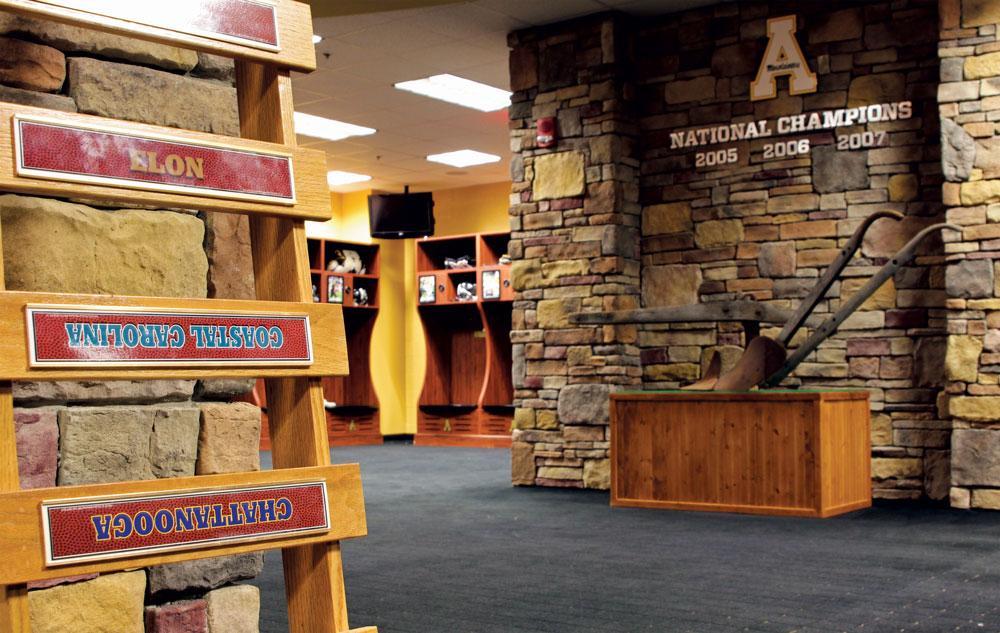 Photo by Paul Heckert | The Appalachian

For Appalachian State football, the first two months of the season served as a true test for the squad in its final season in the Southern Conference.

The Mountaineers notched only one win in its first seven contests of the season, defeating Elon 31-21 on the road Sept. 7.

While App State was defeated handily by Montana 30-6 in the first game of the season and beaten 34-10 by Samford during the homecoming game Oct. 12, three of the team’s first seven losses came by three points.

Despite dropping contests to Chattanooga and SEC foe Georgia, the Mountaineers righted the ship and won three of its last five games to close out the season, including back-to-back Southern Conference wins over Wofford and Western Carolina in the final two weeks of the season.

Freshman running back Marcus Cox was one of the brightest spots for App State as he ran for 1,299 yards and 15 touchdowns, averaging 104.2 yards per contest.

Cox was given all-Southern Conference recognition and was named first-team all-conference by the league’s media. He was also the conference’s leading rusher and posted the third-highest rushing total by a freshman in league history.

Sophomore quarterback Kameron Bryant had a solid year offensively, as well, completing 71.2 percent of his passes for 2,713 yards and 14 touchdowns, starting eight games down the stretch for the Mountaineers in relief of senior quarterback Jamal Jackson, who faced injury issues early in the season.

Leading the wide receivers was senior Tony Washington, who hauled in 64 passes for 939 yards and four touchdowns. The receiver position was especially magnified after former first-team All-American wide out Sean Price was arrested after the first three games of the season.

The App State defense was led by junior inside linebacker Karl Anderson, who started all 12 games for the Mountaineers, compiling a team-high 113 tackles, intercepting two passes and recovering one fumble.

Appalachian State men’s basketball struggled mightily away from home, which led the squad to a single-digit win total and a final mark of 9-21 on the season.

The Mountaineers notched only two wins on the road, going 2-13 away from Boone on the season. The team defeated The Citadel and Samford on the road Jan. 23 and Feb. 27, respectively.

Sophomore forward Michael Obacha, who started a shoe drive for Nigerian children at the beginning of the season, also contributed a team-high 8.7 rebounds per game while averaging 5.4 points per game.

As of April 11, Obacha’s shoe drive had received 700 pairs of athletic shoes and $4,300 in monetary donations to cover shipping costs.

Former head coach Jason Capel’s contract was not renewed following the disappointing regular season mark and App State’s early exit in the conference tournament at the hands of Samford by a final mark of 70-56.

Fox rounded out his coaching staff April 24 by announcing the hiring of Jason Allison, Bryan Lentz and Mantoris Robinson as assistants.

App State women’s basketball added five freshmen heading into the 2013-14 season and the Mountaineers ended its season with a record of 13-16 and a Southern Conference record of 10-8.

After two losses to start the season, the Mountaineers won their first game against Lees-McRae on Nov. 15 before falling into a five-game losing streak.

Before the Southern Conference games began, the team took a total of three victories against Radford, UNC Wilmington and Lees-McRae. The victories were overshadowed by the eight losses the team also suffered early in the season.

The Mountaineers turned the season around with the start of conference games. During conference play, the team took 10 more wins and only seven losses before the conference tournament began.

The Mountaineers took revenge on Elon University, Western Carolina University and Furman University, who had defeated App State earlier in the season, by beating all three teams during the respective rematches during conference play.

Despite leadership from junior forward Maryah Sydnor and junior guard Katie Mallow, App State was defeated by Elon in its first game of the Southern Conference tournament.

App State battled to the end of their last match against Elon but lost 56-59 after Sydnor’s desperation 3-pointer at the buzzer was no good.

App State’s roster moving into the Sun Belt Conference will look similar as the team is losing only two seniors, Jessica Barrios and Michelle Taylor.

With so much improvement shown by the team as the year’s season progressed, the success is expected to continue from the much more experienced team in the 2014-15 season.

App State head coach Billy Jones’s second season at the helm featured seven of the first eight games pitting the Mountaineers against nationally ranked foes in No.25 Arkansas and No.6 N.C. State. The Mountaineers also faced No.14 Clemson, No.22 UNC-Chapel Hill and the No. 1 team at the time in South Carolina.

The 2014 season saw the return of fifth-year senior infielder/outfielder Tyler Zupcic, who sat out last season after sustaining a severe lower leg/knee injury during a game against Oklahoma in the 2012 Charlottesville Regional. Sixth-year starting pitcher Tyler Moore found his place in the starting lineup this season as well and has been impressive going 8-3 on the season, tied for seventh nationally.

The freshman class of 2014 has not disappointed as outfielder Matt Brill emerged as a key leader for the team in batting, holding the longest hitting streak on the team at 15. Pitcher Sean Mason pitched an 11-0 shut out at Virginia Tech and allowed only two hits in the game.

The Mountaineers participated in the prestigious Irish Baseball Classic in Cary at the USA Baseball Complex earlier this season, going 1-2 at the tournament.

Looking for more success, the Mountaineers hit the road in a series of tournaments across the country to start the season.

The road swing posed some challenges for the Mountaineers who won just seven out of 21 games between Feb. 6 and March 9.

Despite its standings in the Southern Conference, App State has excelled in certain areas of the game, such as pitching and batting.

Junior pitcher Alissa Schoelkopf was named the North Carolina Education Lottery Southern Conference Student-Athlete of the Week for the week of April 2.

Schoelkopf set a season-high for strikeouts in a game with 10 in her most recent start on the road at conference foe Samford on March 29. The junior pitched a season-high 7.1 innings, allowing just five hits and three runs to go along with her season-high strikeout total.

The Mountaineers finish its season on the road in a three game series at conference rival Furman before heading to Greensboro for the Southern Conference tournament that is set to begin May 7.

Closing out an era never felt so promising:

In the final year of play in the Southern Conference, many of the high profile App State sports yielded disappointing results.

But thankfully, there were more positives to this year than some may realize.

In the fall, the university’s commitment to producing hard working scholar athletes was affirmed with the announcement that 254 students were named to the Athletic Department academic honor roll for the fall semester.

This news came after a tough year for the Mountaineers’ football team, which showed tremendous resolve by winning three of its last five games in a season in which the team could not qualify for postseason play due to their impending conference move.

I was encouraged by both the resilience of the football team as well as the academic performance of the athletes that represent our university.

But the good feelings didn’t stop there.

When basketball season began in January, it was announced that sophomore forward Michael Obacha would be working on a shoe drive for children from his home country of Nigeria – a satisfying reminder that athletes often think about more than just themselves.

Obacha’s drive raised 700 pairs of shoes and more than $4,000 to cover shipping costs. This is a testament both Obacha’s kindness and to the loyalty of App State’s community of sports fans.

The basketball season came and went as both the men’s and women’s teams were eliminated in their first games of the conference tournament in Asheville. Refreshingly, neither head coach seemed defeated, but rather pointed out the positives of the respective games.

Similarly, the baseball and softball teams have stayed the course despite difficult early-season schedules and tough results.

Essentially, the character and fight that the Mountaineer student-athletes have shown since the beginning of this year makes me very excited.

If this year proved anything it was that, beyond tangible results, the Mountaineers are ready for that attention.

App State is ready for the Sun Belt.