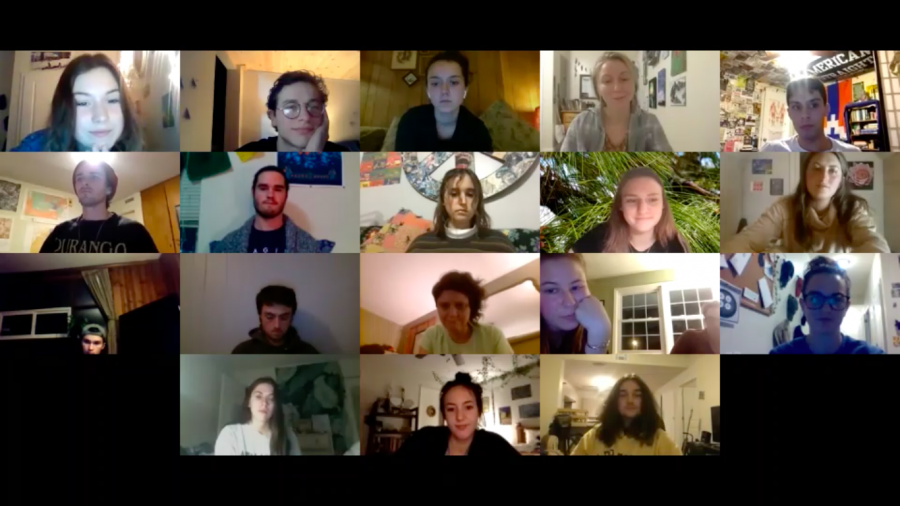 Community members meet over Zoom to discuss solutions to the environmental issues facing the High Country. This was ClimACT's first people's assembly.

“Our community continues to be exploited and ignored by those who should be serving us,” ClimACT published in a statement on Instagram. “With a collective understanding, united voice and public pressure, we can take back control in our community.”

ClimACT, a group of students, faculty and Boone residents, advocate for local climate justice and, as of late, are calling on New River Light and Power to be a part of the solution.

Following the release of their proposed plan to make App State climate neutral, ClimACT members held the people’s assembly to find solutions collectively and project their voices together.

Michael Weiss, a ClimACT organizer, said he was pleased with how the event went, adding that “it felt great to see how many people were concerned and willing to show up and fight for change.”

Weiss, a senior, believes ClimACT’s effort is imperative to the change-making process. But, he added, “it is just a first step.”

“We need to hear from more people, especially non-students and the people who are facing the brunt of these issues, and let them guide the process as well,” Weiss said. “And while we have a strong group of organizers, we also know that without continued support, input and involvement from those who showed up today, not much will change.”

App State senior and ClimACT member Aidan Malone spoke to the group about energy democracy, which emphasizes the importance of public participation when working to remedy energy issues in a community, such as lack of solar usage, an idea the collaborative is centered upon.

In conjunction with energy democracy, the organizers proposed over a dozen solutions throughout the event that they say would promote policy improvement and strengthen the community.

ClimACT organizer Bob Hughes gave a presentation about renewable energy options, saying that “clean, well-priced, reliable and locally produced energy” is a human right that should be available to all.

“Right now, if it weren’t for laws preventing utility shut-offs, thousands of people wouldn’t be able to pay for the electricity they need,” Hughes said.

New River Light and Power, the energy provider for App State and large parts of Boone, purchases its power indirectly from Duke Energy. This fuels the continued use of natural gas, oil and coal. ClimACT argues that, because NRLP is linked with App State, students deserve more of a voice in the decisions NRLP makes.

Lauren Hinson, another ClimACT leader, said NRLP is “failing to serve” the public by not making its financial data public – making it difficult for ClimACT to assess possible solutions – and using an estimated less than 2% renewable energy.

“The utility that is meant to serve the public is contributing to climate change and making it difficult for many of us to live,” said Hinson.

Hinson believes policies and infrastructure should be made to “generate community wealth, support people facing challenges and contribute to a healthy future.”

Considering the recent climate resolution passed by the Boone Town Council, Hinson emphasized this is the moment for community members to let their voices be heard. Moreover, NRLP starts a new energy contract in 2022.

Among these proposals was starting a community solar project, a local solar farm that would provide for everyone as opposed to individuals having solar panels installed on their own homes. They also spoke on the prospect of weatherizing homes to better withstand the cold and heat while simultaneously reducing energy consumption. Net metering was also discussed, a billing mechanism that would credit homeowners with solar panels for the excess energy they produce but do not use.

The ClimACT leaders concluded the assembly by sending the participants into Zoom breakout rooms and fostering conversation about further solutions. Stressing their aim of public participation, leaders asked participants to introduce themselves and explain why they joined the cause.

Dave Freireich, a 1997 App State graduate who started the non-profit Harmony Lanes, came to share his organization’s mission to establish better infrastructure in Boone that would allow people to get around on a bike or by walking.

Rachel Milkereit, a senior biology major and member of the App State forestry club, said she was excited by the idea of incorporating forestry initiatives. Doing so could provide the community with edible plants and wood for the winter months.

Herb Hash, a member of Climate/Transition Blue Ridge and former App State philosophy and religion professor of 23 years, said he has developed an interest in environmental issues and applauded students who recognized the “real crisis.”

“This is where y’all come in,” said Hughes. “What do you want to see be done for the community? Your voices, ideas and visions deserve to be heard by those in power. Literally.”

Correction: A previous version of this article incorrectly credited reporter Jake Markland to the feature image. The mistake has been corrected.