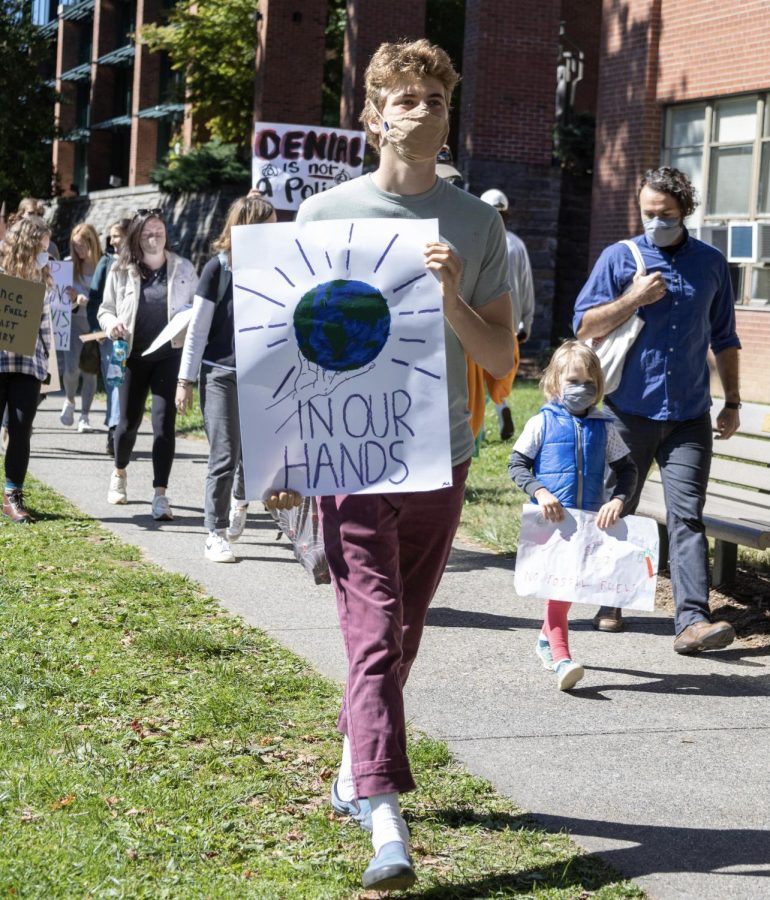 ClimACT and its supporters marched across campus Sept. 24 after attending the board of trustees meeting that day to demand climate action.

As part of the Global Climate Strike, dozens of students and Boone community members filled the Plemmons Student Union with emotional stories of climate activism outside a closed session board of trustees meeting.

Members of ClimACT attended the BOT meeting at 2 p.m. Sept. 24, holding flyers and standing silently along the walls. More people gathered outside of the closed session afterward, protesting the BOT’s silence and listening to people’s climate stories.

In April, ClimACT sent a list of four climate-related demands to BOT members, which they want to see implemented at App State by Dec. 3.

Chief Communications Officer Megan Hayes said in an email Chancellor Sheri Everts is the only person with the authority to make decisions about the university’s climate action plan, not the BOT.

The climate activists marched through campus afterward, where they led chants and carried posters.

“The goal of that is just to raise awareness that this is a global movement, and it extends beyond Boone,” said Sarah Sandreuter, junior sustainable development major.

The Global Climate Strike from Sept. 20-27 was a way of drawing attention to the climate crisis. On Sept. 24, people were encouraged to skip school or jobs to raise awareness, with a total of 1,557 strikes organized worldwide, according to youth-led movement Fridays for Future.

After silently attending the BOT meeting June 18 and emailing BOT members afterward with no response, Sandreuter said the group wanted to convey the message that being ignored by the BOT will only motivate ClimACT more.

“After Friday’s board meeting, one of the Trustees went into the hallway to greet the demonstrators, offered his contact information and began a dialogue,” Hayes said. “Unfortunately, the response to this entree was curse words being shouted at him.”

On Sept. 24, both Sandreuter and professor Brian Burke were told to leave the meeting after attempting to speak during it.

At the end of the meeting, a sustainable development professor and a member of ClimAct spoke out, and were escorted out of the room. pic.twitter.com/WYS2ztEk9a

Burke, associate professor in the Department of Sustainable Development who has been involved with ClimACT since 2018, was told to leave after requesting the floor to raise the issue of considering their demands that several other university groups have already unanimously agreed to.

“We’ve been ignored time and time again,” Burke said. “Given that we’ve gone through all of the official channels for making change and been ignored, really the only options left to us are to find new channels to make change.”

Burke said ClimACT will continue to show up to these meetings until changes are made because “we can’t just sit around and let a bunch of unresponsive administrators run our future into the ground.”

This was Sandreuter’s statement after Burke’s: “We are here because it’s our futures at stake, and you are our decision-makers and you are our leaders. We want you to listen to us and we want you to work with us because you represent us all and you have the duty to do what’s right,”

Senior sustainable development major Max Shirikjian said the meeting was a win because the BOT addressed the university’s climate action plan, as well as the university’s increase from under 2% to 15% renewable energy purchasing, which he felt was due in part to ClimACT’s pressure.

Hayes said that increase is due to the university’s new contract with Carolina Power Partners beginning Jan. 1 next year as well as the combination of App State’s commitment of $100,000 and the Appalachian State Renewable Energy Initiative’s contribution of $50,000 to the university’s purchase of hydroelectric power.

“This is an important demonstration of a student-led, student-funded organization working cooperatively with university administrators to effect important purchasing changes,” Hayes said.

Everts wrote in a school-wide email Oct.1 that, “Chief Sustainability Officer Lee Ball has a campus sustainability update underway that will be shared with campus in the coming weeks.”

Shirikjian said the increase in sustainability talk was a sign that everyone will get more done by working together, and if “we could sit down together at a table and try to come to solutions to these issues, we would all be much happier.”

SGA President Bailey Gardin was supposed to have time to speak and campaign for ClimACT’s demands during the meeting, according to Shirikjian.

Though there was no time for Gardin to make a statement during the BOT meeting, he said he and administration members feel more work can be accomplished through talking about sustainability initiatives with individuals in the same room.

“I think there’s a lot of misconceptions from both groups,” Gardin said. “Everybody needs to sit down and have an honest, open and transparent conversation, and I’m going to take that upon myself along with members in administration to help facilitate that.”

Freshman Autumn Ash spoke outside of the BOT closed session about how the BOT is taking money from students, “and they’re not listening to us about where we want the money to go, and they’re lining the pockets of people who are way richer than we are and in turn killing our future generations.”

Though not a part of ClimACT, Ash wanted to be part of something that can make a big change, and also attended the march to the Founders Plaza afterward.

“It makes me super happy to see that all of these people care this much about something that people are pushing under the rug,” Ash said.

In terms of next steps, Sandreuter said for the next BOT meeting Dec. 3, ClimACT plans on filling the room with as many people as possible.

“We hope that sends a message that we’re going to do whatever it takes to make our voices heard, and whether that’s just not playing by their rules, then so be it,” Sandreuter said. “If they don’t want to respond to our asks and our emails and our other democratic ways of getting heard, then we’re going to have to resort to other methods.”

All protesters left the student union and marched to the Founders Bell Pavilion, where people are speaking and chanting next to Blowing Rock Road. pic.twitter.com/6TQKJhC2jk