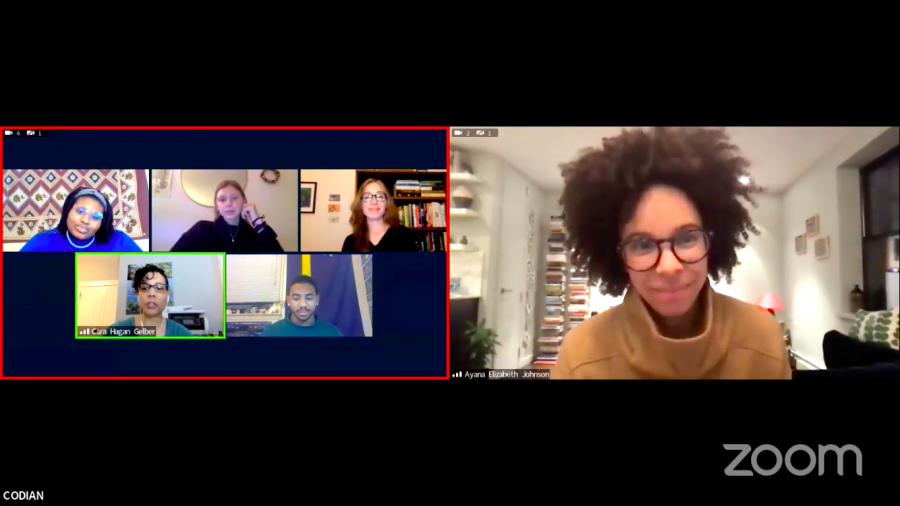 Ayana Johnson, right, speaks with students and instructors virtually Thursday. Johnson is the founder of a climate think tank, co-host of a climate solutions podcast and co-founder of a campaign to promote feminist climate leaders.

App State students and faculty facilitated an event with a leading voice in the climate movement to ask questions about how to resolve the climate crisis and not leave anyone behind along the way.

Ayana Johnson is the founder of a climate think tank, co-host of a climate solutions podcast and co-founder of a campaign to promote feminist climate leaders. One major focus of the event was the anthology “All We Can Save: Truth, Courage, and Solutions for the Climate Crisis,” which Johnson co-edited.

“If you care about the people that you care about, you need to take care of them and that means making sure we have a world where we can keep living,” said Johnson.

Johnson, a marine biologist with a doctorate from Scripps Institution of Oceanography, spoke about ways to resolve the climate crisis, many of which revolved around the need for a Blue New Deal in addition to the Green New Deal resolution introduced by Democrats in Congress in 2019.

The Blue New Deal, which Johnson created while advising Elizabeth Warren’s presidential campaign, calls for additional focus on the ocean within the Green New Deal. Johnson argues this is a necessary component given the impact coastal communities have on the American economy and the hit the ocean has already taken due to climate change.

“Renewable energy offshore and regenerative farming in the ocean and protecting U.S. coastal ecosystems are massive opportunities,” said Johnson. “And if we leave them out, we’re just blowing it.”

The intersectionality between climate change and race is also a focus of the Green New Deal and Johnson’s recent work. Johnson said that people of color and low-income communities are disproportionately “getting screwed” by climate issues.

“But focusing just on who is being harmed is a missed opportunity to talk about who should be leading,” said Johnson.

After the murder of George Floyd, Johnson wrote on op-ed – “basically a letter to white environmentalists” – saying that the environmental movement will fail unless it is inclusive and builds the biggest team possible.

All of this culminated into Johnson’s argument that “the climate crisis is a leadership crisis.”

“The climate crisis is the result of social, political and economic systems that are widely skewed to benefit those who already have so much,” Johnson read from the opening of her book. “To transform society this decade, the clear task science has set before us, we need transformational leadership.”

To solve the climate issues the world faces, Johnson says there needs to be a “right” and diverse set of leaders but overall, more leaders.

Laura England, founder of Climate Stories Collaborative, was looking for a way to “grow and deepen” the climate conversation on App State’s campus and reached out to Johnson several months ago, “a source of inspiration” and “climate hero” for her, to see if she could come and speak.

England wanted the event, which 250 people attended, to be student-run and asked her sustainable development classes for volunteers, all of whom are reading Johnson’s book in class this semester.

“I didn’t want to miss an opportunity to talk to such a powerful leader in the climate change movement and in the Black Lives Matter movement,” said Justin Sykes, one of the student facilitators.

Grace Ruffin, a junior public health major, said it was one of the most impactful events she has ever attended. She said Johnson’s words and research made it clear that the connection between social justice and climate is “undeniable.”

Sykes, who wants to do social justice work after college, said he hopes the event will make people more aware of the intersectionality of climate change and racial justice work.

Likewise, England wanted the conversation with Johnson to serve as a space where anyone passionate about climate could come together, regardless of their current knowledge of it.

“No single one of us can fully understand or have all the answers. It takes the we,” said England.