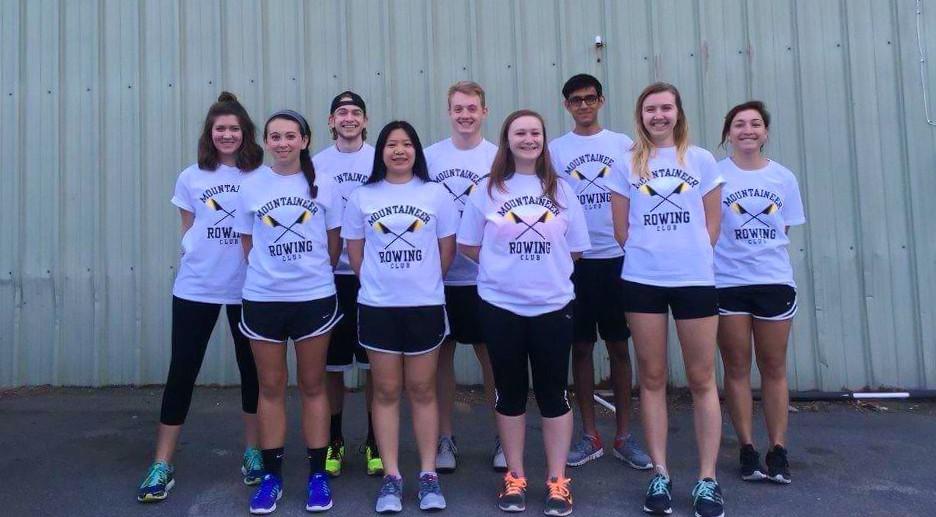 The team moves in sync, working together to try and get through each meter and complete the distance. If they can get through one meter, then they can get through the next. Everyone knows that they are vital to finishing the race. For those involved with Appalachian State’s newest rowing club, Club Crew, this is the typical mindset at each practice.

Crew, as it is commonly referred to in the U.S., involves a team of people rowing a boat in synchronization during a competition. Different crews gather to compete against each other at events known as regattas.

Emily Howard, a junior health and physical education major, enjoyed the sport and wanted to continue rowing in college. She was disappointed to find out that Appalachian State didn’t have a rowing team and decided to start Club Crew in November 2015. Howard spread the word about the club through informational fliers she posted around campus.

“It’s been a lot of red tape and paperwork and stuff, but it’s okay,” Howard said. “It’s been kind of fun and cool to see it all come together.”

The team practices three times a week despite not having a boat at the moment. They are working on buying a $1,500 boat from Gainesville Area Rowing, in Florida. To make up for not having a boat, they use ergs, or indoor rowing machines, twice a week at SpinRow Gym to simulate when they will actually be on the water. Additionally, they practice weight training at Quinn Recreation Center every Thursday at 7 p.m.

Since Club Crew accepts people with no prior experience, Howard structures the practices in a way that is beginner friendly but also is beneficial for those who have rowed in the past. The team usually spends thirty minutes with the ergs and spends the rest of the time doing cardio to build strength and endurance.

The team has been beneficial for Howard because it has allowed her to gain some hands-on experience with physical education before she enters the professional field. Until the team can afford to hire a professional coach, Howard leads the practices and organizes most of the team.

Howard said she hopes that by the end of the semester, the team will have the boat and be able to practice out on the water. Her ideal spot to practice is Watauga Lake in Tennessee because it is large enough for them to practice rowing long distances.

Howard wants everyone that has not had a chance to get out on the water to be able to experience it and for new rowers to get experience.

“We haven’t even been on the water yet and I’m already loving it,” junior political science major Morgan Pilchards said. “I can only see my excitement growing when we get on the water.”

Pilchards believes that starting in the gym has been beneficial because it has allowed her to build up the strength and endurance she will need once she is on the water.

One thing that sets rowing apart from other organizations and sports is the importance of teamwork, Howard said.

“The sport is mostly about teamwork because everyone has to work together to keep on going,” Kathryn Pryor, freshman actuarial science major, said.

Howard said she also believes that rowing is a good way for young adults and adolescents to build leadership skills because it requires everyone to be a leader, but also follow the commands of others.

“It helps you to put aside your own problems because other people are depending on you,” Howard said.

“The feeling of being together is like a machine,” Shepard said. “You feel so connected to each other. It’s one of the coolest experiences.”

Shepard started rowing his junior year of high school. During his first two years, he played several different sports but didn’t feel passionate towards any of them.

“I never really connected with any other sport, but with rowing, it just really clicked with me,” Shepard said.

“I feel that it will bring a whole other demographic to this school and will make us more competitive in different ways with universities,” Howard said.

Shepard said he is excited about how the rowing team is coming together, and is looking forward to the future and everyone becoming closer and better at the sport. He hopes that the team can grow enough to be recognized as an official club sport.

“A lot of my friends row at UNC right now,” Shepard said. “I would love to be able to compete against UNC, not even to beat them, but just to see those people again. I think rowing is just a connection type of thing.”

Pilchards had no prior rowing experience, but decided to join after seeing a flyer. She currently serves as the secretary of the club and has enjoyed the experience so far.

“I’ve always been interested in rowing, so when I saw the flyer that said ‘no prior experience needed,’ I decided to do it,” Pilchards said.

Pilchards said she enjoyed getting to know everyone through the workouts and times that they have gotten dinner together. She believes that being secretary has been helpful to her as well because it has required her to really get to know everyone in the club.

It has been a good way to meet people outside of her usual school routine, Pilchards said. She also particularly enjoys the fitness aspect of the club and being around people who also enjoy the sport.

Pilchards hopes that by the end of the semester they have the boat and are able to row on the water.

“I think eventually our ultimate goal is to be a recognized club sport,” Pilchards said.