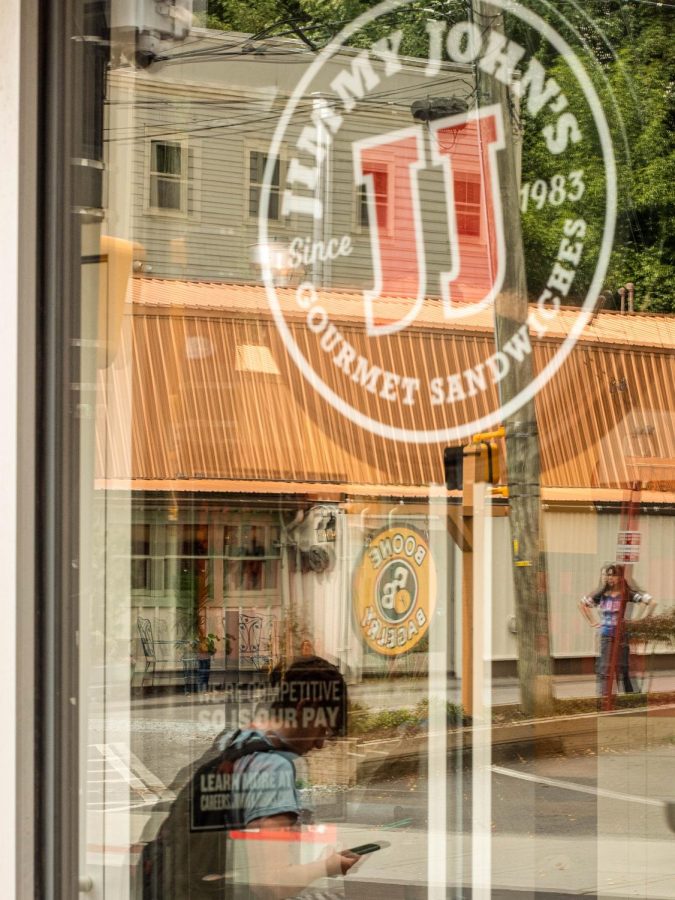 Boone Bagelry reflected in Jimmy John's window across King Street Boone, NC. Hanging in the store is a sign that says "We're competitive so is our pay." Boone Bagelry has been locally owned and operated since 1988.

I have lived in Watauga County, at least in some capacity, my whole life. Truth be told, I don’t think I’ve ever been outside of the county for more than two consecutive weeks as long as I have been alive. Boone is my home through and through, and watching this place grow and change has been almost as painful as growing up myself.

I can remember being a little kid, back when App State was just a feature of Boone instead of the other way around. I learned how to swim at the Student Recreation Center at the age of five and spent most of my snow days at my dad’s office in the Convocation Center. The housekeepers there doted on me and my sister like we were their own. Most of my elementary field trips were spent going to Farthing Auditorium, renamed now the Schaefer Center for the Performing Arts, to see some kind of show. App State has always been my second home, a place I have felt comfortable and confident. But this is not the same university, or Boone, I grew up in. And sometimes, that really, really sucks.

I want to preface what I’m about to say with this — I love Boone. I want as many people as possible to experience how magical and special this area is. I’m not some grumpy local sitting on my front porch shaking my fist at the students and tourists, although sometimes I’d like to. It’s hard to watch the greed of Chancellor Everts and property developers ruin this place. Watauga County cannot physically handle any more students. There is not enough water, housing and patience for more than 20,000 students, if even that. Not to mention the scourge of folks trying to buy vacation homes up here. I’m sorry, but if you spend nine months out of the year in Miami or New York City, you don’t deserve a million dollar home on top of Snake Mountain.

So who deserves to be in Boone? Or live in that million dollar home?

I don’t think trying to answer that would do a bit of use. The only thing I know for sure is the families who have lived in Boone for generations can’t endure this much longer. The Boone we live in right now isn’t the one my parents or grandparents grew up in, and that’s to be expected. Nothing stays stagnant forever. But for Boone to have changed to the point of being almost unrecognizable in the 20 years I’ve lived here is scary.

The magic is gone. The sense of community I felt on campus as a child is gone. Childhood, with all of its wonder and whimsy, is gone. It’s a strange thing to mourn your hometown when you still live, work and go to school there. On paper, not much about my life in Watauga County has changed in 20 years. Despite this, I feel a world of difference when I look around. Whether this is a result of the aches and pains that come with adulthood or from the many physical changes Boone has undergone, I can’t say. I just know it isn’t the same, and I miss how it used to be.