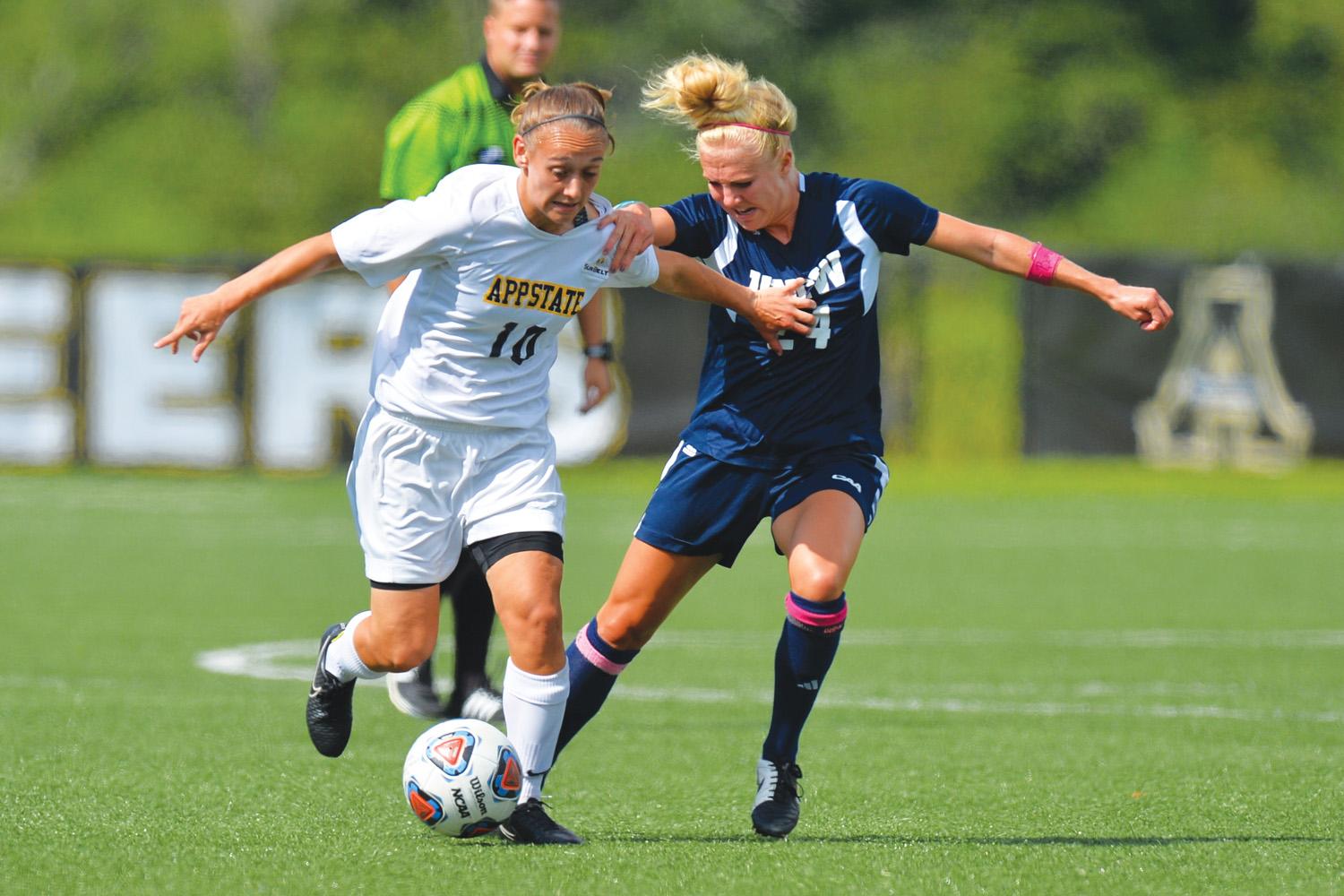 The game began slowly for the Mountaineers as senior Wilmington forward Maddie McCormick scored a right low corner shot to give the Seahawks a 1-0 lead 15 minutes in to the game. The rest of the first half had a lot of mistakes and shots on goals by the Mountaineers as Wilmington held a high line and played much more aggressive.

Once halftime arrived, App State’s sixth year coach, Sarah Strickland, felt the girls had a lot more inside of them.
“The girls were very relaxed when they first came out and I told them at halftime that the relaxation is going out the window,” Strickland said.
Part of the reason Strickland felt the girls came out so relaxed was because of the atmosphere in the Ted Mackorell Soccer Complex.

“When I got here I was blown away at how much of the investment the administration and High County had put into the stadium for this season,” Strickland said. “It felt like a real collegiate stadium. When the girls game out, it was kind of overwhelming for them knowing this was their new home.”

With the second half in play, some of the mistakes continued for the Mountaineers as senior goalkeeper Megan Roberson committed a foul to have Wilmington score a penalty kick to take 2-0 at the 71st minute. The Mountaineers didn’t let this get to them because of their halftime strategy to help them get back into the game.
“We actually didn’t go in the locker room because our first half was so flat,” senior forward Sam Childress said. “We stayed out on the field to change it up a bit and get the momentum going.”
At the 75th minute, a 15-minute comeback began for the Mountaineers as freshman forward Emmily Cowie made her mark on the team with a goal to narrow the deficit to one.
“Scoring the goal was awesome,” Cowie said. “It’s cool to have our first home game here at Ted Mack, and to be a freshman and help contribute to the win. As a team it was amazing.”
Not only did this goal help put the Mountaineers in reach for a comeback, but it built a lot of confidence for Cowie and the rest of the team.

“I just wanted to become part of the team,” Cowie said. “This definitely builds up my confidence a lot. There are still a few more games but it helps me feel more relaxed on the field.”

With momentum swaying the Mountaineers way, Childress, last year’s leading scorer on the team, shot an assisted header from senior defender Merlin Beckwith from the right side to tie the game at the 79th minute.
“In the second half we pulled it together and played as a unit, and that’s what we did during preseason, play together and find a way to win,” Childress said.
As the game felt like it was heading to overtime, the team felt they had just a little more inside of them.

“We were ready to play as a team and do everything we had inside of us even when it’s hot out and we are tired and hurting,” Beckwith said.

With only two minutes to play, App State was fouled in the penalty box, which gave the opportunity for Merlin Beckwith to score the game winning penalty kick to make it a 3-2 lead for the Mountaineers as they closed out the final two minutes for the win.

This comeback victory not only gave App State their first win of the season, but it gave them confidence and determination that could lead them the rest of the season.
“We had 45 minutes left after the first half, and the atmosphere was incredible,” Strickland said. “UNCW came out at a high level and we had to match that. I think any time you go down two goals, and come back, I think it shows character, grit, and determination.”
Forward Sam Childress, who had three shots and a goal, felt the second half was just growing and building themselves as a team.

“In the second half we pulled it together and played as a unit,” Childress said. “That’s what we did during preseason, play together and find a way to win.”

Beckwith, who scored the game winning penalty kick and had one assist, knows this game gave them confidence, but still feels the team has a lot of work to do and has to learn from the game.
“The energy, and what we put together today on the field, we will take with us,” Beckwith said. “But we have to take the next step to the next game and the rest of the season.”
App State women’s soccer definitely gave students a reason to be excited for the rest of the season with their comeback victory. With three leading seniors in Beckwith, Childress, and Kate Ward, who had two shots and one assist, along with Cowie, the Mountaineers seem primed for the rest of the season.

The Mountaineers play their second game of the season at home Aug. 28 against Radford at 7 p.m.