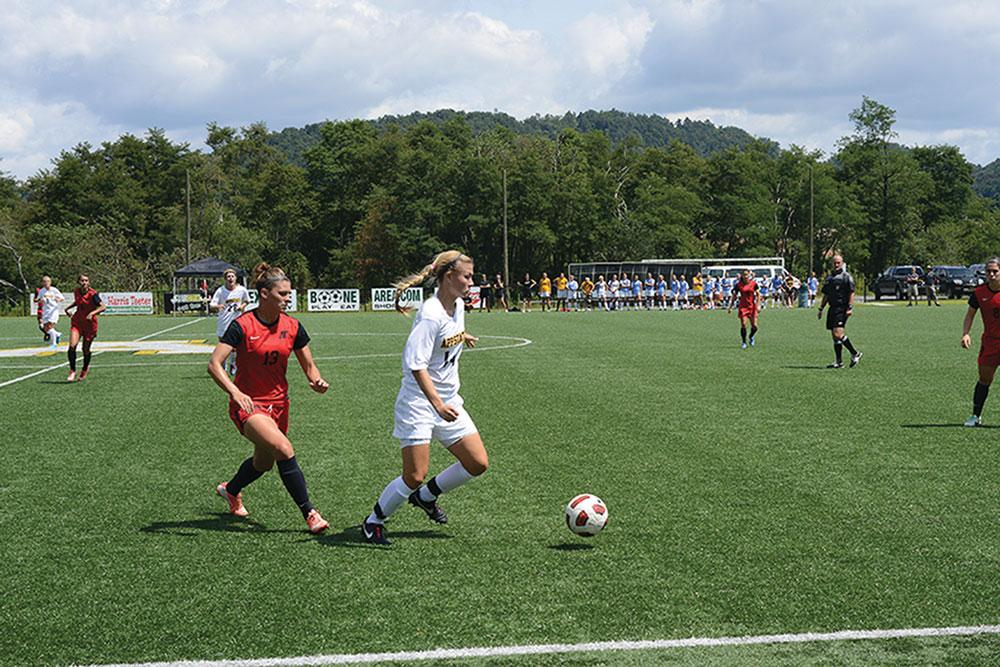 Junior forward Samantha Childress hustles down the field last season against Austin Peay University. The Mountaineers lost 1-2 to the Governers at the Ted Mackorell Soccer Complex. File Photo | The Appalachian

App State women’s soccer is off to a slow start, as they find themselves 5-6 overall and 2-3 in its last five games.

However, head coach Sarah Strickland said she was expecting a tough beginning to the team’s first Sun Belt season after setting up a tough schedule.

The best, she said, is still yet to come for her team.

“My goal [was] to make the toughest non-conference schedule and that can impact how highly we are ranked throughout the country,” Strickland said. “If we played worst teams, we wouldn’t be prepared and would have a much lower ranking.”

The Mountaineers have played two teams this season that went to the NCAA tournament last year, Liberty and Morehead State. They have also played eight of 11 games on the road.

The Mountaineers have taken care of business at home, defeating Liberty, the reigning Big South Conference Champion, 4-3 in overtime and demolishing Belmont University 4-1. App State’s first loss at home came at the hands of George Mason by a score of 0-2.

Alyne Moore, senior public relations major and student manager of the team, said she has a lot of confidence in the team.

“I have confidence that they’ll be able to bounce back and start winning a lot of games, especially with the tough away schedule coming up,” Moore said.

The Mountaineers have begun conference play with a 2-0 record after road victories over Arkansas-Little Rock and Arkansas State.

The Mountaineers don’t return home until Oct. 10 when the team takes on Troy.

“I’m really confident with our away schedule,” Moore said. “I feel like the upperclassmen players on the team will motivate the freshmen and make sure they are doing what they are supposed to do to help the team succeed.”

“We need to come together and realize what our main goal is,” Cline said. “We need to be there to support and motivate each other to help us win.”

In the Mountaineers’ six losses, only two have come by more than one goal.

Strickland said that is indicative of playing a full game with maximum effort.

“We need to put two great halves together consistently,” Strickland said. “[That] is something easy to say, but actually can be very hard to do. Soccer is all about consistency.”

Senior defender Nicole Steyl said the veterans of the team are excited about what the team can accomplish now that conference play has started.

“I think we’re a great team, we’re very deep, we’re very focused, we’re driven and we’ll come out strong,” Steyl said. “We have a connection that not a lot of other teams have. All of that combined, including investment and commitment, makes me think we’re going to win.”

Senior forward Jenn Bass said the team has been patiently waiting for an opportunity to show the Sun Belt how App State plays.

“I think we’ll destroy the Sun Belt,” Bass said. “I think once we get everything figured out, we’ll be like a runaway train and no one can stop us.”

Bass said one of the strengths of the team is the bond the players and coaches share in supporting one another.

“I love the fact that we all believe in each other,” Bass said. “This is my first year playing since I’ve torn both of my ACLs, and I came back and wanted to play for this team. How close we are and how everyone believes in each other is absolutely amazing and it’s what keeps me going.”

The Mountaineers are back in action Sunday with a road matchup with Texas State. The game will begin at 1 p.m.

“I’m very proud of these girls and the staff and how hard they all work,” Strickland said. “I’m just grateful for the support that we get from Appalachian State students.”