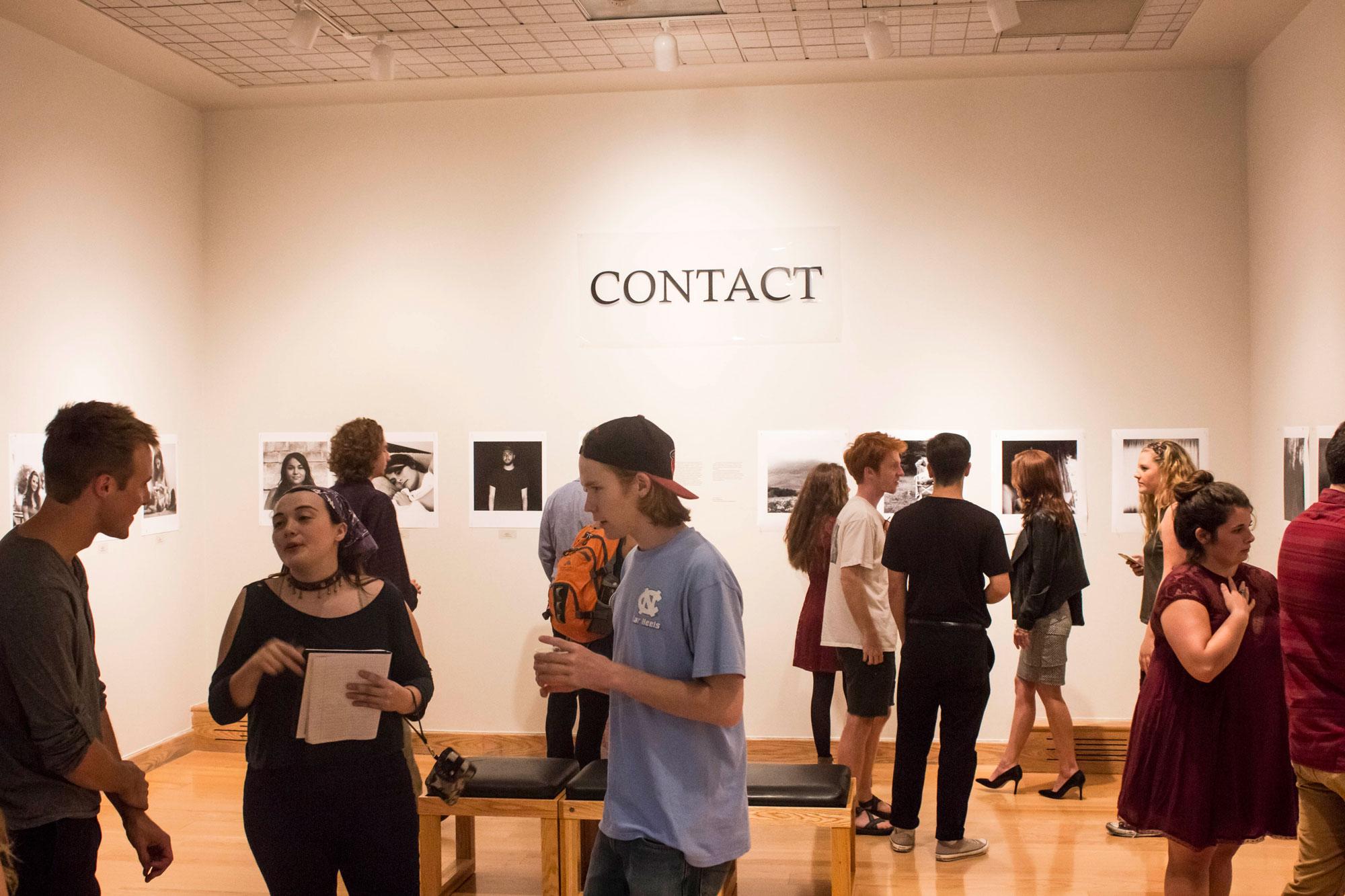 Senior studio art majors Alec Castillo and Chastan Swain chose to name their split photography show “Contact,” before being exhibited at the Looking Glass Gallery in the Plemmons Student Union on Sept. 18.

“Contact” featured 25 black and white images of various portraits with subjects the artists feel close and intimate with. Fifteen photos belonged to Castillo and 10 belonged to Swain. Throughout the night, over 75 people visited to view the exhibition.

Castillo’s 15 photos came from his first long-term and continuous series called “Let The Kids Be Kids.” Castillo explained his passion for photography stemmed from skateboarding.

“I liked how you could look at the world as a playground, and keep your imagination racing,” he said. “Skateboarding definitely trained my eye for photography.”

Castillo’s “Let the Kids Be Kids” tells his personal story of familiarity with his life and close friends. Castillo started about two years ago on the series when he was inspired to show the importance of relationships.

“I didn’t really know what I was doing until the photos I was shooting began to have a cohesive feel together as a visual narrative,” Castillo said.

Swain said his selection was mostly comprised of traditional portrait photographs of people he feels a “closeness” with. Swain’s continuous series, from which the photographs come, is called “Proximity.”

Castillo, a member of the Nude Party, put the night’s playlist together with fellow band members Zach Merrill, Shaun Couture and Connor Mikita. He also served as the exhibition’s DJ. The playlist included various tracks from a vast selection of LPs supplied by the band, including Bob Dylan, War, The Velvet Underground, Van Morrison and (most appropriately), Marvin Gaye.

Senior Connor Mikita commented on the exhibition, describing the work as producing “very chill vibes all around.”

Swain and Castillo said the Looking Glass Gallery was the “perfect” location and venue for this exhibit.

“The Looking Glass provides a small, more intimate setting, which is the theme of both of our photo sets,” said Swain.

Castillo agreed, saying he couldn’t have asked for a better gallery.

“The curator [Ariel Moran] was extremely helpful in reaching our goals and setting up the reception,” he said.

Moran worked closely with the artists to make the exhibit a success, she said.

“‘Contact’ came together harmoniously because of the collaboration on presentation I had with the artist,” Moran said. “’Contact’s’ photographs could be described as sensual elegance, and Alec and Chastan’s photographs capture different types of relationships–not just romantic.”

“Contact” will be available in the Looking Glass Gallery until Oct. 8.