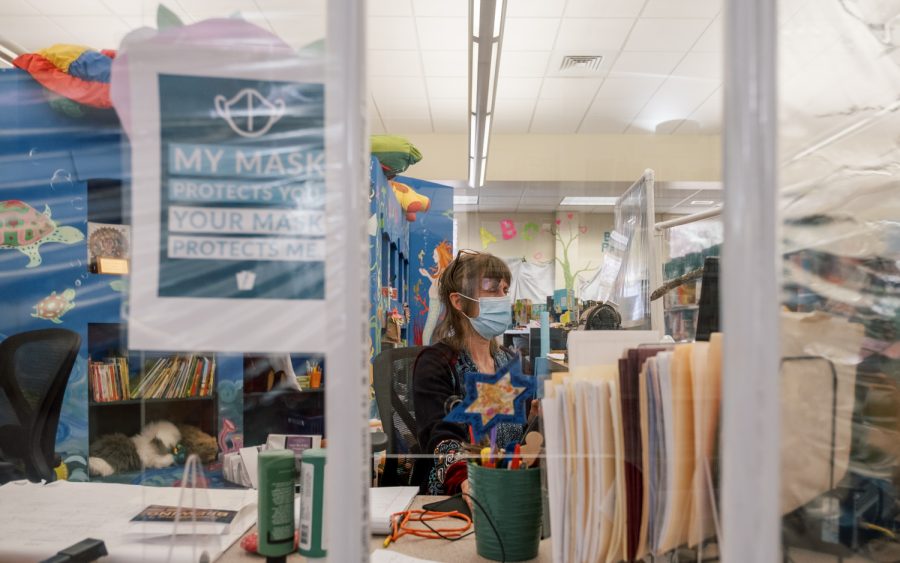 “It’s been like a little reunion”: Judith Winecoff, youth services librarian at the Watauga County Public Library, works at her desk behind plexiglass dividers to protect both employees and returning library patrons from COVID-19.

The nostalgic smell of old books wafts through the air as little kids browse book shelves with excitement.

The Watauga County Public Library is part of the Appalachian Regional Library system, which reopened nearly all its branches across Ashe, Wilkes and Watauga counties. The Western Watauga Branch Library, the only branch with a senior center, will remain closed until senior centers in North Carolina have reopened.

Caruso said the library is a hub for the community, and the library staff misses seeing people. The door count on opening day was 288 people.

“A lot of patrons are extremely happy to get back in the library,” said Randy Feimster, circulation manager. “They persevered through the curbside service and they were appreciative of that, and they’re excited to get back in.”

Feimster said opening day was busy at first, but got into “a normal rhythm.” He added that many people probably don’t know the library has reopened because he thought word has not gotten around.

Before the pandemic, Feimster said over 500 people on average visited the library per day. During summer and fall when the library was open to the public, that number dropped to about 300 people a day, which Feimster thought was still a lot of people, considering the limited capacity during COVID-19.

Feimster said the library is a resource for children’s books as well as for homeschoolers who use the library.

“It’s been like a little reunion,” said Judith Winecoff, youth services librarian. “We haven’t seen people, and the kids have grown several inches, so it’s been a lot of fun.”

Winecoff said the library is important for children because there is a community of readers and it encourages early literacy. Before COVID-19, the library offered several literacy programs such as story times and “Battle of the Books.”

At the start of the day, Winecoff said a family brought balloons and donuts for the staff because they were “happy that we’re back in the groove again.”

Homeschooler Gaia Lee came to the library on its opening day. The children’s section and the sewing section are her favorite parts of the library.

She said the library is valuable and is a great place for learning.

“I’ve lived here all my life and I’ve been going to this library since forever. Judith has always been a mentor for me,” Lee said. “I feel like it’s a wonderful resource that should be explored by lots of people.”

Community member Jenna Kissel has been a regular library visitor for three years and was also excited about the reopening because her two daughters have missed the library.

Kissel said her daughters are “voracious readers” and the library gives them great book recommendations and keeps them engaged with crafts, word searches and coloring sheets.

“In non-COVID times, this was a great place for me to come with a younger kid who wasn’t in full-time school to have a place to not be throwing markers around my house,” Kissel said.

Curbside services were still available during the library’s second shutdown. Caruso said curbside service will likely continue to be an option when the pandemic is over.

As added safety precautions, community members are required to wear masks while inside, visits are limited to 25 minutes and there is a limit to the number of people allowed in the building, according to the library’s press release March 22.

Inside the library, staff members are ensuring safety by providing hand sanitizer; closing off all seating, water fountains and study rooms; and setting up “stand here” signs spaced 6 feet apart in front of the public service desks.

All seating, water fountains and study rooms are also closed off as an added safety precaution.

During curbside service, Caruso said the library did not take any money. Print documents were given for free and late fees were waived.

Though the library suffered monetarily, Caruso said economics were not a factor in reopening.

“We didn’t really talk about that, I think that’s an underlying thing for sure,” Caruso said. “But it’s more about serving the community. That’s what we’re here for.”