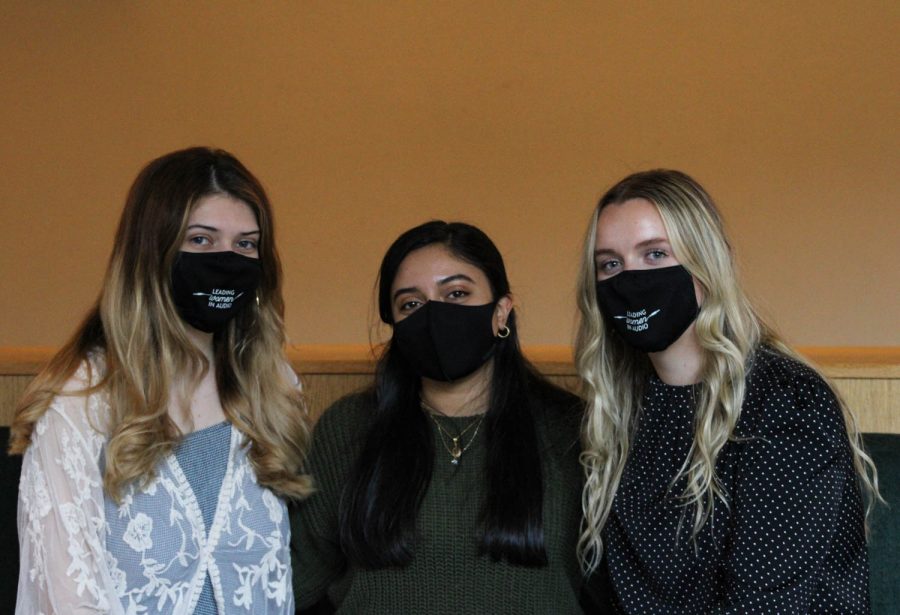 Grayson Oxendine-Parr (Left), Jasmine Hunjan (Middle), Anna Ezzell (Right). The three women are a part of The Femgineers, a group that provides a judgment-free space for femme individuals involved in music production and recording at App State.

As the first female studio manager at App State, one student is looking toward other women for support in the male-dominated field of music production.

Sofie Pedersen, a senior in the recording and production program at App State, got her start playing gigs at bars and local venues in Charlotte when she was just 15 years old. Since then, Pedersen has been in love with songwriting and producing and has put out a large collection of music ranging from singles to EPs to albums.

“There is that preconceived notion that the girls aren’t really wanting to do the techy side of stuff, they’re more like singer-songwriters, or they want to focus on choral education,” Pedersen said. “I think that that mindset is changing a little bit.”

Pedersen works at another studio in Boone and said people have told her they want a “real engineer” and have distrusted her because she’s “just a girl,” even calling her derogatory nicknames. She said she has also had to call the police on people, kicking out those who reached out to her in the first place.

“It really knocks you down a peg,” Pedersen said. “But it’s also humbling to know that they had to reach out to pay me, and I’m kicking them (out).”

Only 5% of music producers in the U.S. identify as female.

Pedersen is a part of the Femgineers, a group of femme individuals involved in music production and recording at App State. The Femgineers provide a safe space for femme producers and artists where they can talk about how they’re feeling and share mixes with each other, Pedersen said.

When it came time for Jasmine Hunjan to decide on a major, she hesitantly decided on the recording and production program. Luckily, she found a perfect fit in the program and the Femgineers as well.

“I loved the fact that here I could have the ability to explore the recording and production side more,” Hunjan said.

Hunjan didn’t come into the program with lots of background knowledge, and it was intimidating at first, she said.

“My freshman and sophomore year, a lot of my time was devoted to remembering that I was allowed to be in this space,” Hunjan said. “Just because I was different from other people doesn’t mean that I don’t belong.”

President of the Femgineers, Anna Ezzell, is continuing the organization’s history of supporting femme producers in a new way. When Ezzell took over this year, she started holding meetings weekly, having guest speakers and created a social media presence for the group.

“You’re always around people who are creating music,” Ezzell said. “I think it always inspires me to create more.”

Natalie Capes hasn’t had the typical freshman year experience due to COVID-19. But despite limited studio space and online classes, Capes has found a group where she fits right in.

“Already, I’ve found a community of other people that are interested in doing the same things that I’m doing,” Capes said. “Which was very different from me just sitting in my bedroom writing songs.”

Capes joined the Femgineers last semester after the president of the organization reached out to her.

“Not only has it been a super great way to meet people and get support,” Capes said. “It’s definitely encouraging, especially as somebody who wants to go into a male-dominated field.”

Grayson Oxendine-Parr has known she wanted to get into music ever since watching a documentary about The Rolling Stones in high school. After arriving in Boone, Oxendine-Parr fell in love with the music scene.

“I think what was the coolest part about the whole thing was going to class with these people, and then at night, going to see them play in a packed house,” Oxendine-Parr said.

Oxendine-Parr is the lead engineer for Live at R.F.G., a music discovery platform that holds sessions with Boone artists.

“When I was a freshman, I was one of four women, and we only had two upperclassmen women, and there’s probably about 60 people in the recording program,” Oxendine-Parr said.

Currently, there are a small number of women in the program, Oxendine-Parr said. The Femgineers provide a time and space for judgment-free and comfortable conversation among the women of the program.

“I think a lot of people in the program misinterpret it as we’re here to bash on men,” Oxendine-Parr said. “It’s not that at all. It’s just a place where we can be 100% authentic.”

The Femgineers is a tight-knit community, and many of the women are close friends, often collaborating on songs and working on music together.

“I can just send my work to Grayson, or Jasmine, or Sofie, or anybody in the Femgineers. They know how I’m going about it,” Ezzell said. “I know they’ll give me some really good feedback.”

Pedersen has turned to different podcasts and the Femgineers for support while breaking into the industry. For femme individuals wanting to get started in music production, Pedersen advises to “never let a man tell you what you can and can’t do.”

“It’s all about how confident you are in yourself, and how you can help other people while also simultaneously helping yourself,” Pedersen said. “I think that really making good connections with people is how you can really succeed in any arts industry.”

CORRECTION: A previous version of this story incorrectly stated that Oxendine-Parr is the lead engineer at Robert F. Gilley Recording Studio. The error has been corrected.