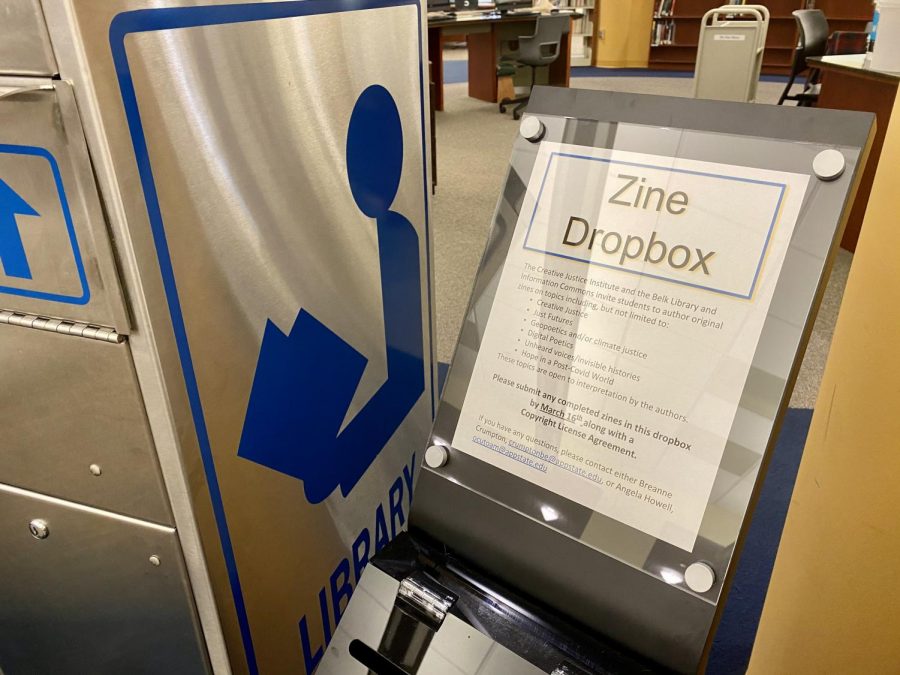 The dropbox for zines in Belk Library beside the service desk. Students have until March 16 to complete a zine and turn it into the dropbox before the library puts them on display.

In July, The Creative Justice Institute, an organization that focuses on combating racism, sexism and homophobia among the campus community, was founded. In a recent collaboration with the Belk Library, students are encouraged to create their own “zines,” a type of magazine usually discussing topics related to social justice.

Topics include creative justice, just futures, geopoetics, climate justice, digital poetics, unheard voices/invisible histories, and hope in a post-Covid world. These topics are up to student interpretation, giving them room to create something unique, according to founder Cara Hagan, an associate professor and the College of Fine and Applied Arts Dean’s Fellow for Diversity and Inclusion.

“We wanted to harness the creative undercurrent of this campus. We are a college of doers,” Hagan said. “That notion is what led to us founding the Creative Justice Institute and also coming up with the idea for this project.”

With the death of George Floyd in May came a rise in the Black Lives Matter movement. At the same time, discussions about the impacts of climate change also increased. Hagan said these movements and the 2020 election helped her decide which topics to include as the most relevant today.

“I think that given the socio-political climate that we’ve experienced over the past couple years … people are constantly thinking about what the future of our planet is going to look like,” Hagan said. “Whether it be economically, socially or environmentally.”

The zines submitted will be available to the public through a digital exhibition starting on April 4. Afterward, the library will move them to the Special Collections Research Center on the fourth floor of Belk Library.

“Having those zines in Special Collections means that future students are going to be able to see what students were thinking about, creating art about and what was truly important to them in 2021,” Hagan said.

Some professors have also turned the zines into a group project. Scott Ludwig, a professor of studio art, gave such an assignment to his printmaking studio class.

“The fact that the zines are going to be preserved in the Special Collections Center almost puts a time stamp on where humanity is at right now,” said Alexander Pillow, who serves as the teaching assistant for Ludwig’s class. “It’s important that people down the line will be able to look back at these zines and see the wide range of issues we’re facing today.”

“I think a lot of times people aren’t invested in specific issues because they think it doesn’t affect them personally,” Pillow said. “I think this assignment helps us realize that these issues not only affect the people around us, but they have an impact on us as well.”

The deadline to submit a zine is March 16, and they will be put on display starting April 4.