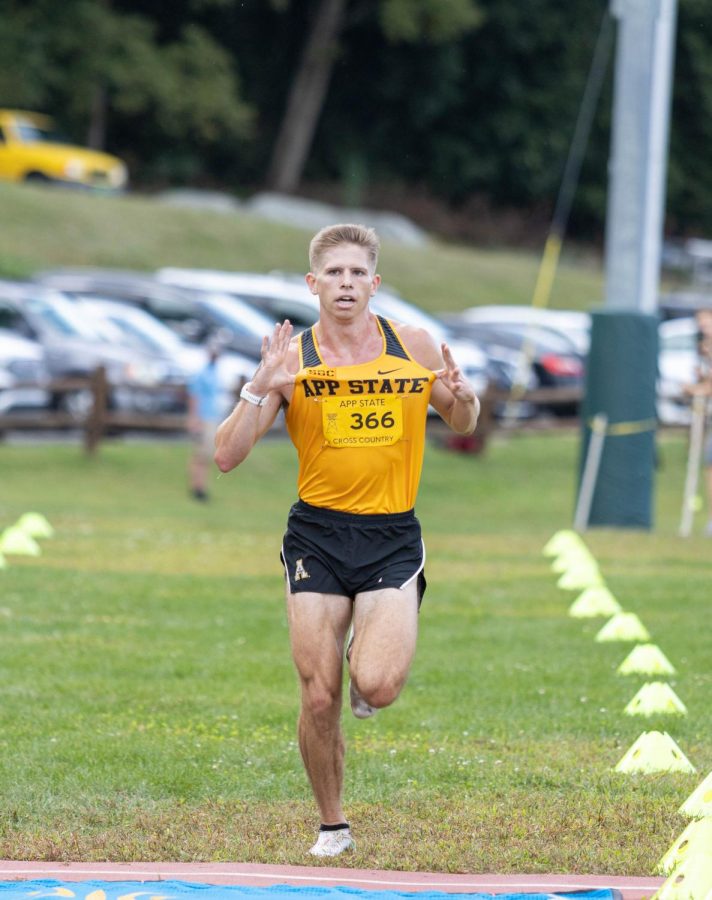 Graduate student Daniel Smith sprints across the finish line first at the Sept. 17 Firetower Project in Boone. Smith joined App State as a transfer after beginning his career running for the University of Tennessee at Martin.

Daniel Smith, a graduate student, is just entering his first season as a Mountaineer but has already garnered a Sun Belt Men’s Cross-Country Runner of the Week award and is settling in in Boone.

“This is a place where I can come in and feel at home, and the team definitely helped out with that a lot,” Smith said.

Since Smith transferred to App State from the University of Tennessee at Martin, he quickly made an impact on the Mountaineer cross-country program. In addition to being named a Sun Belt Men’s Cross-Country Runner of the Week, he also finished seventh overall during the season opener and first during the Firetower Project. Smith hopes to continue his hot start towards the Sun Belt Championships.

“I hope to place top 10 at the conference meet or hopefully top 5 even. I think that will help out the team,” Smith Said.

Smith is not the only Mountaineer runner to start out the season well. The Cross Country team finished second in the season opener and first in the Firetower Project. This success has caused Smith to feel optimistic about how well the team can perform this season.

“Practice is showing that we could all be the runner of the week,” Smith said. “I am just waiting to see how this season turns out, and I am thinking that some other guys are really going to step up to the plate and surprise some people.”

Last season, App State finished second at the Sun Belt Championships. Because the team finished in the top 2 in the first two races of the season, Smith feels this year’s team can go all the way.

Smith is no stranger to leading his teams to championships. Dating back to his time at Oakland High School, he led the Patriots to a 2016 4-AAA Region Championship. Smith was named to the Daily News Journal all-area cross-country first team from 2014-16 and was named to the all-state team in 2017. With these accomplishments, Smith said he wanted to transfer to a program that could help him achieve more.

“I was kind of looking at programs where I could run and that were in a competitive conference or were competitive within their conference,” Smith said. “I also looked at University of Tennessee in Chattanooga, and just comparing the teams, it was a clear decision that this was gonna be the best place for me to be.”

Smith said he feels comfortable at App State due to it having things he enjoys doing such as climbing, hiking, and kayaking. He also is a big fan of how passionate the Mountaineer fanbase is.

“I just love the environment here. Especially when I step out there on the course wearing that uniform. I feel like I got superpowers with all these people cheering me on,” Smith said.

Smith and the Mountaineers will continue their quest for a conference title Oct. 15 at the High Point Vert Cross.