Darrynton Evans: From small town kid to star running back 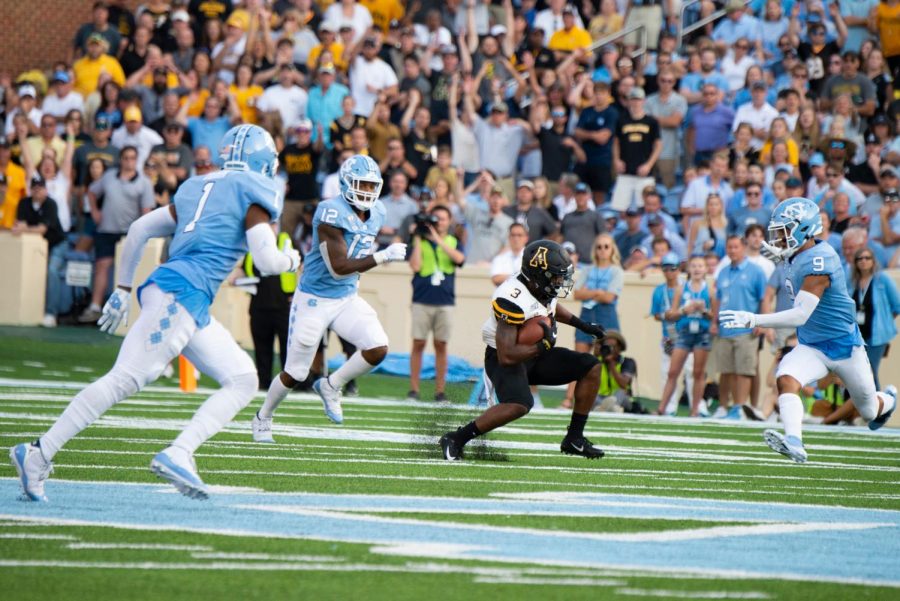 Junior RB Darrynton Evans makes a cut during the 34-31 win over UNC in Chapel Hill Sept. 21.

Darrynton Evans is a name all App State football fans have come to know and love since the running back’s 2016 arrival in Boone.

“He provides a spark; he’s a great player and a great leader at the same time,” junior center Noah Hannon said. “I think that his hard work and everything he does off the field is what you see on the field. We’re happy to have him; he’s a big part of our offense.”

The redshirt junior hails from Oak Hill, Florida, a town of just over 2,000 residents situated about 100 miles south of Jacksonville.

“It’s a real small town,” Evans said. “You got one blinking light; you got a Dollar General store and one gas station. That’s really it.”

For Evans, a lot of the town is family.

“I’m related to basically the whole city,” Evans said. “Everywhere around where I stayed was family — cousins, uncles, aunts, grandparents on both sides were in the small town. It’s a real close-knit city.”

Besides family, Oak Hill had another key component for Evans: football. Evans said he began playing organized football around age 7, but he was around the sport well before that.

“I used to always go to my older brother’s (practices),” Evans said. “He’s seven years older than me. I used to be out there running around the field getting in trouble when I really wasn’t supposed to be on the field.”

Even with so many important parts of his life in and around Oak Hill, Evans was prepared and ready when it was time for him to leave to play college football nearly 600 miles away in the mountains of North Carolina.

“With me being the youngest of four, I (saw) everybody else go off to college, so I kind of already expected it when it was my turn,” Evans said.

Being the youngest gave Evans the chance to see many of his family members also go off and play football at the next level.

“Just seeing a lot of family members coming from my small town of Oak Hill go play college football, I knew at some point I could do it,” Evans said. “I really just looked up to them and followed everything they did.”

Some of the family members Evans mentioned were wide receiver Dallas Baker, a Super Bowl champion with the Steelers and current wide receivers coach at his alma mater Marshall University; safety D’Cota Dixon, a Wisconsin alum and current NFL rookie for the Tampa Bay Buccaneers; and defensive lineman Darious Cummings, who played for Florida State and the University of Florida.

“We most definitely take pride in where we’re from,” Evans said. “We know, more than likely, without athletics, we really wouldn’t get too much of a shot going to college and getting it paid for.”

When it came time for Evans to make his college commitment decision, App State was where he decided he would grow his football family.

“The coaching staff made it seem like family, and when I came up here, it was a good vibe,” Evans said. “I talked to the older players, and they kept it real with me and told me what to expect.”

As a true freshman, Evans served mostly as Marcus Cox’s backup, and in 2017, he redshirted due to injury. Last season, Evans began to make a name for himself.

Jalin Moore was the starting running back until he suffered a season-ending ankle injury at Arkansas State Oct. 9. Evans took over as the starter for the following eight games, going on to lead the Sun Belt with 1,187 rushing yards. He was named to the all-Sun Belt first team and was the Sun Belt Championship game MVP. Evans finished last season as No. 3 in the nation with six runs of at least 50 yards.

Now, Evans is the feature back for a 3-0 App State team that received 24 votes in the most recent Associated Press poll. He is one of the Mountaineers’ most exciting and important players. A naturally quiet person, Evans said he’s been working on becoming a better, more vocal leader for his teammates.

“Now, I’m really just trying to step outside of my quiet box,” Evans said. “I really don’t like to talk a lot, but I bring energy, and I lead. I try and lead, a lot more like a vocal leader than a lead-by-example kind of guy.”

Running backs coach Garrett Riley has noticed how much the other running backs and teammates respect Evans.

“I think one of the best things about Darrynton is that he’s a good teammate,” Riley said. “He’s a guy that guys respect, obviously, because of his production and what he does on the field, but he’s about as consistent as they make ‘em. He’s definitely setting a good example for the rest of our players, in our room especially, and I think they look at him that way.”

According to Hannon, Evans combines skills in a way that sets him apart from other running backs.

“I think he has very good vision: I think that’s what you look for in a really good running back,” Hannon said. “Whether they’re fast or slow, if they have good vision, they can hit the holes and make big plays. You pair his vision with his speed and athletic ability and I think that’s what makes him a great back.”

Evans also excels at decision making, something he has shown on long kickoff returns and rushes time and time again. Evans holds the program record for most kickoffs returned for touchdowns with three.

“He’s a guy that knows when to pull the trigger; he knows when to be decisive and stick his toe on the ground and hit it,” Riley said. “Skillset wise, obviously, he’s very fast; he’s elusive; he’s stronger than people think; he can run through arm tackles. Obviously, that’s what we want in our room, for sure.”

Evans has been a focal point in the App State offense through the first three games. If his start is any indication, he’s set for a monstrous 2019 campaign.