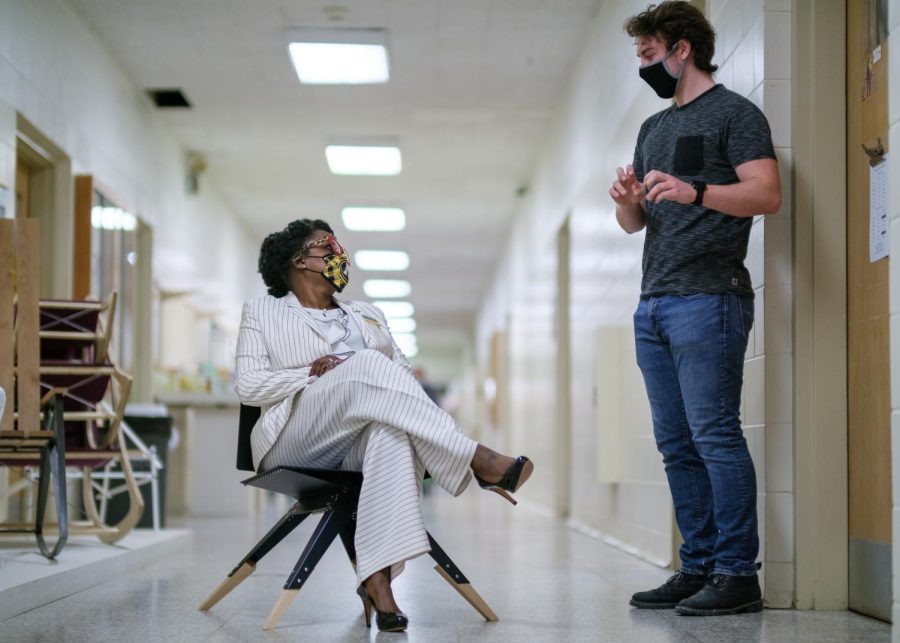 Shannon Campbell, dean of the College of Fine and Applied Arts, speaks with Dylan Timoney in Katherine Harper Hall Feb. 2, 2022.

Dean of Fine and Applied Arts Shannon Campbell discussed her role at the university, power structures in media, authenticity and inclusivity at a fireside chat Tuesday in Plemmons Student Union.

The event, hosted by the Department of Communication, was the first of the Diversity Speaker Series and is designed to enrich the university “by inviting speakers whose presentations address issues of cultural, political and social importance with particular attention paid to matters of diversity, equity and inclusion,” said Kathryn Montalbano, assistant professor in the Department of Communication.

As a first generation college student, Campbell said she empathizes with students in similar situations and will advocate for them.

Campbell said she advocated for first generation students in an administrative meeting when someone brought up the idea of implementing a policy requiring incoming freshmen to declare their major right away. Campbell said as a first generation college student, she hadn’t  heard of most majors offered in college and was able to stop that policy from disenfranchising already marginalized students.

As the only Black dean, Campbell said she examines race and power structures in the media, including the ways media can control narratives.

Campbell’s first job was with public relations company FleishmanHillard. She then worked for Exxon before leaving that position and pursuing her PhD.

“I have a really deep and genuine commitment to social justice and to sustainability,” Campbell said. “And working for a large multinational fossil fuel company did not sit well with my ethics.”

She said not every dean will “wear a long tutu to have a fireside chat,” as she brings her authentic self to work every day and admits her flaws.

One mistake Campbell said she made regarded racist marks displayed on a wall in Katherine Harper Hall. While she did interim work of filing a report and setting up a committee to talk about racism, she didn’t actively get up and walk over to the building to make sure the marks were removed.