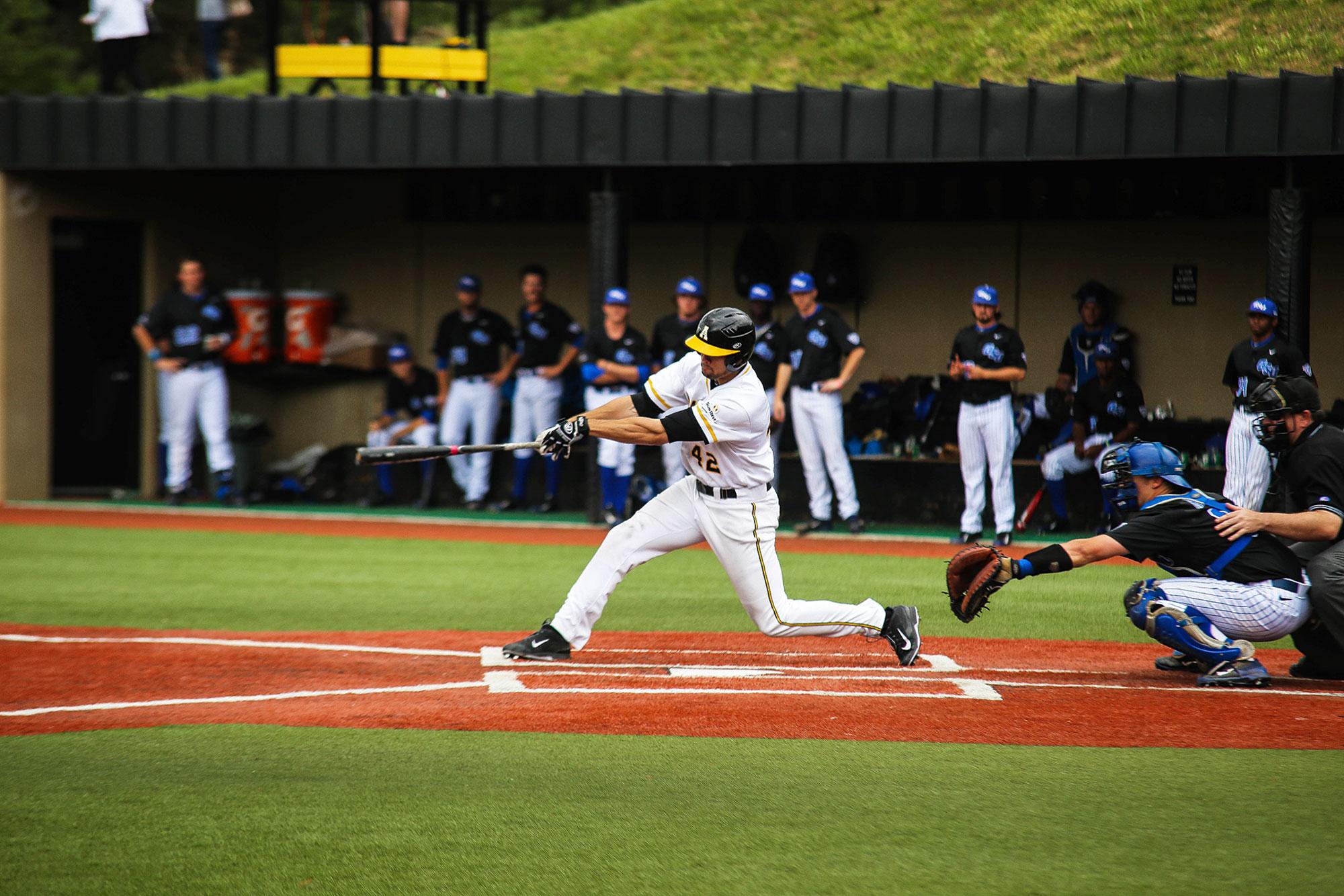 Former infielder Dillon Dobson follows through on a double against Georgia State last season. The Mountaineers will seek to replace the production of Dobson, who was drafted by the San Francisco Giants in the 23rd round of the 2015 MLB Draft. Photo by Gerrit van Genderen | The Appalachian

With only one day remaining until the start of the upcoming season, the App State baseball team continues to get into playing shape. The team looks to improve upon a 17-36 (8-21 Sun Belt) record from last season, and a last place finish in the Sun Belt.

The Mountaineers lost 14 players from last season’s roster, meaning they will have to look for immediate impact from incoming freshmen and new transfers.

Returning for his fourth year at App State, head coach Billy Jones is confident his team has what it takes to win.

“[We have] lots of young kids, but they work hard … we are very young coming in but they are talented,” Jones said. The Mountaineers have a roster this season where more than half of the players are sophomores and only two players are seniors.

In their second year in the Sun Belt, Jones respects the competition ahead.

“It’s a tough league,” he said. “It’s a league that there are no weekends off and the travel kind of beats you up a little bit.”

Members of the team are not underestimating the strength of their schedule this year either. Senior pitcher Caleb McCann knows how tough the Sun Belt can be.

“It’s competitive. Everybody is good and everybody has a chance to win [but] it’s fun competing with that much competition,” McCann said. “You have to bring your A-game everyday.”

Sophomore catcher Chandler Seagle returns to the team this year after appearing in 44 games last season and starting 37. After a year of learning the ropes, he feels he is more prepared this year than last season.

“The experience from last year is definitely going to help me out this year,” Seagle said. “I feel like I’ve grown a lot, not only baseball-wise but as a person. Getting that experience and all the reps I was able to get this fall I think are really going to help and pay off this year.”

Junior outfielder and pitcher Brian Bauk also spoke about preparation and his role on the team this year.

“It’s tough being a two-way guy but you just have to pull through sometimes,” Bauk said. “We’re young but that’s not to say we’re not talented. We’ve got some good players down there and everyone is working real hard.”

Several strong competitors from the 2015 season return this year to compete once again for the Sun Belt title. UL-Lafayette seeks to defend their Sun Belt tournament title, and have been selected as the 2016 conference favorite by a preseason Sun Belt coaches poll. The Cajuns will return five positional starters from last season, including one 2015 first-team All-Sun Belt selection and the 2015 Freshman of the Year.

South Alabama also looks to be a formidable foe, returning the 2015 Pitcher of the Year and 2016 Preseason All-Sun Belt selection Kevin Hill and 2015 Rawlings Division I Gold Glove recipient, center fielder Cole Billingsley. Billingsley was also selected as the 2016 Preseason Student-Athlete of the Year for the Sun Belt conference.

The Mountaineers will put a young team on the field this year but one with great potential. With vicious competition that is older and more experienced, the key to success will be developing good team chemistry and being able to stay mentally tough throughout an entire season.

App State will open their spring season on Feb. 19 against the Coastal Carolina Chanticleers in the Caravelle Resort Tournament.