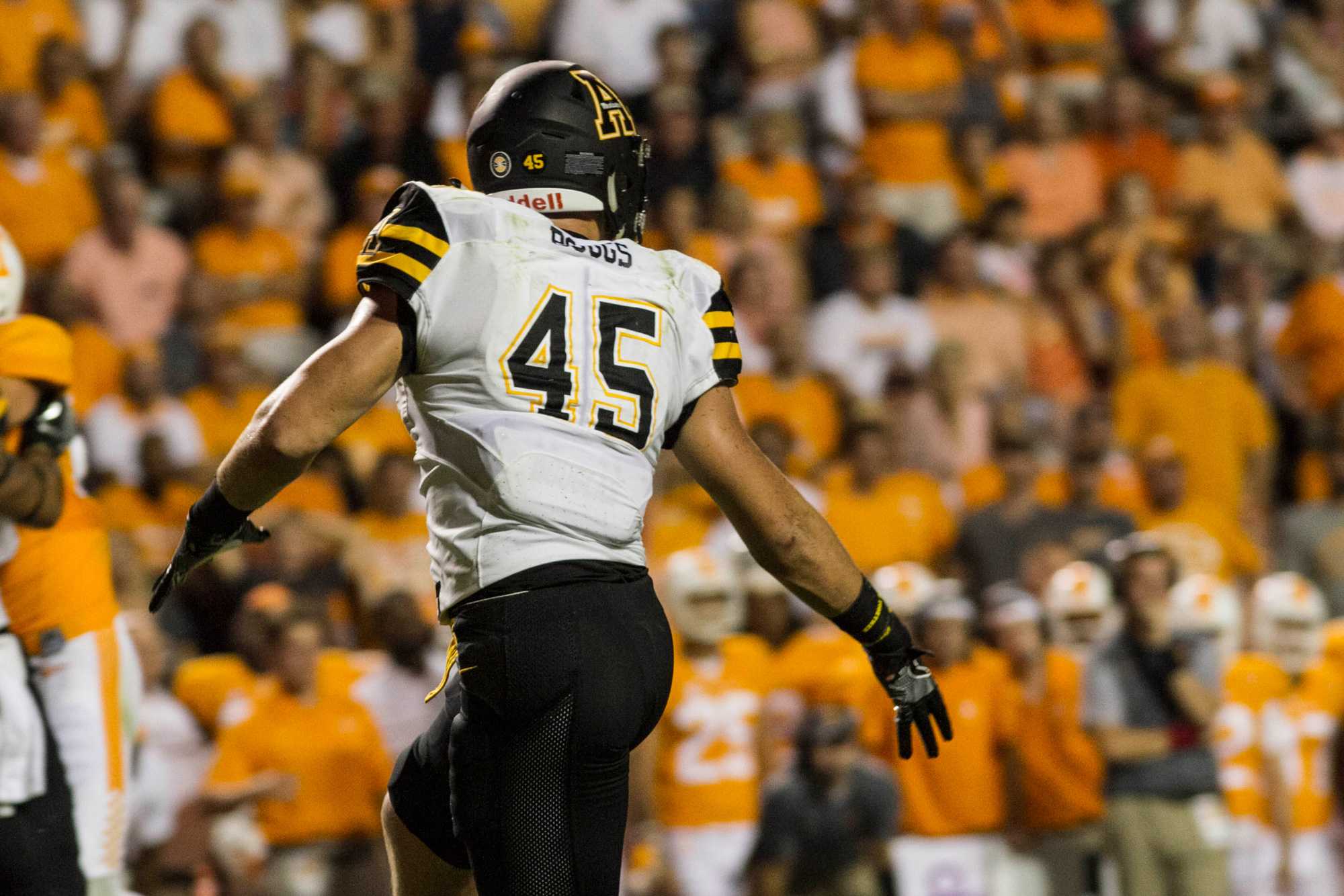 Junior Inside Linebacker, Eric Boggs, looks back towards his teammates during the game against Tennesse in 2016. The Mountaineers lost the away game in overtime with the final score being 20-13.

Spring practices wrapped last week for the back-to-back Camellia Bowl Champs, and the defense is starting to put together another stellar unit for the 2017-18 season.

Trying to fill in the vacancies for linebackers John Law and Kennan Gilchrist, speed is already becoming a very noticeable factor.

Junior outside linebacker Devan Stringer is continuing to step into his role as a top performer and leader on the defense, and said that this is one of the best springs he has ever been a part of in his time as a Mountaineer.

“The defense looks very fast and we have a chance to be even faster this year than we were last year, so that’s always good,” Stringer said. “I do like that we’ve got a bunch of guys getting a lot of reps, moving fast and not really second guessing themselves so it means they’re comfortable.”

Stringer has played a vital role as part of this defensive unit having only missed a handful of games since his freshman year and proving to be one of the more passionate players on this Mountaineer squad.

Leading the charge for the defense and always a force to be reckoned with is soon-to-be senior inside linebacker Eric Boggs.

Teamed up with now former inside linebacker John Law, the two made up one of the nation’s top inside linebacking forces clogging up the run game and dropping back to manage a handful of interceptions on the season. The two combined for over 150 tackles with Boggs leading the team and making up for just short of 100.

“Boggs is and has been a great leader for us and now he’s a little bit more vocal being a senior, it’s his job,” inside linebacker coach Dale Jones said. “The biggest thing is that all of our players look up to him and he does a great job. He doesn’t take a day off, he just does all the things that an outstanding leader does on and off the field.”

With that being said, now that Law is gone, Boggs is looking for a new right-hand man to step up and be that missing link.

“Losing John Law and Gilchrist, it’s definitely a loss but in the same token we’ve got other guys to play the game and now it’s their time to step up,” Jones said.

The defensive depth that the black and gold have had the past few seasons is certainly paying off this spring in helping expedite that search process. Jones said that they’ve been able to get guys playing time and, although less experienced, they know what they’re doing out on the field.

Players like sophomore Edward Davis, redshirt freshman Jordan Fehr and senior Rashaad Townes are sure to get more playing time this year as they have been extremely patient and hardworking throughout last season and this offseason so far. Townes specifically is eager to get back to action in his senior year as his past few seasons have been dominated by a list of injuries.

One player in particular that seems to be edging his way into that vacancy is sophomore Anthony Flory. Flory got into the action a little last season playing in 10 of the 13 games and sticking his big body and shoulder pads in whenever he got the opportunity. Flory will be a junior next season.

“Flory has done a great job at stepping up and, kind of like Boggs was, he’s starting to be a leader and now it’s his turn and I think he’s accepting that role,” Jones said.

After taking Tennessee to overtime and claiming a share at their first Sun Belt Conference Championship, the two hope to make a just as big, or even bigger, impact leading the defense this season.

“I think the biggest thing is just making sure we understand fits in our defense, the linebacker makes a lot of adjustments,” Jones said. “It’s a challenge but once you get it you get it.”

Both Stringer and Boggs agreed that they don’t necessarily feel any pressure in the offseason so far.  Boggs said he knows the defense inside and out and it’s all about being “ready to compete and ready to play” when the time comes.

“As a team our expectations are higher than they’ve ever been, we’ve got a lot of guys coming back and a lot of talent filling in for the guys we did lose,” Boggs said. “We’ve got to rally around and play hard.”