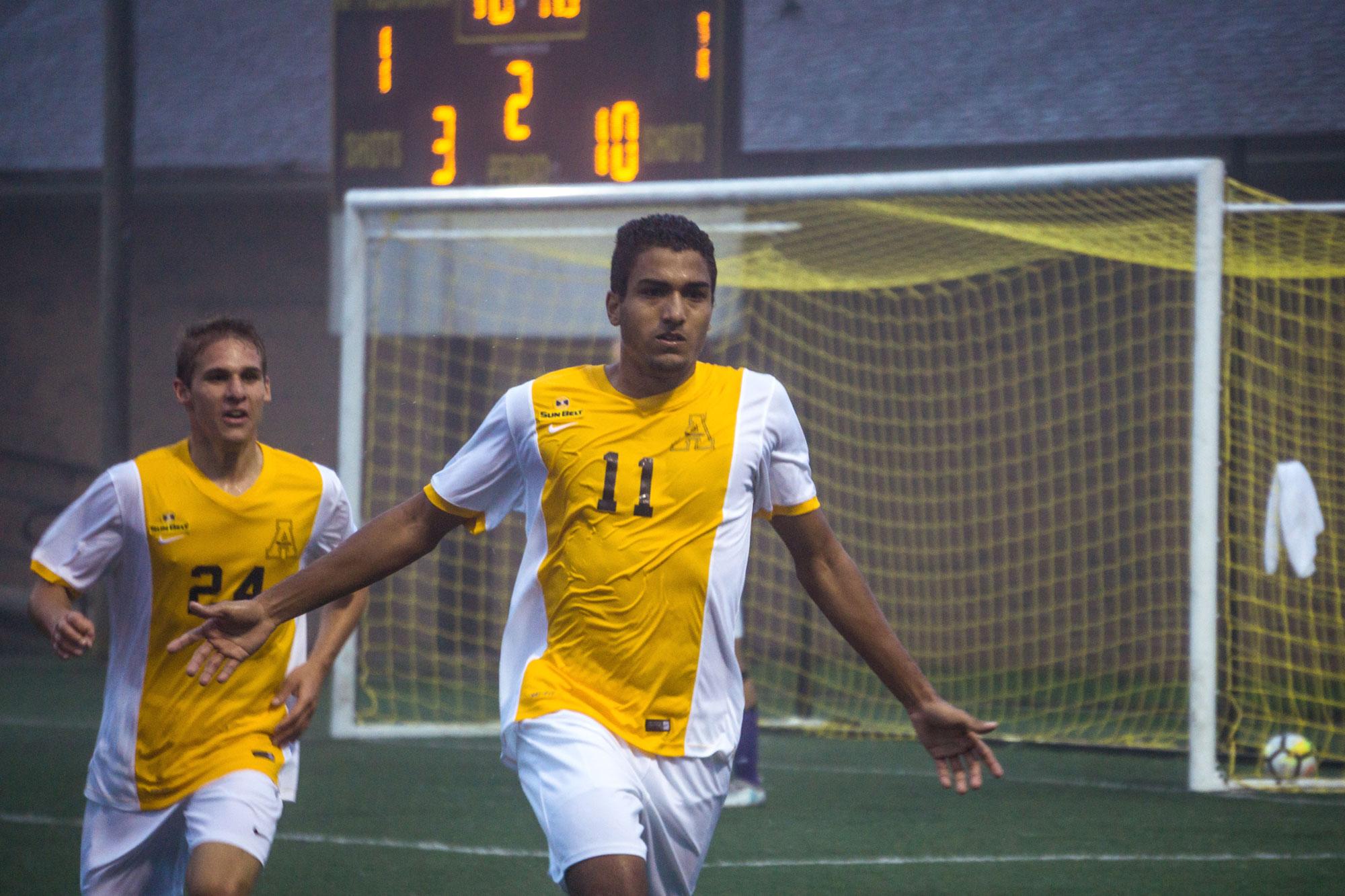 Juan Hernandez celebrates just moments after kicking his second goal of the night. As a freshman, Hernandez clearly established himself as a valuable asset to the team during his first home game against UCA.

Game One vs. Central Arkansas on September 1 at 5 p.m.

The App State men’s soccer team opened their first home game of the season with a 2-1 victory over Central Arkansas (0-3) on Friday night, achieving the win through extreme adversity.

App State is welcomed home in a hazy fog. After defeating VCU in Virginia the Sunday prior, the Mountaineers are ready to carry this momentum into their first home game of the season.

The game began with equally matched aggression on both sides, before senior John Walrath was subbed out of the game due to an injury early on. App State was packed with an overwhelming amount of new faces on the field, but that did not concern head coach Jason O’Keefe.

“We say all the time that it doesn’t matter whether you are from Germany or from North Carolina, whether you’re a freshman or you’re a senior, the guys that are producing the winning plays are gonna play,” O’Keefe said.

An impromptu injury by the Bears allowed the App State offense to re-adjust and come out with a more aggressive angle. Freshman forward Reed Hunnicutt was able to make his way down the field, assisting his teammates, but none were able to capitalize on available shots until Hernandez is able to enter the box.

“Juan did a lot of things that I was looking for him to do,” O’Keefe said. “Holding up the ball, be technical, look for combination play, get in the box and score goals. He is coming from a highly talented youth academy in Orlando City and we knew he would be able to contribute right away and so we are pleased for him.”

Once the goal was scored for the Mountaineers, an intense fog rolled over the field forcing the team to step up their communication. Coming onto the field, App knew that the weather would play a large role in Friday’s match.

“I mean, sometimes we couldn’t see the ball very well,” Hernandez said. “We kept playing and told each other that communication was a very big factor during this game. Sometimes you didn’t know where your player was and you just had to talk it out amongst each other.”

Closing out the first half, the Mountaineers held a 1-0 advantage. Going into the second, App did not plan on dropping this lead; aggressive defense was shown by senior defense Jeremey Tsongo, who changed the pace of the game with a sliding tackle.

The Bears were able to score off a free kick, which caused frustration within the home side of the field. Tying up the game 1-1, Hernandez was able to score again by slow dribbling into the box and sliding the ball past the goaltender.

“I cannot really put it into words. I was excited, very excited,” Hernandez said. “The first one was good, but the second one was icing on the cake.”

After Hernandez’s second goal of the game, the Mountaineers held off the Bear’s offense and put a win in the books for the first home game of the season.

“I think everything we do has a level of togetherness, communication and helping one another out,” O’Keefe said. “If somebody steps out of line, you fill their space. If somebody makes a bad play, you’re there to get their back.”

Game Two vs. Long Island University on September 3 at 1 p.m.

The Mountaineers (2-1-1) entered the match off of a 2-1 home win against Central Arkansas two days beforehand. LIU (0-2-1) had not won or drawn a game since the beginning of their season.

App State took an early lead in the eighth minute when freshman midfielder Marc Pfrogner made his way into the box and was brought down, allowing junior defender Ian Bennett to convert from the spot with a calm penalty, scoring his first goal of the season. Junior midfielder Daniel Avila nearly doubled the Apps’ lead when he curled an effort from just outside of the area and clipped the top of the crossbar.

Both teams continued to battle back and forth throughout the first half. On the 73-minute mark, LIU junior midfielder Alan Hansen turned brilliantly and cut the ball back for senior midfielder Naeem Charles to rifle home the equalizer for the Blackbirds.

Tempers flared in the second half as LIU players went into dangerous tackles and picked up six yellow cards throughout the match.

Following the equalizing goal, both teams were pushing for the vital second goal. Freshman forward Juan Hernandez, the two-goal hero against Radford, came closest to netting the winning goal when his strike came off the inside of the right post.

With only a few seconds remaining in regulation time, the Blackbirds almost scored a heartbreaking winner against the Mountaineers when sophomore Zach Peterson’s header looped towards the top corner, but luckily, junior goalkeeper Jake Chasteen was alert to the danger and tipped the effort over the crossbar.

The two teams headed into extra time looking gain an important win, however neither of them could conjure up a winning goal. Both defenses frustrated each other and neither team could manage a shot on target.

LIU was ranked third nationally last season with an average of 2.17 goals scored per game. They looked to attack with menace and pace every time they broke forward. Long diagonal balls seemed to be the key in their attempt to unlock the Appalachian defense.

“The big switches were difficult to deal with,” Bennett said. “We were trying to block them in and they’d swing it across and we’d all have to recover and that takes its toll after 110 minutes.”

The Mountaineers are back in action against East Tennessee State at home on Sept. 7.