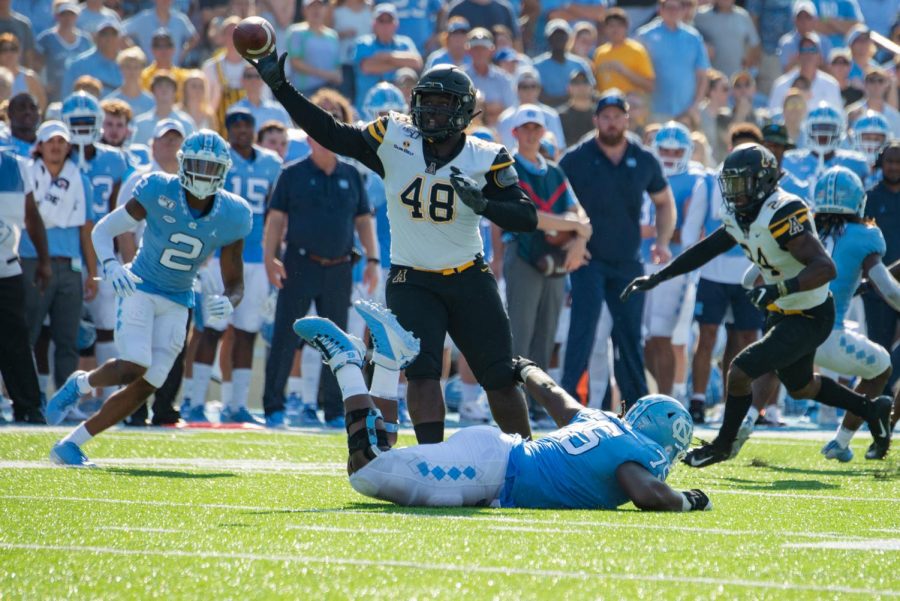 After stripping UNC’s quarterback, junior defensive lineman Demetrius Taylor scooped up the ball and ran 20 yards into the Carolina blue end zone to score his first career touchdown. As shocked Tar Heel fans looked on, he put a finger up to his mouth to silence the crowd. Taylor had a dominant performance in Chapel Hill, totaling 2.5 sacks, two forced fumbles, a fumble recovery for a touchdown and an interception.

On May 27, 1999, Taylor was born in Florida. There, his mother, Yolanda Whitehead, raised him and his brother, Tremaine. Taylor considers his mother’s work ethic and sacrifices his main inspiration to excel in everything he does.

“She raised me and my brother by herself, so watching her struggle influenced me to be better in school, sports and anything I did,” Taylor said. “I hope to pay her back for everything she did for me one day.”

While Taylor had no father in his life, he did have a father figure; his grandfather.

“We used to fix cars together, stuff like that. He’d always teach me life lessons about everything. We’d sit down and talk for hours, just talking about life,” Taylor said.

Taylor said he endured tough times during his childhood, but appreciates everything those experiences taught him.

It wasn’t until he was 9-years old that Taylor started playing football. However, Taylor only played three games during his first season because of his weight. It wasn’t until his coach brought him back the next season that football would begin to take off for Taylor.

“I grew to love the game, and every year since then, I’ve been getting better and better,” Taylor said.

Taylor received All-Dade County and All-State honors as a senior, but only received a two out of five star rating from major sources like 247Sports and Scout.com.

“It’s really been a tough road because I really didn’t get any offers until my senior year,” Taylor said. “App gave me an offer in late May, and stuck with me ever since.”

Taylor was drawn to App State not only for the football and education, but because he wanted a change of setting. He had never left Florida until his official visit to Boone on Oct. 1, 2016. He committed to play football at App State the next day.

“It was just totally different from what I was used to,” Taylor said.

In Taylor’s first two years as a Mountaineer, he received less in-game opportunities than he had hoped, amassing 29 total tackles. He spent much of his time on the sidelines as a backup to more experienced players.

“It’s been a rough two years for me being behind a couple of guys that had more experience because I felt like I was ready to play the role I’m playing now,” Taylor said.

Despite a slow start to his college career, Taylor has burst onto the scene as a junior. He accumulated as many sacks as he had all of last season through the first four games and is second in the nation in forced fumbles with three. Taylor is also tenth in the country in tackles for loss with 6.5 and fifteenth in sacks with four.

Stewart said he has high expectations for Taylor and expects him to step into more of a leadership role.

“I’m really looking for him to be the alpha male of this team and the D-Line. The sky’s the limit for him,” Stewart said. “He’s a guy that can really step it up big time. He’s athletic, he’s fast, he’s strong, and so I’m very excited for him.”

Taylor said finally seeing these opportunities come his way is a long-awaited payoff for all of the years of hard work he put in.

“I just want to continue to get better as my career continues here,” Taylor said.

Taylor said he hopes by the end of his time with the Mountaineers he will earn his degree and make it to the NFL.

“I just want to enjoy everything this game brings to me, all the traveling, all the practices, and hopefully make it to the next league,” Taylor said.