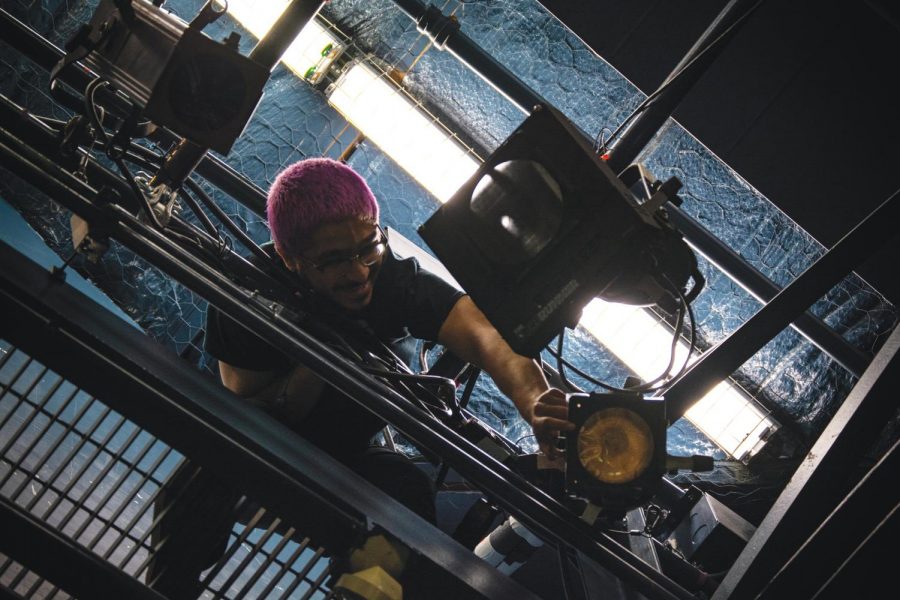 To celebrate the 25th anniversary of the Valborg Theatre, the Department of Theatre and Dance is inviting alumni back for a revival of “A Midsummer Night’s Dream” on April 10-14.

Alumni will teach master classes for theater students April 11, and on April 12 the theater department will hold panels of alumni discussing teaching, performing and writing. The department will host an alumni banquet in the Solarium on April 12 and a gala reception on April 13 at 8 p.m. that is reserved almost exclusively for alumni.

“We haven’t been great about engaging our alumni, and we thought the 25th year would be a good opportunity to try and do that,” department chair Kevin Warner said.

Warner said they expect 120 people to come to the events that weekend, and 60 have already RSVP’d.

Before the Valborg Theatre was built, faculty and students had class and performances in the Chapell Wilson Hall gymnatorium. For plays, the basketball court became a stage and the nets stayed up, according to “Angels in the Blue Ridge Mountains,” an article written by Susan Cole, former chair of the Department of Theatre and Dance. Chapell Wilson was built in 1937 by the Works Progress Administration, a New Deal agency that built public buildings and roads. Many gymnatoriums were built during the Great Depression because it was cheaper than building separate gymnasiums and auditoriums, Cole wrote.

Cole said the building was so cold in the winter that students and actors had to wear coats in class and during rehearsals. The large overhead heater made too much noise during class and performances.

“There were days that I canceled class because it was just too cold even with overcoats,” Cole said.

Cole said winter rehearsals for “Cabaret” made it nearly impossible for musicians to play their instruments because their mouth pieces were frozen. Cole designed the costumes for the show, but struggled to accomodate for the cold temperatures.

“I needed to see the people wearing their costumes on stage,” Cole said. “They would come out…they would open up their coats and say, ‘See! Am I OK?’”

While rehearsing for a musical in the summer, Cole said they had to open side doors because it was so hot. The fluctuation in air temperature caused the instruments to constantly go out of tune.

Cole said because of poor ventilation, the side roof eaves were always open. When it snowed, it would fall on the stage and in the first few rows of the auditorium. Birds and bats flew in through the eaves and created a mess. Eventually, the eaves were closed permanently.

Actors had minimal backstage area and little space for the scenery construction. Because the dressing rooms were under the stage, they could not flush the toilets during performances because the audience would hear it.

The dressing rooms were frequently flooded and invaded by water bugs and rodents. A mouse fell from the ceiling during a dress rehearsal, and another skittered across the sound board during a performance.

The department desperately needed a new theater, but money was hard to come by. Cole said a new theater was a low priority for the school. Six faculty members in the theater department gave administrators tours of the gymnatorium, pointing out all of its problems. The North Carolina General Assembly approved $1.3 million for the project in 1991, but it was not enough money to completely fund the building. Former Chancellor John Thomas went to Chapel Hill and fought for the $370,000 needed to complete the building.

The auditorium closed after the spring production of “Playboy of the Western World,” and renovation began fall 1992. Scenic and lighting designer Frank Mohler designed the space using a drawing program on the department’s first Macintosh computer.

“I didn’t worry about building codes and (Americans with Disabilities Act) regulations,” Mohler said. “I was just worrying about what would be a good theater.”

Mohler designed a flexible theater. The basic stage is 34 feet wide, but technicians can open side panels to make it 50 feet wide. The front part of the stage can be removed to create an orchestra pit. To accommodate for a lobby on the other side of Chapell Wilson, the seating and the stage was flipped. Ten rows of 334 seats wrap around the stage. The slope of the original auditorium from front to back was only 3 feet.

“No matter where you sat, you were looking at the back of someone’s head,” Mohler said.

Mohler handed off the conceptual design to Jim White, the principal architect from Calloway, Johnson and Moore, based in Winston-Salem. The architect stayed close to Mohler’s conceptual design, except for minor adjustments. While the new theater was constructed, the theater department’s productions took place in the IG Greer Studio Theatre.

The department still needed money for lighting and sound equipment, and furniture for the lobby, dressing rooms and green room.

Two sisters, Lorraine Sinkler and Valborg Sinkler Crossland, came to the rescue.  Crossland, a well-known 1940s solo actress in the Midwest, was dying, so Sinkler wanted to honor her. She consulted associate vice chancellor for planned giving Wayne Clawson about a gift in her sister’s name. Her $400,000 bequest funded computerized lighting and sound systems, about 100 additional new lighting instruments, shop equipment and a mezzanine to provide additional space at the rear of the shop.

Once construction was complete, no one was hired to install the new equipment, so Mohler, theater professor Joel Williams and student assistants worked for two weeks, installing the lighting and sound systems and building the scene shop.

The first show performed in the Valborg was “A Midsummer Night’s Dream,” in spring 1994. Cole directed the show, and both students and faculty acted in the play.

Twenty-five years later, faculty no longer need to act in “A Midsummer Night’s Dream” because the department has grown so much.

Warner said the department hopes to build more to accommodate for its growth. The department just completed a feasibility study for an addition to the Valborg that would add a studio theater, so they would not have to use IG Greer, dance studios or rehearsal studios. Warner said they do not have a set timeline for the construction because it is no approved.