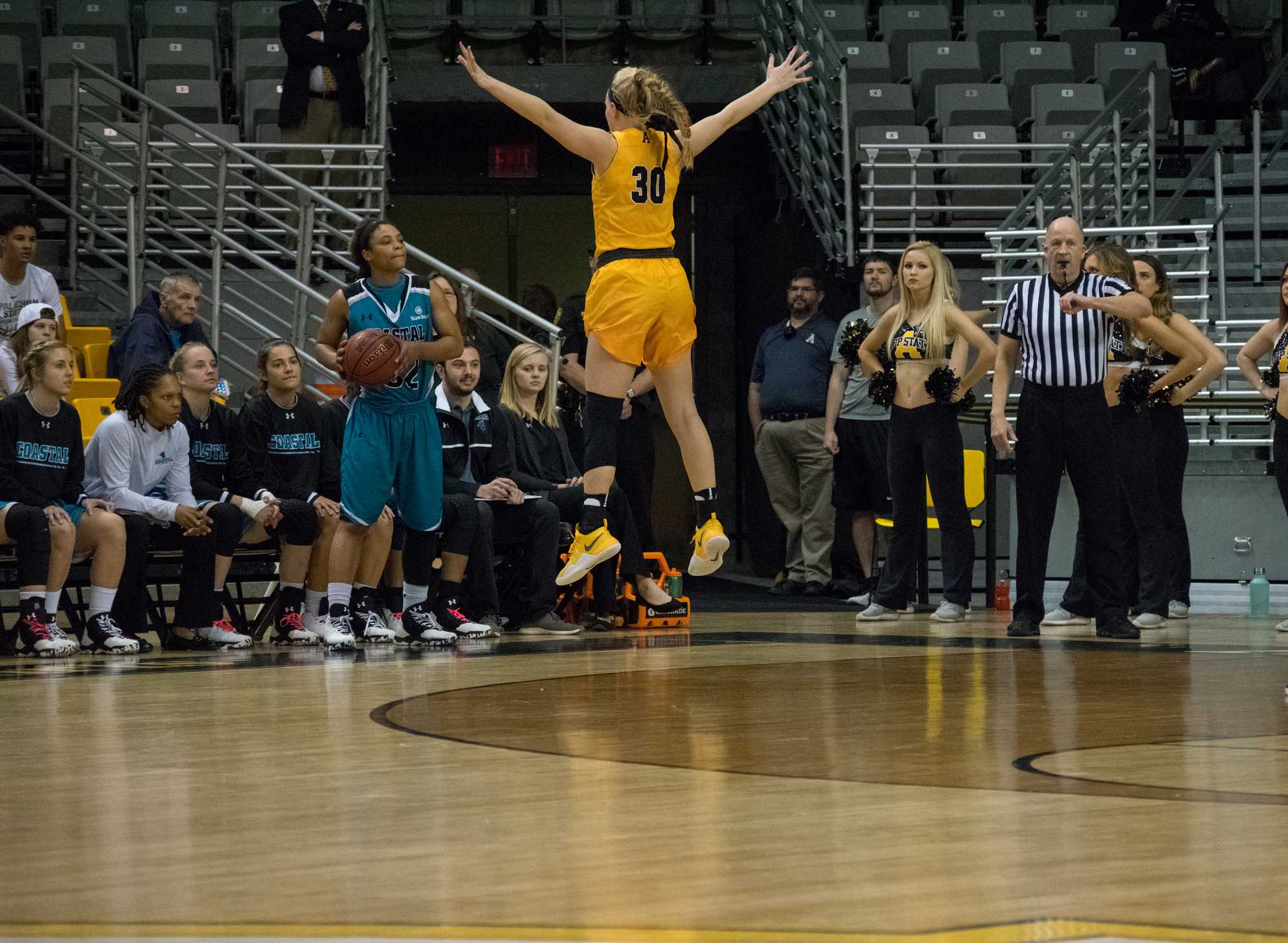 Senior Ashley Bassett-Smith scored 13 points against Costal Carolina. Ashley had a total of 5 rebounds throughout the game.

Appalachian State women’s basketball’s senior night blew a 19-point lead against Coastal Carolina on Saturday in their final regular season game before heading into the Sun Belt tournament next week.

The Mountaineers (11-18, 6-12 Sun Belt) used the emotions of senior night to jump out to a 7-0 run in the first quarter, thanks to the three senior starters Bria Carter, Ashley Bassett-Smith and Joi Jones, but after pulling ahead by 19 in the first half, the Mountaineers couldn’t hold on and fell 56-53 after a late game Chanticleers comeback.

“We wish the outcome would have been different,” Bassett-Smith said. “We definitely played hard, and we know our team gave its all for us.”

App State was able to dictate the pace of the game forcing Coastal Carolina to seven turnovers and capitalizing on them getting eleven points off turnovers, but despite leading the whole game, Coastal took their first lead of the game with 2:06 remaining in the game.

It seemed that the Mountaineers were going to put Coastal Carolina away before half time, but Coastal had a little run that gave them confidence heading into the second half.

“I didn’t like the way we ended the second quarter,” head coach Angel Elderkin said. “We gave up a 4-0 run that was really unnecessary.”

Starting off the second half, Coastal Carolina had more energy, playing a press and picking up the tempo.

The press was effective against Appalachian State, and they were not able to handle the physicality of the game, similar to the last time this season when the two teams faced off.

“They were really physical with us,” Elderkin said. “The bumping, the trapping, the talking, it really gets in our head, and we have to better than that.”

At the end of the third quarter, the Mountaineers made only one of their final nine field goals, letting Coastal Carolina back in the game.

During the fourth quarter all the momentum was with Coastal Carolina and it was evident that the Mountaineers were getting frustrated.

“We got a little frantic we started to scoreboard watch,” Carter said. “Once they put the pressure on us, it really took over and we stopped playing our style of basketball.”

Despite leading for over 37 minutes, once Coastal took the lead, late free throw misses from redshirt sophomore Q Murray, and a game tying three pointer could not be converted.

“They dictated the way the second half went,” Elderkin said. “When you allow a team to do that, you are not going to win in March.”

It was a disappointing finish for the seniors, but their impact will go much further than ending tonight.

“These seniors set the foundation of what we want the culture to be around here,” Elderkin said. “I told them before the game that their impact for this program is well beyond the jersey.”

Appalachian State will now have a chance to get revenge on Coastal Carolina after being swept by the Chanticleers in the regular season on Tuesday in the first round of the Sun Belt Tournament.

“It’s tough to beat a team three times in a season,” Bassett-Smith said. “We really think we can beat them.”