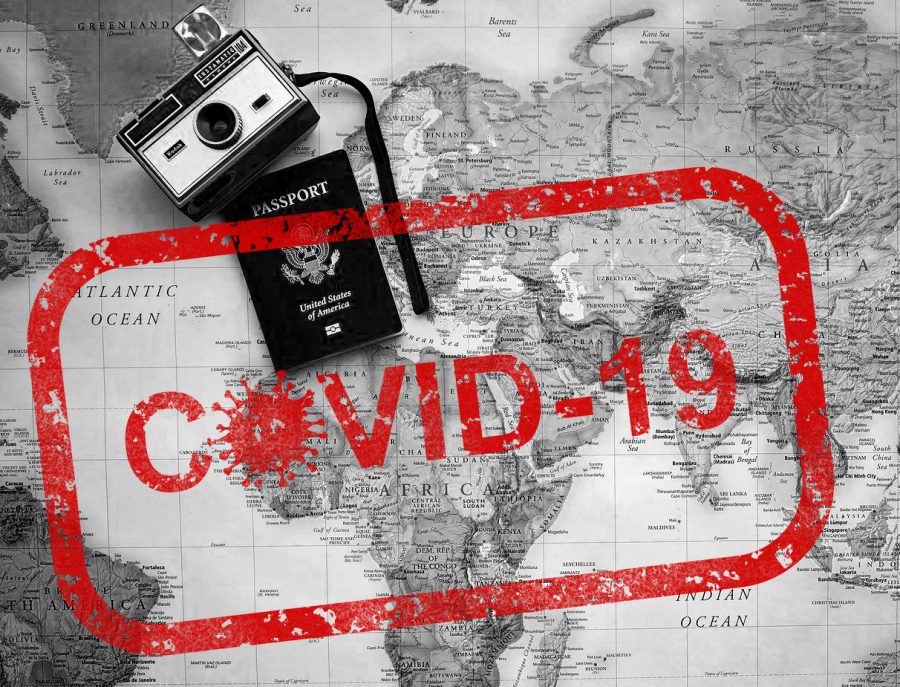 She thought she’d gotten by. She thought she escaped the crisis facing so many of her peers. But, she was enjoying her second dinner course, celebrating and mourning the last night of the Italian adventure for her classmates who hadn’t been as lucky, when she got the email.

Puffer was one of 21 App State students who studied abroad in Italy in the spring 2020 semester. All 21 were sent home in March when the novel coronavirus trickled from Asia into Europe.

The pandemic has halted thousands of U.S. students’ study-abroad experiences this year, and for the foreseeable future. According to the Institute of International Education, 22,041 U.S. students were studying abroad during the spring 2020 semester. Universities evacuated nearly 81% of those students when COVID-19 began its global spread.

App State’s Office of International Education and Development canceled all classes abroad on March 13. From Europe to Australia to Samoa, App State told nearly 120 Mountaineers to pack their belongings and get home before March 22.


“I was basically outrunning COVID”
Puffer had spent almost a month in Florence when the university told her to evacuate.

She was excited to continue her commercial photography and studio art classes at Lorenzo de Medici, a top institution for globetrotting scholars.

She’d been lucky to travel to Italy before. It felt familiar. It felt safe.

App State told her to leave just two days before LDM sent students home. Some of her classmates were called back before she got the news.

But her parents were army rats. They’d been abroad during variant Cruetzfeldt-Jakob disease, a degenerative brain disorder that emerged in the ‘90s in the United Kingdom, acquired from eating meat from cattle affected by mad cow disease. Coronavirus wasn’t going to be an issue.

Little did the Puffers know, the Lombardy region, a few hours away from Florence, would become the first area severely devastated by the virus outside of Asia.

It was time for a back-up plan. Leaving Europe wasn’t an option yet. She contacted some family friends in Germany. When App State asked for proof that she was leaving Italy, she sent OIED a picture of her boarding pass to Frankfurt.

Once word got around that App State was sending its students home, friends started reaching out to Puffer. She broadcasted what was going on in an Instagram story: “It’s fine. I’m working on it,” Puffer said. “I had a breakdown in the Frankfurt airport, and my luggage fell completely apart, but I’m not sick, and I’m working on it.”

After a week in Germany, where she thought she broke free of the virus’ grip, it was time for her to embark on a pre-planned 10-day trek across the continent. She would have eventually met up with her mom in Portugal.

The first stop was Salzburg, Austria. Puffer spent only two days there until her family decided it was best for her to come home –– the virus was beginning to cast its dark shadow across Europe, as COVID-19 infected thousands, and several had died. Coronavirus had won, and she was going home.

In just a few weeks, Puffer had evacuated from Italy, spent a week in Germany, enjoyed a couple of fleeting days in Austria, caught a connecting flight through London to New York, and finally made her way to South Carolina after landing in Charlotte.

“I don’t know what I was on or what someone put in my coffee,” Puffer said.

Puffer drove to Spartanburg to quarantine at her grandparents’ empty house before reuniting with her family in Asheville.

During her 14-day isolation, Puffer recovered from all the moving she’d been doing.

She mourned the end of her Italian semester. She felt cheated.

She spent her time there collaging, sketching, going for walks and scrapbooking her “tiny little moment abroad.”

Although ephemeral, her scrapbook-worthy memories of her Florentine experience are aplenty.

Puffer said her warmest memory was taking a Sunday morning solo visit to the Uffizi Gallery. Though tourists flock to the museum for Sandro Boticelli’s famous “Birth of Venus,” Puffer remembers being awestruck by his painting “Primavera.”

She remembers her walks through Florence. She would round the corner from her townhouse and see the “Piazza della Repubblic” and the “Duomo de Firenze.”

She remembers Italian coffee and how she drank at least one espresso a day, which was worth the couple of Euros.

She remembers the fresh markets and a vegetable vendor named Rita, who was patient as Puffer asked, “How are you?” in Italian.

She remembers using her talent in her fashion photography class.

Today, Puffer is back in Boone, taking classes at App State. She works at Earth Fare. She’s re-taking her fashion photography class because she feels like she didn’t learn all she could after LDM’s classes went online. There was a seven-hour time difference. There was no online learning portal. It was hard to keep up.

Puffer said she learned a lot about herself during her Florentine semester, despite its premature ending.

She has “lofty dreams” to be a traveling photographer and shoot for Vogue or Vanity Fair one day. She said those dreams don’t feel so lofty anymore.
“There’s no delicious food you can taste”
This year would have been their fifth faculty-led trip to China. It was canceled before it even began.

App State professors Shanshan Lou and Jiangxue Han are both from China. They grew up in Hangzhou and Beijing, respectively, and know all of their cities’ “hidden gems.”

When the virus broke out in China, they got news that they wouldn’t be traveling. They had a back-up plan. They would change the trip’s destinations to South Korea, Japan and Taiwan.

Universities across the U.S. have transitioned into virtual learning and hybrid models of in-person and distance learning, and App State is no different. Only 20% of the university’s classes this semester are in person.

Instead of a 21-day visit with a jam-packed itinerary in Shanghai, Beijing and Hangzhou, Lou and Han adopted their China advertising and public relations-based trip into a five-week online summer course.

The material was the same: lectures from professionals and “visits” to Chinese media companies, advertising firms, nonprofit organizations and universities. The only difference this year was that students didn’t get on planes, they opened their laptops and logged into Zoom.

Despite the hoops they jumped through to ensure their study abroad experience would still be a reality in the midst of the pandemic, Lou and Han thought the digital trip to China went well.

“The downside, of course, is you just see everything online and there’s no delicious food you can taste,” Lou said. “But, other than that, I think activity-wise it was pretty good.”

Of course, Lou said, the missing part of the trip was students’ ability to experience cultural learning.

Students heard from public relations and advertising professionals, but weren’t able to learn about Chinese culture in the way that riding public transportation, talking to locals and eating authentic food allows them to.

Han said that experiencing a new culture helps students understand their own better.

“For example, our (App State) students are really energetic all the time, and when we checked in at a hotel, they’ll stand there in a circle and talk very loudly while everyone was very quiet,” Han said. “I remember one student saying, ‘Wow, we are really loud Americans.’ I was like, ‘Yeah.’”

Lou and Han think their virtual study abroad program indicates a new wave of study abroad experiences. Because the pandemic forced universities to experiment with new genres of learning, they foresee a future of study abroad programs with a “mixed model” format. Students would be able to learn from professors and industry leaders across the world virtually as one portion, and could actually travel as another.

The professors are confident that the pandemic won’t put a wrench in studying abroad in the future, and are looking forward to taking their next batch of students to their home cities next summer.
“We make the best decisions with the best information that we have at that time”
When she was hired as App State’s director of education abroad, she didn’t know that she wouldn’t be able to do the one thing she was hired to do: send students abroad.

Chrissie Faupel started her position in May. She said the day she interviewed for the job, she saw the Office of International Education and Development scramble to bring students home as the virus began taking over Italy.

Faupel said starting her new job in the midst of the pandemic has been “crazy” so far. She hasn’t even met all of her colleagues in person yet.

Before coming to App State, Faupel had a similar position at the University of South Carolina, where eyebrows were beginning to raise about coronavirus. She’d been through Ebola. She thought it was localized to China –– it wouldn’t affect all of her students.

Before she officially began in OIED, students studying abroad in the spring 2020 semester had already been sent home and summer travelers had been told not to pack their bags and cancel their flights.

Faupel said it was the right decision to send students home, despite the potential worries of them bringing the virus back with them.

“We make the best decisions with the best information that we have at that time,” Faupel said.

She said it wouldn’t be ethical for students to stay abroad, especially if they were studying in the “global south,” in countries like Thailand and Chile.

“The American passport holds a lot of weight, and oftentimes, we have a lot of privilege holding that passport,” Faupel said. “If we do get sick and have to go to a hospital or clinic abroad, we would get treated first.”

The pandemic has put a new focus on student welfare when they’re studying abroad, Faupel said, but health and safety shouldn’t get in the way of letting students travel.

But, Faupel said, the pandemic has opened new doors for her line of work. She’s hoping to see virtual study abroad experiences become a mainstay for students who don’t want to travel or can’t afford it.

Faupel said students shouldn’t be discouraged or feel like they have nothing to show for their international studies if they were cut short. She said skills that employers want to see in applicants are highlighted in the experiences of students who studied abroad but were told to evacuate, like “time management and the ability to work with ambiguous situations and prioritizing competing tasks,” she said.

Faupel hasn’t let the pandemic damper her enthusiasm about her new job and the future of studying abroad at App State. She doesn’t see students being cautious of traveling in the future.

“There is a very large number of students out there who are raring to go, and as soon as we let them, they are out the door,” Faupel said.