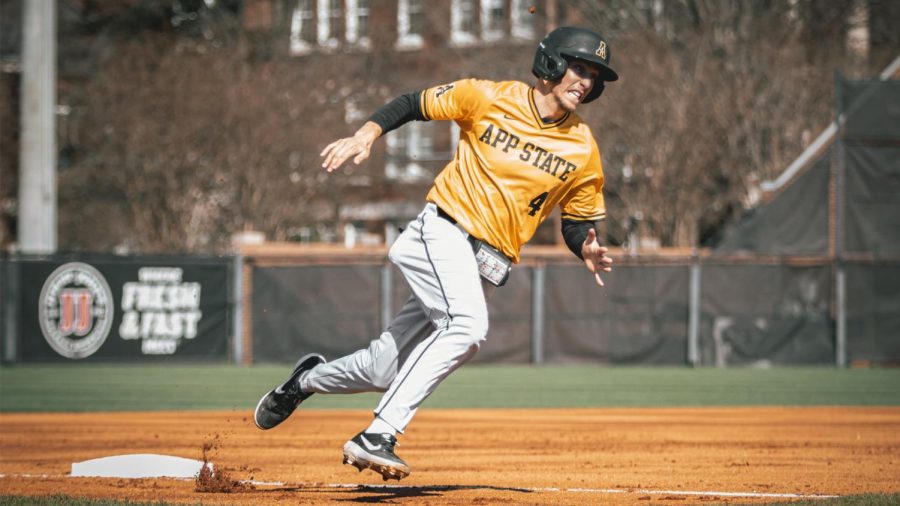 App State junior middle infielder Luke Drumheller hustles around third base during a game at UNC Greensboro last season. The Charlotte native broke out in his freshman season of 2019, leading the Mountaineers in batting average, hits, RBIs, doubles and OBP, en route to being named a freshman all-American by Collegiate Baseball News.

During junior infielder Luke Drumheller’s recruitment, the App State baseball team was not in the best place. The Mountaineers were coming off of an 18-36 season only two years after head coach Kermit Smith and his staff took over the program. The team had certain needs to fulfill, and one of those was a left-handed hitter.

In high school, Drumheller was an all-conference player his final three years and batted over .330 his last two years. His stats and accolades were impressive, but it was the intangibles that really caught the attention of the coaching staff.

“I think the thing that was probably the most impressive with him was how he commanded the entire respect of his team. He was by far the leader,” assistant coach Britt Johnson said. “You normally don’t see that in young kids, especially at the time he was a sophomore when all of this started.”

The thing that sold Drumheller on App State was  Smith’s commitment that Drumheller could be part of changing the culture surrounding App State baseball. Drumheller was already interested in App State, so when he got the call to become a Mountaineer, he didn’t hesitate.

“App was one of the top three schools I really wanted to go to. So, when they did offer, I was pretty dead set and I was ready to commit once they said the word,” Drumheller said.

After Drumheller arrived in Boone, nobody could have predicted what would happen next. As a freshman, Drumheller led the team with a .337 batting average, 37 RBIs, 67 hits and 15 doubles. His batting average peaked at .468 and was still at .400 through 29 games. This performance landed him on the Collegiate Baseball Freshmen All-American Teamand took his team by storm.

“Coming in freshman year, I was so happy to just be on the field,” Drumheller said. “I knew that I was just gonna go out there and do what I could to help the team. I didn’t even know really where I stood as to what role I played on the team, so my whole freshman year I was just grateful to be out there.”

Senior infielder Bailey Welch was a sophomore when Drumheller joined the team, and said watching Drumheller’s great first season at a young age was very eye opening for the team.

“We were coming off a pretty tough year, so with our freshman year, none of us put up those numbers,” Welch said. “Then to see somebody putting up those numbers as a freshman you take a step back and you’re like, ‘this is crazy.’”

Drumheller’s performance was something not even the coaches who recruited him could see coming.

“In recruiting, you miss and you hit, and that was just one of those where the roulette ball hit. I don’t know how in the world it happened,” Johnson said.

Now, Drumheller has developed into a leader for the team, a process accelerated by his high level of play. What allowed him to excel as a player and a leader boiled down to putting in the extra time and effort.

“More and more guys started doing extra work because they were trying to find out what was the secret sauce, and the secret sauce is not secret, it’s hard work,” Johnson said.

Early on in his first year, Drumheller was never extremely vocal, so instead he led his teammates by example. If he was playing really well and his teammates saw him in the batting cage, soon enough some of his teammates were in there doing the same thing.

“The guys aren’t going to follow you if you’re out there taking days off and being lazy,” Drumheller said. “I think I’ve done a decent job of leading by example and that’s one thing I pride myself upon.”

Drumheller’s efforts have started a trend that will only continue as more and more talented players join the team. With App State baseball more successful than it has been in years, Drumheller’s goal is to leave the program in a better place than it was when he arrived.

“Hopefully five, ten years from now looking back on my college career when App State is going to Omaha or winning the Sun Belt every year I can say, ‘Hey, I was a part of this program turning around,’” Drumheller said.