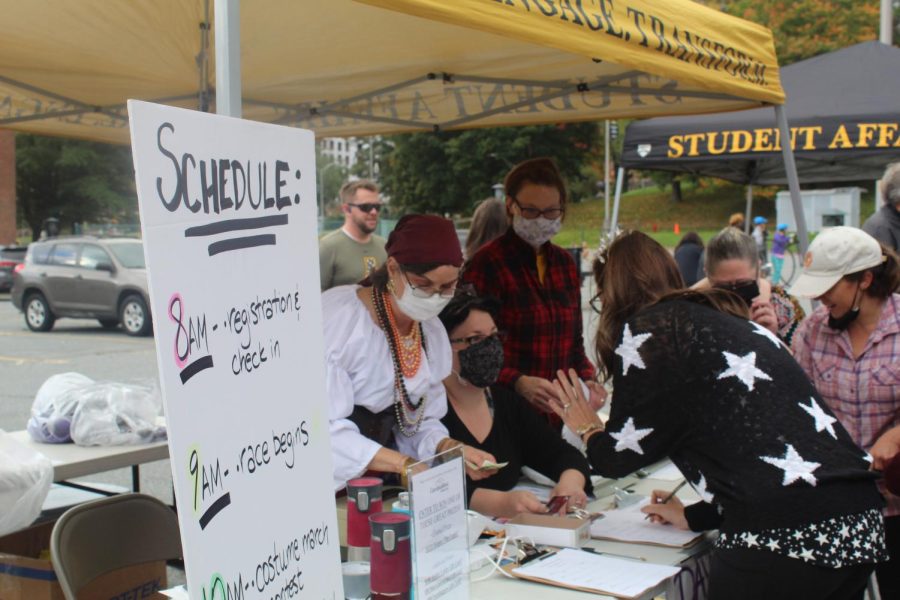 Participants checking in at the student affairs tent, where they sign the participant waiver and receive race T-shirts and swag bags.

The 11th annual Spooky Duke Race welcomed over 250 racers at Peacock Hall Saturday to raise money for Parent to Parent, a support network for families in the High Country.

The event featured a 5k race, a 10k race and a costume contest. Everyone attending the event was encouraged to wear a costume, said Kaaren Hayes, director of Parent to Parent.

“It’s just a way to get people together and have some fun,” Hayes said. “I think that’s something we’ve been really missing in our lives.”

Parent to Parent is housed in the Reich College of Education, but it serves seven counties in the High Country, Hayes said. The network aims to support families caring for children with disabilities or chronic health conditions.  It also offers services to families that have premature babies or children with emotional or behavioral challenges, as well as families who have lost a child.

The race also serves as a way to spread the word about Parent to Parent and allow the program to reach more people, Hayes said.

“One of our goals is to be there for any family that needs our help,” Hayes said. “Part of that is letting people know about us.”

Spooky Duke was created by Jennifer McClure, who at the time was an App State student and an intern at Parent to Parent. McClure was majoring in social work and curated Spooky Duke as her final project.

In 2014, Parent to Parent named the race after Charles Duke, former dean of the Reich College of Education, who became the event’s sponsor in 2013.

This year, Spooky Duke was held in person with a virtual option where racers could choose their own course. Participants came from as far away as Maryland to race in person, but people all around the country ran in the race virtually, from Hawaii to New Hampshire. Just over 70 people registered virtually, Hayes said, bringing the total number of participants to 335.

The finish list for the 5k. The 10k is coming to a close and people are starting to gather for the costume march. pic.twitter.com/0HdFvsOBNC

Angie Blevins, a participant from Johnson City, Tennessee, said she thought the race was organized well. Blevins races often and came in third place in the women’s 5k Saturday.

“I think it’s a really good cause,” Blevins said. “It’s a great way to raise money.”

Hayes said the event wouldn’t be possible without support from App State and its students. There were around 60 volunteers at this year’s race, she said.

Cassidy Ennis, a senior psychology major and intern at Parent to Parent, helped organize this year’s Spooky Duke. Ennis made the banner for the costume march and walked in the 5k with some members of Alpha Delta Pi, the sorority she’s in.

“That’s another beautiful thing about it,” Hayes said. “People are willing to donate their time to support in that way. That also feels really, really good.”

Maggie Farrington has participated in Spooky Duke for five years now. Farrington works for Covenant Case Management Services, an agency advocating for and providing services to people with disabilities. The two organizations work together closely and sometimes help the same families, Farrington said.

This year, Farrington was a team captain for the first time. She said Spooky Duke always draws in a diverse group of people and is always a great time.

“I love that it’s a very inclusive community,” Farrington said. “It’s a great example of what Parent to Parent Family Support Network is: families helping each other and supporting each other.”