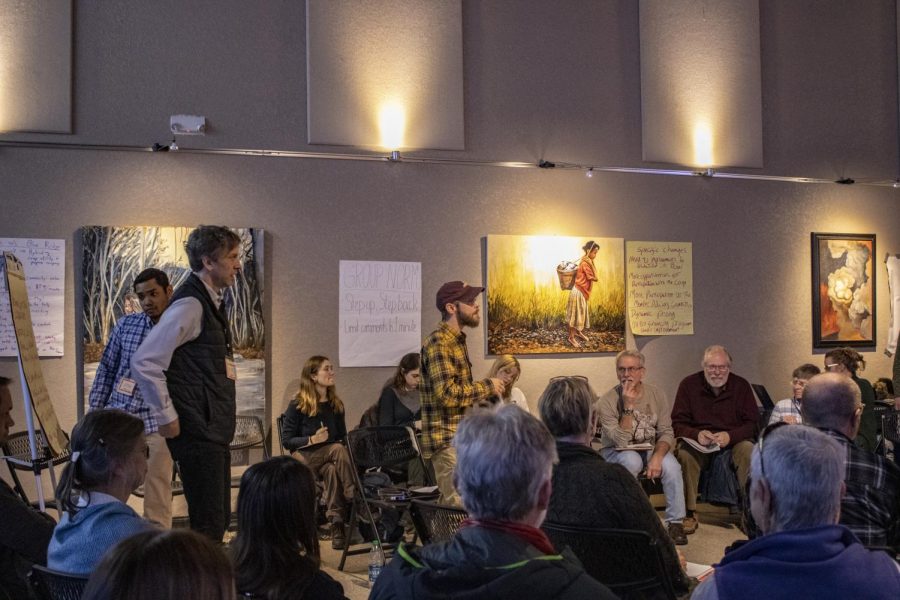 Community members and students alike gathered at Harvest House to discuss energy usage on and off campus Feb. 22.

Students, residents and retirees joined forces at the High Country Energy Justice Summit to create a “people’s vision” for the future of energy sources in the areas surrounding Boone and App State’s campus Feb. 22.

Madeline Parker is a youth climate justice organizer for NC WARN, an energy justice nonprofit that works with Energy Justice NC Coalition and Appalachian Voices and 12 other organizations to host events like the summit, which was hosted at Harvest House, across North Carolina.

“Using it as both a networking and community building tool, but also to learn more about the different pieces that the presenters and breakout groups are going to talk about,” Parker said.

The summit was one of EJNCC’s six Energy Justice tour stops across the state with the goal to end the “Duke Energy monopoly” in the state. The High Country summit was co-hosted by five local and state organizations, including Appalachian Voices, Climate Action Collaborative, Climate/Transition Blue Ridge, EJNCC and Sunrise Boone.

In 2018-19, the Strategic Energy and Water Management Plan also stated that 0.151% of App State’s energy came from renewable sources, such as wind, solar and hydroelectricity.

The Southern Environmental Law Center ranked North Carolina third nationwide in renewable energy development, but the High Country is one of the less-developed areas in the state. Parker said youth leadership has drawn more attention to the energy issue in the High Country.

“It is not just important but imperative to have youth not only at the table, but really with the mic in their hands and able to hear some of these conversations, especially the ones that are really timely (like) looking at the energy future 10, 20 years from now,” Parker said.

Max Johnson graduated from App State in August and is returning for graduate school in the fall. They said they have attended a few Sunrise Boone meetings and were interested in the summit because of their frustration with the “Duke monopoly.” Johnson said they are worried about apartment renters’ voices going unheard.

“I’ve lived in Boone for a while now, and I can see that there is potential to get to renewable energy,” Johnson said.

During breakout sessions at the summit, Johnson shared with the other full-time residents in their discussion group that they would like to see better energy options for renters in the High Country, for their economic health and the collective ecological footprint.

Despite the age range in the audience, many guests resonated with one woman, who said she felt “powerlessness.”

Terry Carroll, a former App State sustainable development professor, had a different take on solving the group’s feeling of powerlessness. He said corporations are not going to fix problems affecting the climate themselves.

“We fall into the corporate discussion by having these same conversations, just changing out windmills versus coal plants. It is still large, centralized, mega-corporation production and distribution,” Carroll said. “Isn’t that the problem already?”

Carroll has fought for climate justice for over 40 years, but others at the summit just joined the fight. Matt Wasson, director of programs at Appalachian Voices, said the young voices who will be most affected by climate change are moving this conversation.

“Of all the things that are going kind of wrong with the climate crisis right now, one of the few things that’s going right is this emerging youth leadership,” Wasson said.