Equestrian team back in Boone after 12 years 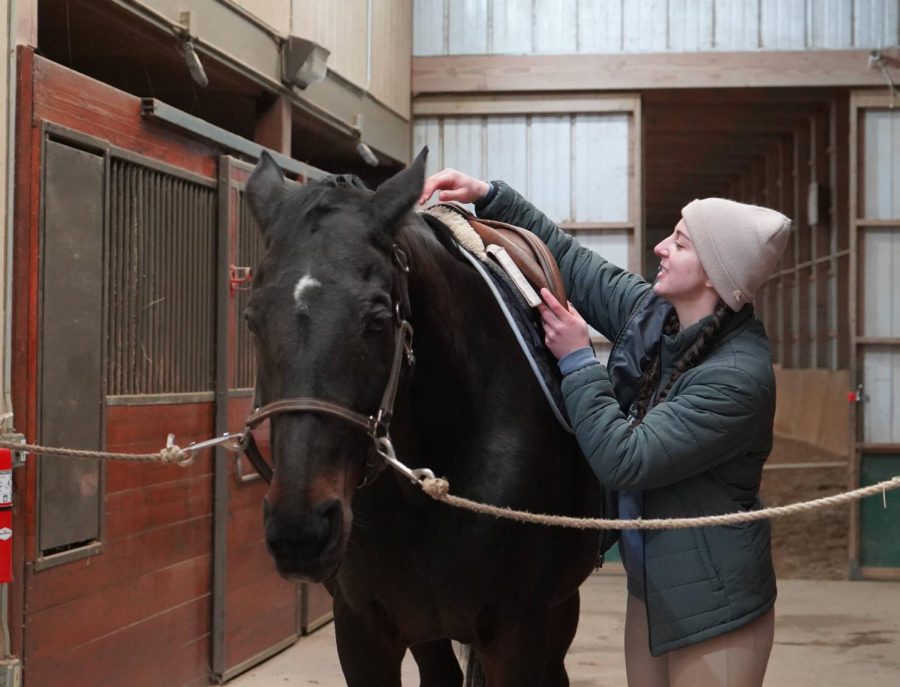 Vice President of the equestrian team, Grace Waugh, saddles a horse as the team prepares to ride Feb. 6, 2022.

For the past 12 years, one App State club team has traveled an hour from Boone to three different places to practice.

Now, the App State equestrian team will be in the same place for the first time since 2009 and only 10 minutes from campus at Yonahlossee Stables at Pine Hill.

The team, made up of three smaller teams, has Western riders, who do reigning, looping and pleasure riding, and English riders, who are split into a Dressage team and a Hunt Seat team. Hunt Seat riders work on form, being able to jump; equitation, which is walk, trot, canter; and working to connect with a horse in a short amount of time.

The Dressage team works on 20-meter circles, 15 and 10-meter circles, which are equitation patterns, and riders have to walk, trot, canter and do more advanced moves like lateral movement.

Carmen Shore, the equestrian team treasurer and facility change coordinator, said the team began practicing at three different barns to meet the needs of each discipline.

For the spring semester, the Hunt Seat team moved to Yonahlossee Stables early because of timing issues at their previous barn. They began practicing at the Boone barn Feb. 14.

The Western team also had resource and timing issues in Morganton, and Western riding will be limited for the spring semester until the team moves to Yonahlossee Stables in the fall. Next year, when the Dressage and Western team move to their new barn in Boone, the team will finally be located in the same place.

“We’ll all be at the barn at the same time. We’ll be able to see each other in passing, and we can have social gatherings out there, so I really think that it’ll help us become a more cohesive team rather than three separate disciplines,” said Waugh, a sustainable technology major.

Shore began working on moving the team to one barn when she joined the executive board in March 2021. In September, the rest of the board joined her in searching for a new home barn.

Shore visited barns in Boone, talking with different places until she found a space interested in a partnership. The team is aiming to finish moving the Western and Dressage team by August, giving them time to set up.

“I’m just looking forward to being able to host all of our current disciples in that one space and it being less than 10 minutes from campus,” Shore said. “I think the connectivity between the three teams has always been an issue. We’ve always kinda felt like we were operating as three separate entities.”

Shore said the move will save team members around 23 hours and three minutes of travel time per person. Yonahlossee Stables said they wanted to work with the team to help them grow and support App State athletics.

“I think we’re all just looking forward to having the team in the barn, seeing them grow as a team, using the knowledge and the facility that we have to help them grow,” said Nikki Barnes, managing director and head instructor of Yonahlossee Stables.

Ryan Carroll,  president of the university’s equestrian team and an English rider, started riding horses when she was eight years old. When she came to App State, she knew she wanted to ride with the team and joined despite the commute.

“One of the things I love being on the team is that I don’t feel alone,” said Carroll, a senior criminal justice major. “There are people who love to ride horses as well, and they just love being around the team itself, and we can all talk about it.”

The team welcomes anyone interested in riding horses, whether they’ve ridden for years or have never been on a horse.

“We are very accepting of everyone and anyone that comes,” Carroll said.

Split into a competing team and a noncompeting team, riders buy packages that set up how many times a week they practice. Carroll said the most common is the 10-lesson package, where riders can practice once a week. If riders want to ride more than once a week, they set it up through the coach.

“For a lot of people, I guess riding is therapy. With everything going on from classes and work schedules and drama and social life, for me personally, riding is very therapeutic,” Carroll said. “I think riding definitely gets rid of all the stress in your body.”

Riders set up lessons through the barn and can set practice to fit their class schedule. Competing riders also participate in practice rides before competitions, where they can work on improving skills they’re concerned about.

Although the team practices in three different places, they unite each week for their team meetings in Plemmons Student Union.

“We get a bad rep sometimes cause we’re called horse girls, and we’re supposed to be crazy, and we have to act like ‘Oh, we’re not crazy, I promise,’” Carroll said. “It’s kinda like you’re with people who understand what’s going on and understand the lingo and just overall being able to be together and understand each other.”

However, Haley Rogers, the former club sports representative and Hunt Seat team captain, said she thinks the distance has contributed to a lack of knowledge about the team on campus.

“I think a lot has to do with the time commitment that we have right now,” Rogers said. “Like, driving an hour to the barn, I think once that changes, then we’ll grow a lot more, and a lot more people will know about it because we’ll be located in Boone.”

Rogers, a sophomore nutrition and foods major, believes having the team close to campus will help with recruiting and retaining.

“We’re hoping that the team will grow a lot from the change too, given that it will be 10 minutes off of campus instead of an hour,” Rogers said. “More people have time for that.”

The team is also looking at creating a fourth group of recreational riders who can ride for fun without choosing a discipline and competing, adding to the options the team provides, Shore said.

“Change is definitely difficult for anyone, and this is a massive change, so there’s gonna be some growing pains for sure, but I think that in the end, it is going to be a good move for the future of the team to be here,” Waugh said.