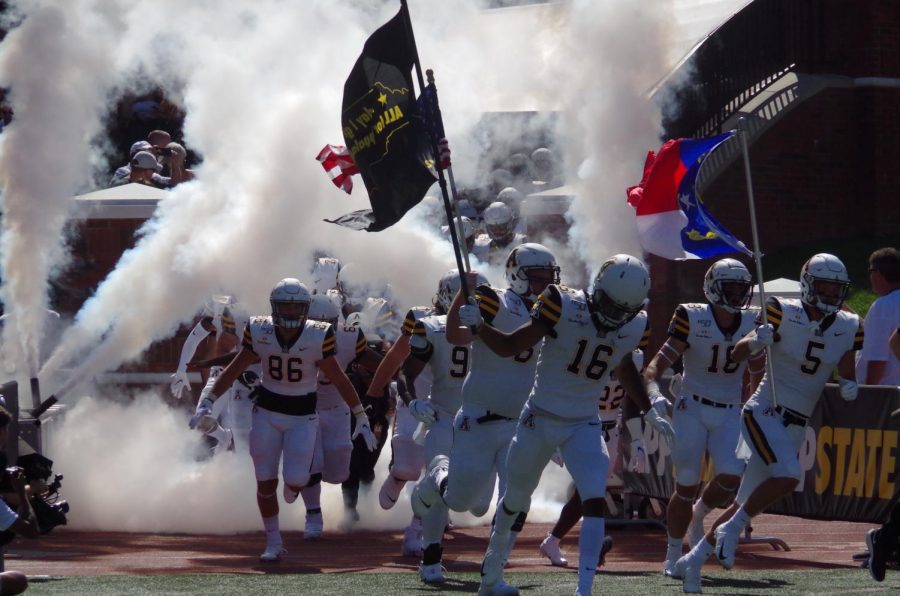 App State takes the field before its 56-41 win over Charlotte on Sept. 7.

On the first offensive play of the game, Darrynton Evans took a handoff and raced 87-yards untouched for a touchdown, much to the excitement of just under 30,000 fans.

App State beat Charlotte 56-41 on Saturday at Kidd Brewer Stadium, in a shootout that featured 97 points and nearly 1,000 yards of offense combined.

“Any wins a good win. Really proud of some guys stepping up and making some individual great plays,” head coach Eliah Drinkwitz said. “Darrynton Evans was superman out there.”

Evans, a junior running back, finished the game with a career-high 298 total yards and four total touchdowns. He rushed for a career high 234 yards on 19 carries.

With redshirt freshman Camerun Peoples out for the season after tearing his ACL against East Tennessee State last week, the running back group stepped up. The group totaled 272 yards on 29 carries.

“We have a lot of trust and faith in those guys,” Drinkwitz said. “They ran hard and ran behind the pads.”

Junior wide receiver Jalen Virgil had three catches for 86 yards and two touchdowns. The App State track team sprinter returned a kick for the first time in his career for 45 yards.

“In practice, I’m always right behind Darrynton watching how he hits the holes and everything,” Virgil said. “Taking notes from the G.O.A.T. just in case I get to get out there like I did today.”

Junior wide receiver Malik Williams set a career high for receptions and yards in a single game with six catches for 73 yards. After Thomas Hennigan caught a career-high seven passes in week one, this is the second week in a row that an App State wide receiver has had their career-high in receptions.

The Mountaineers started to gain momentum late in the second quarter with a forced fumble by junior defensive end Demetrius Taylor and recovery by senior linebacker Jordan Fehr that led to a touchdown.

“(Demetrius Taylor) made a great play off the end, and I was happy I was right there to get on top of it so our offense could get in and score,” Fehr said.

Charlotte’s next drive resulted in a blocked punt by sophomore cornerback Shaun Jolly recovered by redshirt freshman inside linebacker D’Marco Jackon for a 16-yard touchdown.

“Jolly with the blocked punt right before half was a huge momentum swing,” Drinkwitz said. “They practiced it all week and it was executed perfectly.”

Jolly also had his first career interception with less than a minute left in the game to seal the Mountaineer victory.

Not everything went the Mountaineers way against Charlotte. They gave up two runs of more than 50 yards and allowed Charlotte to score six touchdowns and 41 points. Last season at Charlotte, App State allowed only three field goals for 9 points.

“Thankfully, we got a win, but we got a lot of corrections to make,” Fehr said. “We just gotta get back to doing what we do. We’ll go back, watch the film and get better.”

While Drinkwitz was happy with the win, he said he was disappointed with some of the penalties. App State had 13 penalties for 148 yards.

“Obviously way too many penalties on our team, both offense and defense penalties and they’re just undisciplined and that comes back to me,” Drinkwitz said. “That’s going to be addressed and fixed.”

The offensive line allowed three sacks and three QB hits on Thomas during the game. The Charlotte defense also had six tackles for loss and three pass breakups.

“I get that we gave up some yardage on defense and all that stuff but there really wasn’t ever a point in the game where I was concerned about losing the game,” Drinkwitz said.

It was also the most points the Mountaineers have allowed total since the lost to Penn State in the 45-38 overtime loss on Sept. 1, 2018.