Asher Davidson and Will Hofmann

Donning a bushy black beard, a brimmed hat, suspenders and, sometimes, a corn-cob pipe, Yosef has seen an extensive evolution since his first appearance in the 1942 Rhododendron. As this year marks the 80th year since his inception, we traced Yosef’s 80 year evolution from yearbook placeholder to Mountaineer mascot through archived photos, newspaper clippings and old yearbooks.

Originally introduced as Dan’l Boone “Yoseff” in the 1942 Rhododendron, “Yoseff” was added so editors could fill a blank space, according to App State Athletics. Pictured as a freshman, his image on the final freshman page made all columns of pictures symmetrical. The image depicts him with a slender face, wearing suspenders, a tall hat and smoking a pipe. 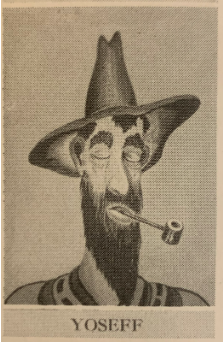 Yosef is an abbreviated mountain slang term meaning “yourself.” The hope of App State is that students, alumni, friends and family who are filled with school spirit have found “Yosef,” according to App State Athletics.

In 1946, Yosef appeared again as a regular opinion columnist in The Appalachian, writing a repeating column titled “Musings of a Mountaineer” each week. He covered topics from politics to local weather, often offering observations and jokes on current school issues while writing with a distinctive southern diction.

“I warn’t rightly agreeable at first to spoutin off my opinions for every young upstate to take advantage of, but I was promised my picture would be run next week so here I am,” Yosef wrote in The Appalachian in 1947. “I been around these parts a long time watchin’ the shenanigans and goings on and I spect I can hand out about the sagest piece of advice.” 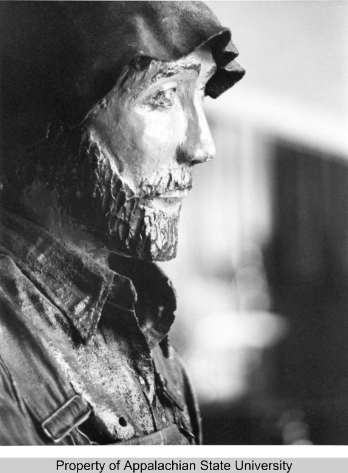 While App State Athletics’ website states the drop of the second “f” occurred in early 1947, this first opinion column posted in the Nov. 8, 1946 edition of The Appalachian has Yosef being spelled just with one “f,” indicating the transition from “Yoseff” to Yosef happened sooner.

In early 1947, Yosef’s likeness was included in the paper for the first time, again with a large beard, a black brimmed hat and a slender face. Yosef’s regular opinion columns ended in 1949, with a final column posted in the April 1, 1949 edition of The Appalachian. 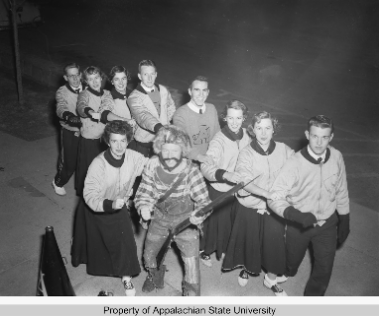 The summer before the 1983-84 school year, a logo committee joined together and changed Yosef from the more realistic mountain man image into a cartoon-like caricature with a new mascot suit, according to the Feb. 22 1983 issue of The Appalachian.

“We felt the need to have a mascot like the other universities. It would be easier for a costumed character to raise school spirit; people don’t have that pizazz,” said Jane Rex of the App State Athletic Office in the Sept. 1, 1983 issue of The Appalachian.

Although not the first to put on a Yosef costume, Todd Hutchinson was the first person to wear the revamped costume for athletics, according to the Oct. 13, 1983 issue of The Appalachian.

Hutchinson said he was first disappointed to wear the cartoon-like outfit, because he felt he was better at portraying the “laid back” country boy image he identified with.

“But, I see now where it takes a lot more effort and concentration to wear the costume. The responsibility is more intricate because you have to learn how to walk and make motions and deal with kids,” Hutchinson said. 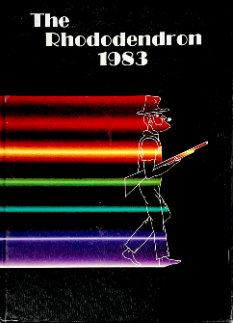 1999 saw the tightening of tobacco laws in North Carolina and yet another change in Yosef’s appearance. Yosef lost his cob pipe and gained a longer and more flowing beard as found in the Oct. 10, 2016 issue of The Appalachian.

App State Athletics reintroduced the “Vintage Yosef” in 2012 and its popularity soared, according to the Dec. 5, 2013 issue of The Appalachian. Due to this overwhelming love for the older mascot, the athletics department decided to officially make the “Vintage Yosef” the official secondary logo of App State. 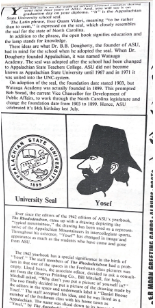 The mascot additionally had its name changed to “Victory Yosef’” and was used on merchandise as early as that year’s, 2013, holiday season.

“The support of ‘Victory Yosef’ has been overwhelming since bringing it back, so it just made sense to make it an official logo moving forward,” said Mike Flynn in the same article.

Yosef now is a very cartoon-centric logo that builds hype in fans and encourages students to give their all for Appalachia. His face covered in App gold topped with his signature slightly bent forward 10-gallon hat. In most images he is seen smoking his staple corncob pipe. His appearance includes the icon wearing black and gold suspenders, a black bushy beard, retaining some of the original elements of The Rhododendrons 1942 Dan’l Boone “Yoseff,” while moving away from the original slender design of the icon.