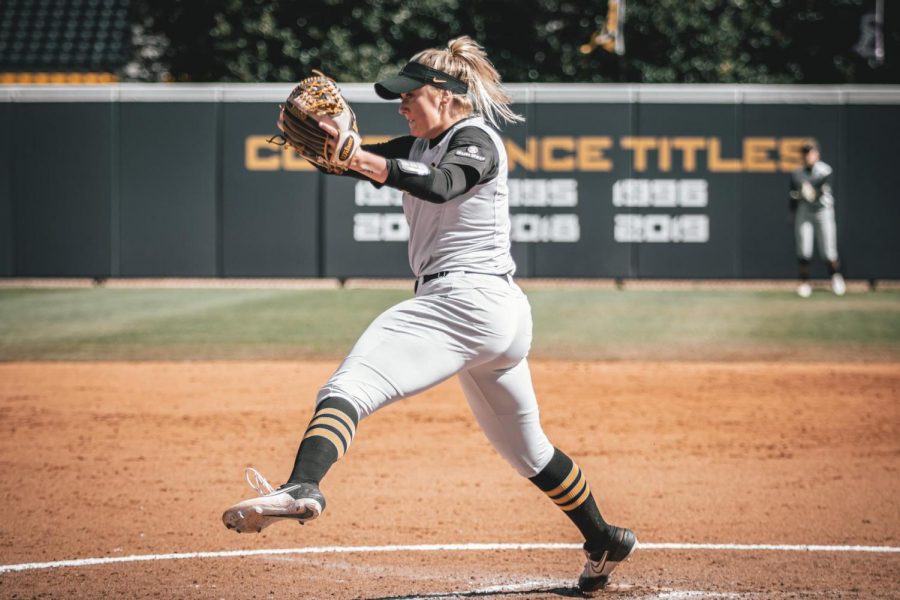 After App State senior pitcher Kenzie Longanecker went 14-9 with a 2.40 ERA in 2019, she became the first Mountaineer in history to be named a first-team all-Sun Belt selection. "I know I’m not the most vocal on the team, but I still do think of myself as a leader," she said.

In her freshman year, senior pitcher Kenzie Longanecker arrived at an App State softball program that had won just 11 games the season before, including 2-22 in conference play. This year, she leads a Mountaineers team that has posted winning records in consecutive seasons.

Longanecker solidified herself as a presence on the mound in the 2019 season, as she became the first softball player in App State history to be named to the all-Sun Belt first team, after posting a 14-9 record and 2.40 ERA. In last year’s shortened season, she led the team in strikeouts with 51, also good for 5th in the conference.

Beyond her individual success, in the past two years, the Mountaineers recorded consecutive winning seasons for the first time since the 2010 and 2011 seasons.

Longanecker accredits the team’s newfound success to the values of the coaching staff and program.

“I think the biggest thing was coming together and playing like a team,” Longanecker said. “Coach (Shelly) Hoerner came in with the mentality that we are a family, and I believe that that has really helped us work better together.”

For Longanecker and other senior leaders, success did not always come easy: across the 2017 and 2018 seasons, the Mountaineers posted a 31-69 cumulative record, including going 6-42 in Sun Belt Conference play.

Senior infielder Sidney Russell, who arrived alongside Longanecker in the 2017 season, said she understands the benefits Longanecker’s presence has brought the program.

“When we first came here, our pitching was very weak,” Russell said. “When Kenzie came, she showed the program what we were building, and as the years have gone by, our pitching has really improved.”

Having once been in the position of a newcomer herself, Longanecker understands the importance of her role as an experienced leader.

“I know I’m not the most vocal on the team, but I still do think of myself as a leader,” Longanecker said. “As a part of the pitching staff, I want my other pitchers to feel like they can come to me anytime for me to help them in whatever they need to be successful.”

As the final season of her collegiate softball career begins, Longanecker says she understands the mentality younger players must embrace to further the program’s success.

“Not every day is going to be your greatest day, and that’s okay, this should push you to be your best every day,” Longanecker said. “Never settle, and push yourself more than anyone else can.”

Longanecker is a recreation management major, and acknowledges some of the values that she can take away from the game of softball, and with her throughout the rest of her life.

“To get somewhere, hard work is a must,” Longanecker said. “You cannot glide through life and expect to go up from there. Just like from practice and experience, life has the same outlook.”

Longanecker and the Mountaineers return to action this weekend at UNC Wilmington, where they take on Seahawks in a four-game series. Each game will broadcast on ESPN+.