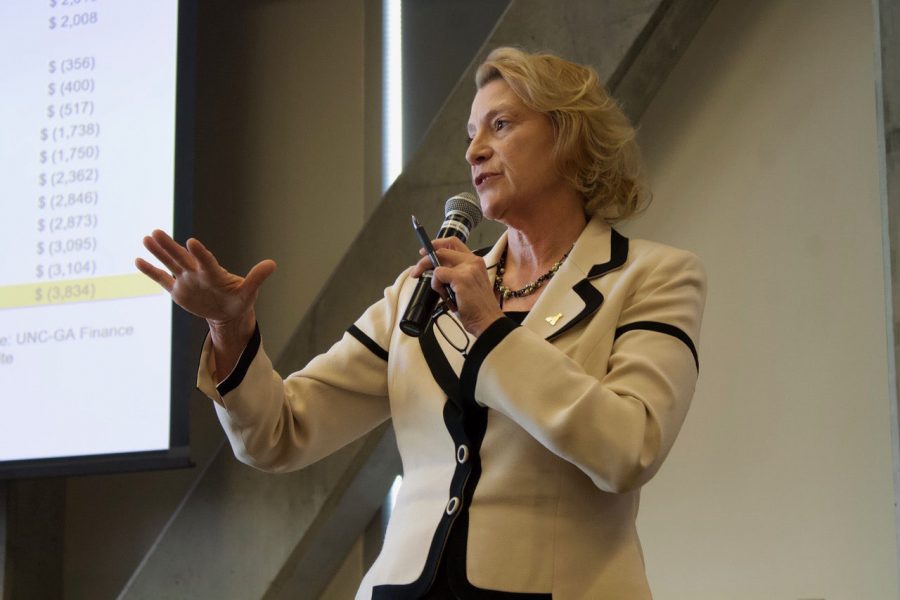 Chancellor Sheri Everts addressing faculty at a special faculty senate meeting called to discuss the stagnation of salaries in February 2018.

Chancellor Sheri Everts and a member of the Board of Governors met with faculty at a special Faculty Senate meeting called due to concerns about the administration’s decision to deny faculty pay raises.

Faculty directed questions and grievances to Everts, Board of Governor member Philip Byers and Provost Darrell Kruger at the meeting on Feb. 25.

The Senate Budget Committee presented research it conducted which ranked App State seventh overall in faculty salary and 15th in money that comes from the state.

Everts and Byers spoke to the over 300 faculty members who attended the meeting, before faculty commented and asked questions.

“I can assure you that merit faculty increases have been and continue to be among my top priorities,” Everts said during the meeting. “I would have very much liked to give a merit salary increase for the fifth year in a row.”

Faculty received a salary increase from 2015-2018 before receiving no increase in 2019.

“I have three priorities for that additional funding. The No. 1 priority is faculty and staff merit increases,” Everts said during the meeting. “That has not changed as a result of this meeting or any other conversation.”

She said her other top priorities were academic facilities and support for students.

Everts declined an interview after the meeting.

Many faculty were emotional as they spoke about their personal struggles caused by low salaries.

Jeanie Mercer-Ballard, associate professor in the applied design department, spoke about how she had a major health scare she will pay for until the end of 2019.

“My goal was to come here and listen and to hear what the status was and to learn more about the status of what we can do having been here for over 15 years,” Mercer-Ballard said.

Byers, who has been on the Board of Governors since 2015, said the funding for mountain schools has always been less than ideal.

“I’ll be the first to admit they are underpaid,” Byers said. “We’ve got to change that model of where the people doing the work are receiving a fair pay and that’s what I’m trying to do.”

Kruger also said he thought the meeting was successful.

“I think there was good dialogue,” Kruger said. “I think information exchange when you have an organization with 3,000 employees and 19,108 students, these sorts of meetings are beneficial.”

Barbara Howard, chair of the Faculty Senate and professor in the Department of Leadership and Educational Studies, said this was the first time faculty were heard.

“My hope was it would give faculty a chance to be heard and I pulled together the people who needed to hear them,” Howard said. “I think some good points were raised. I think there were good things that will come out of this.”

Howard works among the Faculty Senate Chair Committee across the UNC System and said no other university has done a meeting like this.

“They’re all waiting to hear how this meeting went and then they’re going to ask their chancellors,” Howard said. “So we’ll see if other chancellors have the courage to sit and listen to faculty.”

“I can leave and seek the support to grow the next generation of students to be the very best leaders,” Redmond said. “We’re not only asking for your support for ourselves, but for our students.”

Byers and Everts left the meeting after one hour for other meetings, but the provost and other vice chancellors stayed to take more questions.

Howard said she would make sure Everts responded to the faculty members who asked questions.

“I am going to follow up with them and make sure everyone who asked a question will be contacted,” Howard said. “I will make sure the minutes of this meeting will be written up and distributed widely.”