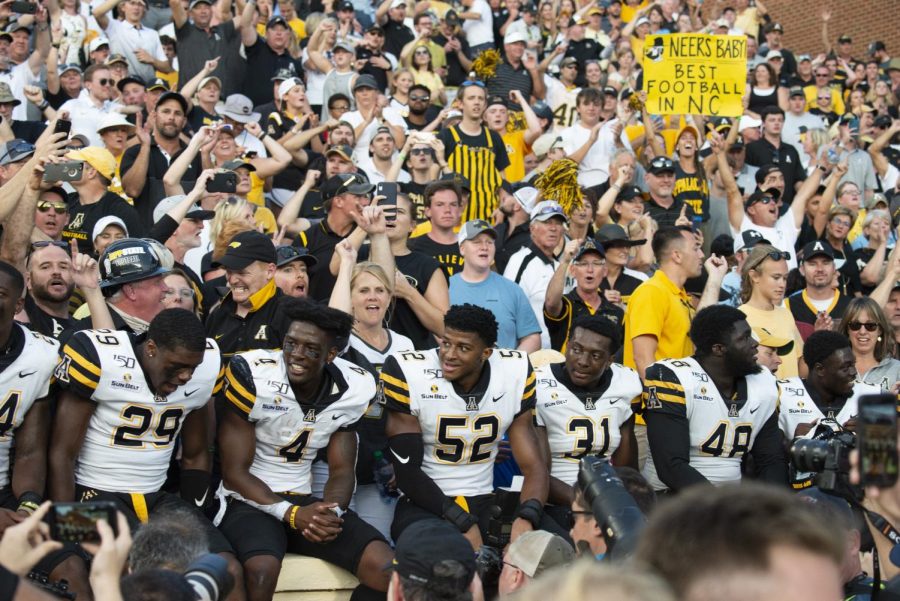 App State players celebrate with fans after last year's win over UNC. Despite a push for the families of players to be allowed, Kidd Brewer Stadium will be empty for at least the first two home games.

Kevin Garrison thought he’d get to see his son, Cole, an App State offensive lineman, play every game of his senior year. But COVID-19 is creating barriers to family members attending games.

App State Athletic Director Doug Gillin announced that there would be no fans at sporting events through at least September after Gov. Roy Cooper’s decision to move to Phase 2.5, in which large groups are still limited.

“Family is a little different,” said Garrison, father of senior offensive lineman Cole Garrison. “We can be around our kids and all that but we can’t be at their game.”

Many parents of App State football players have voiced feelings of frustration on social media, especially on Twitter, in an attempt to see their kids on the field in person. Gillin’s decision will extend through two home games, the opener against Charlotte and in Week 3 against Campbell.

“As a parent of a senior college football player in NC, I should be able to watch my son play if I choose to in person. I can wear a mask and practice social distancing in a college stadium.” Chad Hannon, father of senior offensive lineman Noah Hannon, said in a tweet.

Every parent’s situation is different, but many say they should have the opportunity to go to the games while maintaining social distancing and wearing a mask. This may be some players’ first game of their college career or first game as a senior, and parents don’t want to miss seeing these moments in person because they can’t get them back.

“There’s probably 250, 300 parents, so I would think we could spread out pretty easy over the stadium,” Garrison said.

Players have voiced their opinions on the situation, including senior wide receiver Thomas Hennigan.

“For many of us, this will be the last chances to play the game we love and want nothing more than to be able to showcase what we can do live in front of our families, friends, and alumni,” Hennigan wrote in a tweet.

Under the current guidelines, people are allowed to practice social distancing in large groups at places like grocery stores and restaurants, but sporting events are still not permitted to have fans at App State.

“I just find it hard that you can go into a Walmart or somewhere like that with seven, eight-hundred people in there and you can’t be outside at a football game and watch your own kid,” Garrison said.

Under current guidelines set by Cooper, smaller gatherings are allowed and stores are still open for large groups of people but sporting events still can’t have an abundance of fans.

It’s because of safety precautions that parents and fans aren’t going to be at the first two home games, but families believe they can stay safe by following guidelines in the stadium. It’s a risk some are willing to take to see their children play football.

“I feel like every parent has the right to be there for their kids, whether it’s their first game or their last game,” Garrison said.

The Kidd Brewer Stadium stands will be without fans as the Mountaineers open their season against Charlotte Sept. 12.