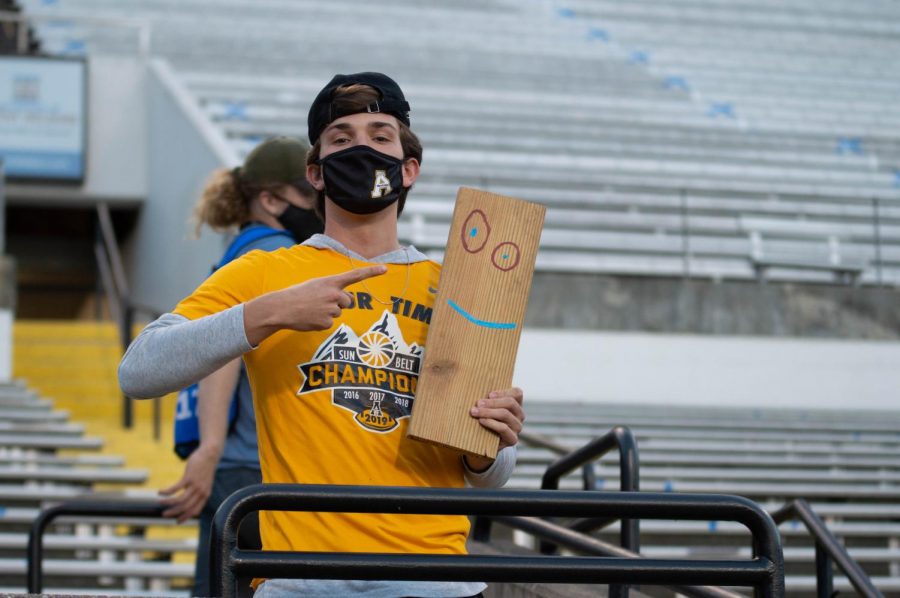 A limited capacity of fans were allowed at Kidd Brewer Stadium on Oct. 22 for the first time in 2020. The Mountaineers picked up a 45-17 homecoming victory against Arkansas State.

Oct. 22 marked the first time in 2020 that Kidd Brewer Stadium’s stands were filled with dedicated fans, and players heard cheering not from a speaker, but from fellow students, in App State’s homecoming victory against Arkansas State.

On Oct. 2, Gov. Roy Cooper moved forward with Phase 3, which permits bars, theaters, amusement parks and outdoor venues to open at limited capacities. Cooper is now allowing outdoor stadiums that host more than 10,000 people to open at 7% capacity. Kidd Brewer can seat 30,000 people, and the university allowed 2,100 fans to attend the game.

While students were excited to cheer on the Mountaineers in person, it was hard not to notice the differences between past games and this one.

“There was no band, no packed student section,” said Corey Brooks, a senior attending the game. “It was definitely exciting to be there, but it felt empty.”

Richard Campbell, a junior transfer student, wished it could have been packed for his first game as an App State student. He has been to games in the past and it meant more now because he was a student, but he could tell that overall the experience was not as it should be.

“There was a girl behind us and the whole time she was by herself. That’s not the game day experience I want,” Campbell said.

While some students were disappointed with how different game day felt emotionally, they did say that App State did a good job sticking to COVID-19 protocol.

“There were a lot more event staff visible,” Sara Wocher said. “Definitely one in every section, walking up and down the stairs throughout the game.”

Those in the stadium that were not taking the privilege of getting to be there seriously frustrated Wocher, and she wished App State would be stricter enforcing the rules. She said event staff would remind various groups of students to keep their masks on, but as soon as they walked away, the mask would come back off.

“If you aren’t putting it on then you should simply be asked to leave,” Wocher said.

She said those who broke the rules took away from those who followed what was asked of them.

There were some new, unusual upsides to this different formatting of the App State game day experience, though.

“I could see better from my seat than I could from previous years,” Brooks said.

App State is currently planning to allow fans into games for the remainder of the 2020 season under official guidelines. To get tickets, students are required to register for the ticket lottery through an email App State athletics sends in the week before game day.