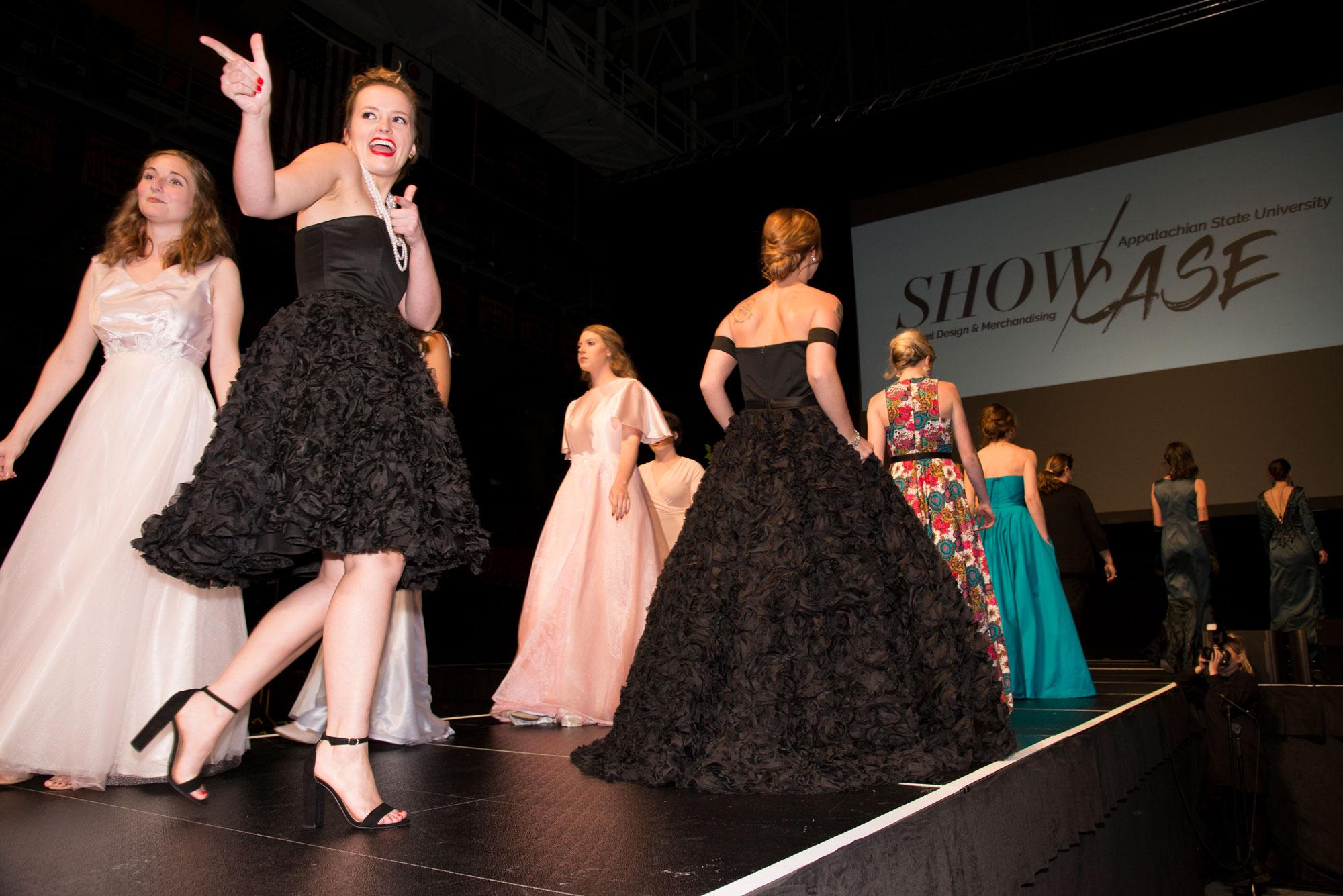 The models for the 2017 Senior Aparel Design Fashion Show walk the runway.

In every field of study, it is critical to gain real-world experience. For Apparel Design and Merchandising students, they can get some experience at the department’s yearly showcase.

On April 23, students and faculty in the Department of Applied Design put on a show in the Holmes Convocation Center to exhibit work from the program’s senior students.

“Showcase is basically an annual exhibition of student designs, with some brief demonstrations of faculty designs too,” Anthony Wilson, a professor in the Apparel Design and Merchandising program, said.

Wilson, as faculty director of the showcase, has been planning the show for quite a while.

“I determine the number of committees that students serve on to help plan the show, I determine the showcase timeline, I get weekly updates from the students, all of that,” Wilson said. “I’m also the backstage manager, I book the venue, anything really that’s associated with producing the show falls on me.”

Wilson is also the faculty instructor for the Apparel Design Studio Four class, which is partly responsible for putting on the show.

Wilson believes that putting on an event like this is an important way for the students to demonstrate what they have learned.

“It’s a way for them to show the culmination of all the work that they have done and the skills that they have acquired during the time that they’ve been at Appalachian,” Wilson said.  “It’s basically a senior showcase, everything they’ve done in their four years culminates in this showcase.”

The showcase is representative of the work students will be doing in the industry upon graduating from Appalachian.

“They’re creating apparel collections from concept to completion. They’re coming up with their inspiration, doing a storyboard, a presentation and a series of sketches,” Wilson said. “I help them whittle that down to a three-piece collection, they create the original patterns for those garments and then they actually produce those garments.”

The showcase provides a capstone experience and an overview of the industry for seniors.

“It’s interesting to learn about the different aspects of the industry,” senior apparel design and merchandising major Taylor Stephens said. “It helps you appreciate the T-shirt you’re wearing, and a lot more besides [that].”

Stephens and her fellow students have put in endless hours of work in the lab to prepare for the showcase.

“Pulling a 12-hour day in the lab sounds like a lot at first, but it’s been kind of the norm for all of us,” Stephens said.

Stephens put three works into the showcase, narrowed down from a larger number and modified several times.

“You pick what’s the most cohesive out of the group. You can make changes to your designs along the way. I’ve definitely had to do that,” Stephens said. “The sketches you envision don’t always work out when they come to life.”

“I transferred here specifically for this major, and the opportunities that I’ve had here have made it totally worth transferring,” Stephens said.

The Apparel Design and Merchandising program at Appalachian has experienced growth as a direct result of the showcase.

“A lot of people really had not known that we were here, but we’ve been a part of Appalachian basically since its inception,” Nancy Oliver, the program’s coordinator, said. “We’ve had a couple of different names, but our visibility has really increased within the last five years.”

The production has increased in size exponentially since the first full-scale showcase event in the spring of 2010.

“We had it at the Broyhill for a couple of years, then we had it at Harvest House, last year was in the Schaefer Center and now it’s grown to the Holmes Convocation Center,” said Oliver.

As the size and participation of the event has grown, so has the public interest in the event and the Apparel Design and Merchandising program.

“I would say that there were maybe 150 at the first one, last year at the Schaefer Center there were around 600, and we’re anticipating a really big crowd this year in the Holmes Center,” Oliver said. “It has really grown substantially in the years since that first showcase.”

Oliver believes that in addition to the publicity that the event brings the university, it is also very important for the growth and development of the students in the program.

“I’ve had students come to me at the beginning of the semester saying that they don’t know if they can do this, and here they are,” Oliver said. “It’s just one of those stepping stones, and I believe this in everything. We don’t know what we can accomplish until we’re forced to do it, and then we’re kind of amazed at what we can do.”