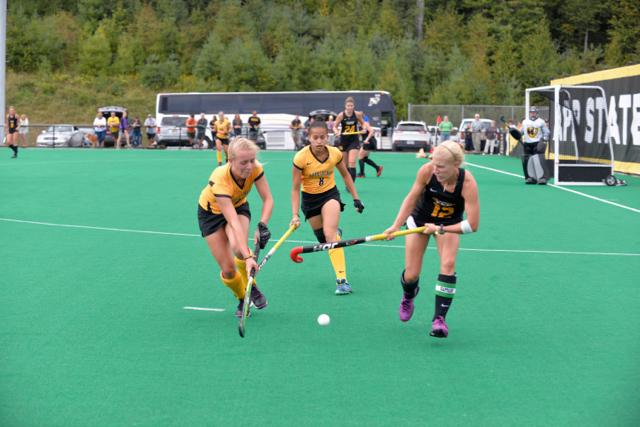 Appalachian State field hockey was defeated by the visiting Virginia Commonwealth University Rams Sunday afternoon, by a score of 5-1. The loss is the fifth on the season for the Mountaineers.

The scoring started early as VCU (3-3) took a 2-0 lead just 12 minutes into the game. Both goals were scored on penalty corners, an aspect that the Appalachian State defense struggled with all game.

“We had a lot of girls just running around,” Dawson said. “They know what to do. It’s just about trusting themselves in the moment.”

After the first two goals, the Mountaineers (1-5) settled in and had plenty of chances to score, a theme that was apparent throughout the game. With just a few minutes remaining in the first half, VCU added another goal to make it 3-0 at halftime.

“We were strong in terms of getting shots on goal, but we couldn’t finish anything,” Dawson said. “That really hurt us. Going forward, we’re just going to have to focus on finishing our opportunities.”

Midway through the second half, the Rams scored another goal, making the score 4-0. However, the Mountaineers responded with a goal of their own, coming from the stick of junior Rebecca McLean.

McLean said that the play did not go as planned. She was supposed to take the initial shot, but the team messed the play up, and she was forced to pass. McLean was able to find a hole in the defense and got a pass from a teammate to set up the shot.

“I just hit it on-cage hoping someone would be there, and it ended up going in,” McLean said.

The Rams would go on to tally another goal before time expired, extending the final score to 5-1.

Moving forward, McLean said that the Mountaineers will need to play better as a team, not depending on a couple people to take the ball forward.

“We definitely have options,” McLean said. “It’s just that second effort and following through to get the ball over the line.”

Dawson also said that the team will work on mentally staying in the play.

“Sometimes we do something good, and we lose track of it or we stop thinking about putting [the ball] in [the goal],” Dawson said.

One thing that never wavered, regardless of the scoreboard, was the energy and cheering from the fans. Members of the university’s wrestling team, women’s basketball team and more were on hand to cheer for their fellow student-athletes. Dawson said that kind of support adds to the college experience.

“It’s definitely awesome having our fellow athletes support us,” McLean said. “The more people that can come out here, the more we feed off of it.”
The Mountaineers will continue their four-game home-stand on Sept. 23 at 5 p.m. against California.