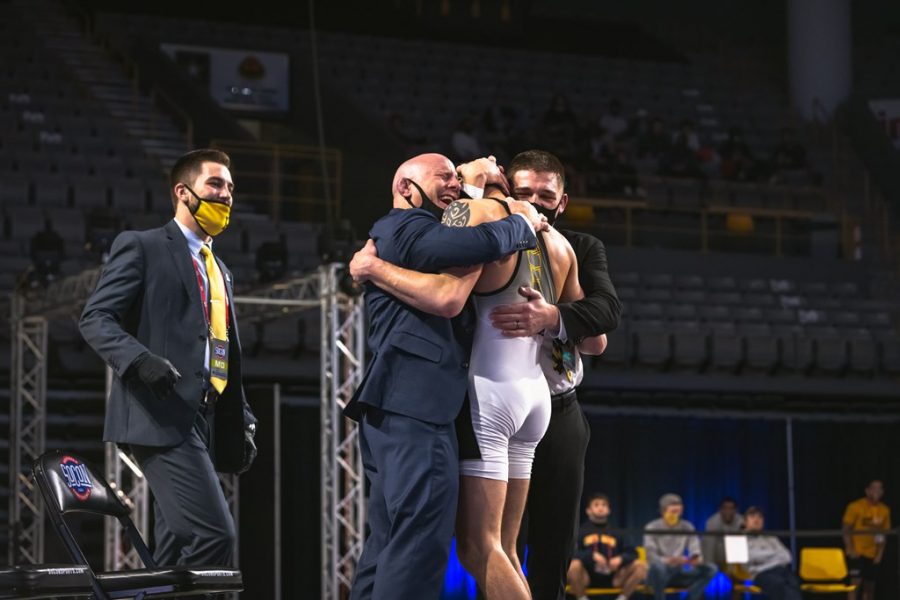 App State redshirt junior Cody Bond embraces head coach JohnMark Bentley and assistant coach Ian Miller after winning an individual SoCon title on Sunday night in Boone. Bentley said part of the reason the match was so emotional was because of how far Bond has come on his journey at App State.

In the first overtime period of the 2021 Southern Conference 157-pound title match, App State redshirt junior Cody Bond hopped around the mat, precariously balanced on his left leg with his right leg suspended in Campbell’s Benjamin Barton’s grasp for what felt like an eternity.

In reality, those 15 seconds that Bond miraculously fought off his opponent’s takedown gave him the chance to extend the match, which was all he needed to secure an emotional title match victory.

“Shoutout to (Jonathan Millner), because he does that to me, that exact same thing,” said Bond. “I’ll pick up his leg, and he will somehow fight his leg back down, so I was just trying to hone in on my inner ‘Jon-Jon.’”

The Mountaineers claimed five individual conference championships on Sunday at the Holmes Center in Boone, tying a program record set in 2003. With two of App State’s top-25 ranked wrestlers not winning their respective brackets, the team has a chance to break a program record for most NCAA qualifiers in a single season, if both redshirt sophomore 165-pounder Will Formato and redshirt senior 174-pounder Thomas Flitz earn at-large bids to the tournament.

“Obviously, we’re disappointed we didn’t win the team title because that’s the main goal,” Bentley said. “But it’s hard to hang your head when you’ve got five champs and, likely, should have maybe a program record NCAA qualifiers.”

In Bond’s clutch, late championship win, he opened the second overtime period with a chance to go on the offensive, securing a monumental four-point near fall.

Bond kept Barton from scoring points for the rest of the match, claiming his first individual SoCon title with an electrifying double-overtime 10-5 decision victory, also automatically qualifying himself to compete as an individual in the NCAA Championships in St. Louis March 18-20.

“For me, it was really emotional. I had tears in my eyes, and I don’t know — I mean, I typically don’t react like that after someone wins, but man, it was just so much emotion built up,” App State head coach JohnMark Bentley said. “I’ve coached all-Americans, I’ve coached numerous conference champs. That’s one of the most rewarding wins to ever coach, for me.”

After going 1-2 as a freshman in 2017-18, Bond spent the 2018-19 season away from the team. He said during that time, he had to find his love for the sport again, and when he got back on the roster he fully bought into the program.

“I just couldn’t be more proud of him, we had a long embrace there after the match,” 12th year head coach Bentley said. “Those are the moments that — it’s why I coach. There’s a lot of lows, but moments like that remind me why I coach, for sure.”

But that’s still not all that’s noteworthy about Bond’s championship. After the preliminary rounds, App State was in second place in the team standings, trailing Campbell 83-72. Thanks to individual titles from redshirt junior Jonathan Millner, redshirt senior Codi Russell, sophomore Sean Carter and redshirt junior Anthony Brito, the Mountaineers shortened the deficit.

Going into Bond’s match, which was the seventh out of 10 championship matches, App State trailed Campbell by just two points at 86-84. The victory earned 3 points for the Mountaineers, giving them an 87-86 advantage with three matches to go. Although App State ended up placing second in the team standings, Bentley was proud that Bond helped give his team a legitimate chance at the title.

In his two years as a starter, Millner has amassed a 20-0 record in SoCon duals and tournament action. The redshirt junior from Greensboro qualified for NCAAs for the second time, after winning last year’s SoCon title as well.

App State’s No. 18 ranked 125-pounder Russell claimed his second career SoCon title with an 11-4 decision over Campbell’s Zurich Storm to qualify for the NCAA tournament a third time. After finishing second at 133 pounds at last year’s SoCon tourney, he earned an at-large bid.

“Honestly, this one felt a little bit different, just coming from losing last year, and then making the sacrifice to drop down to 125,” Russell said. “It’s hard to celebrate the win though, because I just thought we were going to win the team title.”

After the match, Russell said he plans to come back for another season next year, made possible because the NCAA granted another year of eligibility for all winter sport athletes.

In the 133-pound weight class championship, Carter defeated The Citadel’s Jake Rotunda by a 3-1 decision to claim App State’s third individual title of the night and the first of his career.

“I wanted to score more points than I did, but I just got the job done,” Carter said. “This year, I had to go up a weight class, (there were) tough guys that I wrestled, but still, it means a lot to get this.”

Anthony Brito, App State’s 141-pounder, knocked off Campbell’s Shannon Hanna by a 7-3 decision in the championship match to set the table for Bond’s lead-taking victory. In his first year as a starter, Brito didn’t want to let the opportunity slip away.

“It was exciting, because I’ve been around this tournament for the past two years now,” Brito said. “I’ve been helping get these guys ready, and I’ve been itching to participate in it myself.”

Now, the Mountaineers have a little over two weeks to prepare for the national tournament. The NCAA plans to release the full bracket of automatic and at-large qualifiers on March 10.

“We’ve gotta have our best wrestling together when we get to St. Louis in a couple weeks, and I really think that some of our guys are really starting to kind of fire on all cylinders,” Bentley said. “I’m excited about our chances in St. Louis.”