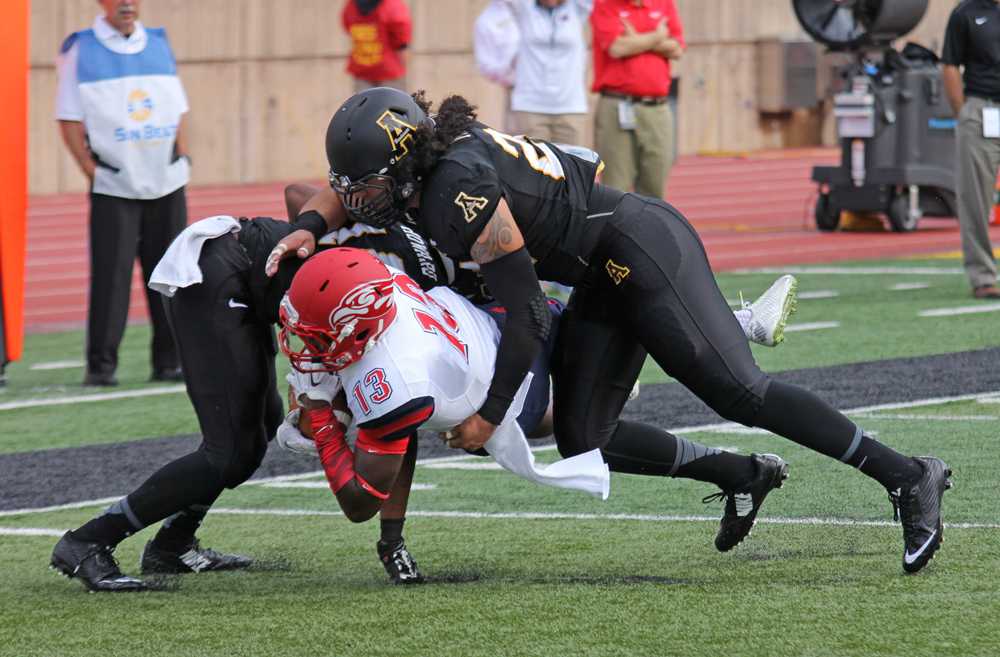 Photo by Paul Heckert | The Appalachian

The Mountaineers won six straight to close out their first season in the FBS, finishing third in the Sun Belt Conference despite a 1-5 start.

We learned a lot about head coach Scott Satterfield and his team, but here are five key things to remember from this season.

Lamb started the last 10 games of the season for the Mountaineers and despite some early growing pains, the young quarterback capped off a great season with six straight wins as a starter.

The redshirt freshman threw for 2,281 yards and 17 touchdowns with just nine interceptions in 295 attempts.

Lamb’s completion percentage for the year was 61.4 percent and he seemed to gain more confidence with each win.

Lamb was a large part of App State’s offensive success, but he was backed up by a great running game, which leads us to discussing sophomore running back, Marcus Cox.

Cox is a special player

Cox ran for more than 100 yards in six of his last seven games and eight games total on the season.

Part of a three-pronged ground attack, Cox was easily the biggest threat to opposing defenses as he torched the Sun Belt and other opponents for 1,415 yards on the season, good for the 16th best rushing total in the FBS according to www.espn.com. Cox also found the end zone a team-high 19 times.

Cox had a great season as a freshman, too, so the future is certainly bright for the explosive rising junior running back.

There is no quit in this team

At 1-5 in the team’s first season in the FBS, it would have been very easy to phone in the season.

The Mountaineers didn’t, however, and that speaks volumes to the team’s character and coaching.

In fact, the Mountaineers didn’t just refuse to give up; they thrived, finishing third in the Sun Belt with a 6-2 conference record.

Depth is a strength

The Mountaineers are a talented team, but also a deep team.

App State is fortunate to have three running backs that played major roles this season. Backing up Cox, redshirt freshman Terrence Upshaw and junior Ricky Fergerson both ran for more than 300 yards and combined for seven touchdowns.

At wide receiver, juniors Simms McElfresh and Malachi Jones who compiled 484 and 585 yards, respectively, led the Mountaineers. But behind them, two other receivers amassed more than 200 yards and freshman receiver Shaedon Meadors helped with three touchdowns.

The wealth was spread on defense, too, as three members of the secondary intercepted two or more passes.

The future is bright

The six-game winning streak gives this App State team a lot of confidence heading into next season.

With the emergence of Lamb and the continued success of the running game, App State’s offense should be set for next season.

Defensively, App State will lose some pieces, but young faces like sophomore linebacker John Law should keep the unit competitive.

The NCAA denied App State’s bowl waiver this year, but they will be bowl-eligible next season.

As the Mountaineers look to keep trending upward, a bowl could be a very real possibility next season.