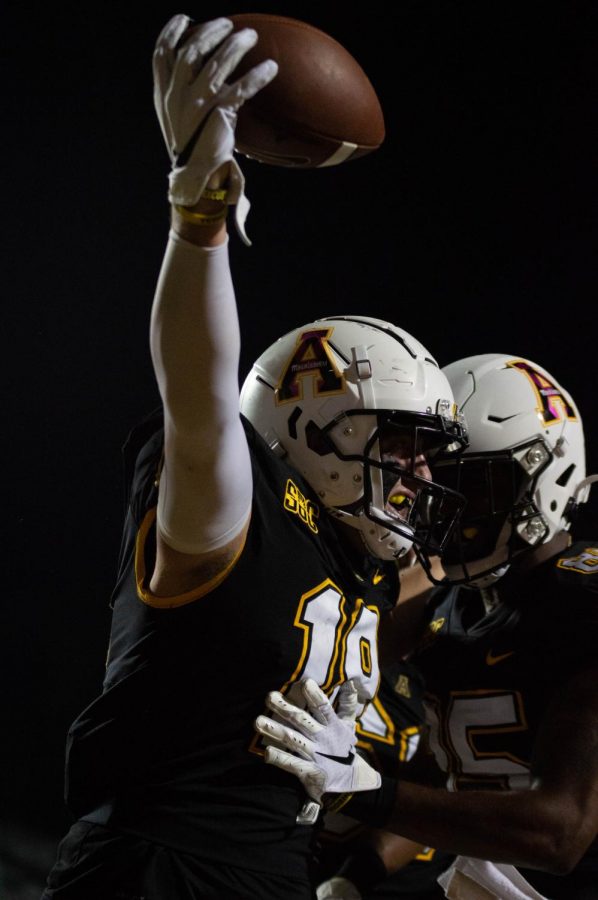 Senior quarterback Zac Thomas was named the preseason Sun Belt offensive player of the year in August. Through the first three games, he only had two passing touchdowns, one rushing touchdown and two interceptions. Against Arkansas State, he reminded fans why he was named preseason player of the year: Thomas threw for 216 yards and four touchdowns on 16-23 passing, and added 82 yards on the ground, including a spectacular 60-yard touchdown run in the third quarter. Thomas had a total quarterback rating of 98.4, which was the highest of all FBS quarterbacks this week.

After a 26-day hiatus, there were some questions about how well App State would be able to contain the Red Wolves offense, who came into the game scoring over 50 points in two straight wins. Those questions were put to rest when the Mountaineers recorded six sacks, 12 tackles for loss, five pass breakups and two interceptions en route to a dominant 45-17 win. App State limited Arkansas State’s run game to 2.1 yards per carry on 35 attempts for 73 yards. The only teams to hold Arkansas State’s offense under 20 points in the last three seasons are Alabama, Georgia and App State, who has done it twice, the other time in 2018 when the Mountaineers won 35-9.

3. Daetrich Harrington is emerging as a lead running back

Junior running back Daetrich Harrington took most of the snaps at running back in this game. Coming into the season, head coach Shawn Clark said there wasn’t a clear No. 1 running back for the Mountaineers. Harrington, along with senior Marcus Williams Jr. and sophomore Camerun Peoples, had been sharing touches out of the backfield. Against Arkansas State, Harrington had 18 carries for 137 yards and a touchdown. Peoples had 12 carries, but wasn’t as productive with only 21 yards. Williams only had one carry, which he ran 53 yards, but fumbled the ball and didn’t see another carry the rest of the game. With how well Harrington has been playing lately, it would be no surprise to see him getting more snaps than the other two running backs moving forward.

The Mountaineers turned the ball over twice in this game, both of which occurred after big plays. The first was an interception from quarterback Zac Thomas, which occurred one play after App State linebacker D’Marco Jackson picked a ball off himself. However, the defense responded well and held Arkansas State to a field goal try, which they missed. The other turnover was a fumble from senior running back Marcus Williams, who coughed up the ball after a 53-yard run. The App State defense came up big once again, stopping the Red Wolves on 4th and 2 to get the ball back for the offense. Although it is never ideal to turn the ball over, having a defense to bail out the offense in those instances helped the Mountaineers out.

5. Young playmakers add even more depth at the receiver position

Before the season started, star senior wide receiver Corey Sutton announced he would opt out of the 2020 season. The Mountaineers still had an experienced group at the position, including seniors Thomas Hennigan, Malik Williams and Jalen Virgil. Against Arkansas State, Thomas completed 16 passes to seven receivers. Williams had six catches for 78 yards and a touchdown, Hennigan had one catch for 12 yards, and Virgil did not play due to an injury. Redshirt freshman Christian Wells was the surprise of the night, with three catches for 80 yards and two touchdowns. True freshman Christan Horn caught the first two passes of his Mountaineer career for 25 yards. Extra depth at the wide receiver position will help to spread the field and allow backup receivers to easily fill spots when another receiver has to miss a play or a game.