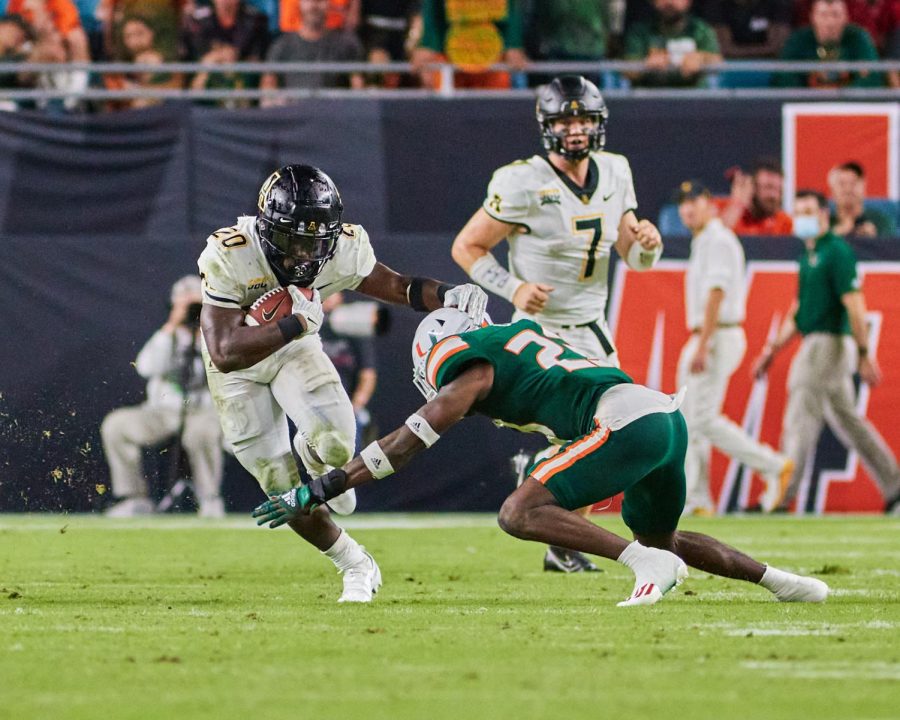 Sophomore running back Nate Noel avoids a Miami defender during one of his 16 rush attempts. Those 16 attempts were good for 51 yards as the Miami native played in front of his hometown.

After allowing just 86 rushing yards in their opening victory against East Carolina, App State struggled to contain Miami on the ground, giving up 175 rushing yards.

While the Mountaineers held Hurricanes quarterback D’Eriq King to 200 passing yards and no touchdowns in the air, they were overwhelmed by Miami’s multi-threat, dynamic rushing offense. The tandem of halfbacks Cam’Ron Harris, who rushed for 91 yards and a timely third quarter touchdown, and Donald Chaney Jr., who put the Hurricanes on the scoreboard initially with a 1-yard rush, totaled 112 yards rushing.

King, who initially played receiver at Houston and made the transition to quarterback, totaled 79 yards on 19 rushes.

Jalen Virgil’s 100-yard kickoff return touchdown and Caleb Spurlin’s blocked field goal gave the Mountaineers a 14-12 lead headed into halftime; however, special teams errors made the difference at the end of the game.

Following the 28-yard touchdown run by Cam Peoples in the first quarter on the Mountaineers’ next drive, a bad snap flew over punter Xavier Subotsch’s head, resulting in a safety and giving the Hurricanes a 9-7 lead early.

With the game ending in a 25-23 final score, the safety proved to be the difference maker.

Additionally, following the go-ahead 3-yard touchdown reception by Malik Williams with just over six minutes remaining, the Mountaineers failed to convert a 2-point attempt which would have given them a 3 point lead. Instead, the Hurricanes marched down the field and took the lead with a 27-yard field goal.

In a back-and-forth battle in which two points decided the victor, App State would have liked to see those potential four points swing in the other direction.

While App State’s defense put pressure on No. 22 Miami throughout the game, the offense allowed the Hurricanes to keep the game close.

Early in the first quarter, a Chase Brice interception at App State’s own 6-yard line put Miami in the position to score first. Later in the third quarter, following an 18-yard run by Peoples and a 23-yard catch by senior tight end Henry Pearson on consecutive snaps, App State settled for a 22-yard field goal from Chandler Staton at Miami’s 5-yard line.

The Mountaineers moved the chains on just five of 15 plays on third down and on just one of their three attempts on fourth down.

Nine second half points by the App State offense were not enough to lift them to victory.

4. A lack of late-game execution

Though the defense kept App State in the game throughout the contest, the offense failed to execute when it mattered the most.

Following the failed 2-point attempt that held their lead to one point, the Mountaineers gave up a 10 play, 55-yard drive which resulted in a 43-yard field goal from Andres Borragles to put the Hurricanes up two.

Miami held App State to 22 yards on six plays, during their final drive, before turning the ball over on downs. Three incomplete passes in four attempts from Brice was enough for Miami to take over and run the clock down en route to victory.

5. App State held their own against a nationally ranked program

Though a disappointing and close loss, head coach Shawn Clark commended his team’s performance against a top-25 ranked team.

“We’re very proud of our effort,” Clark said. “This is a gut-wrenching loss. This one loss won’t define us and we’ll learn from our mistakes.”

The Mountaineers showed flashes of greatness throughout the night. They held the Hurricanes to just two touchdowns on five red-zone appearances, and they kept the game even up until the final possession.

“In 24 hours, the sun’s going to come up, and we’ll make App Nation proud when we get back to The Rock next Saturday,” Clark said following the loss.

App State hopes to turn things around Saturday in its home-opener against Elon.