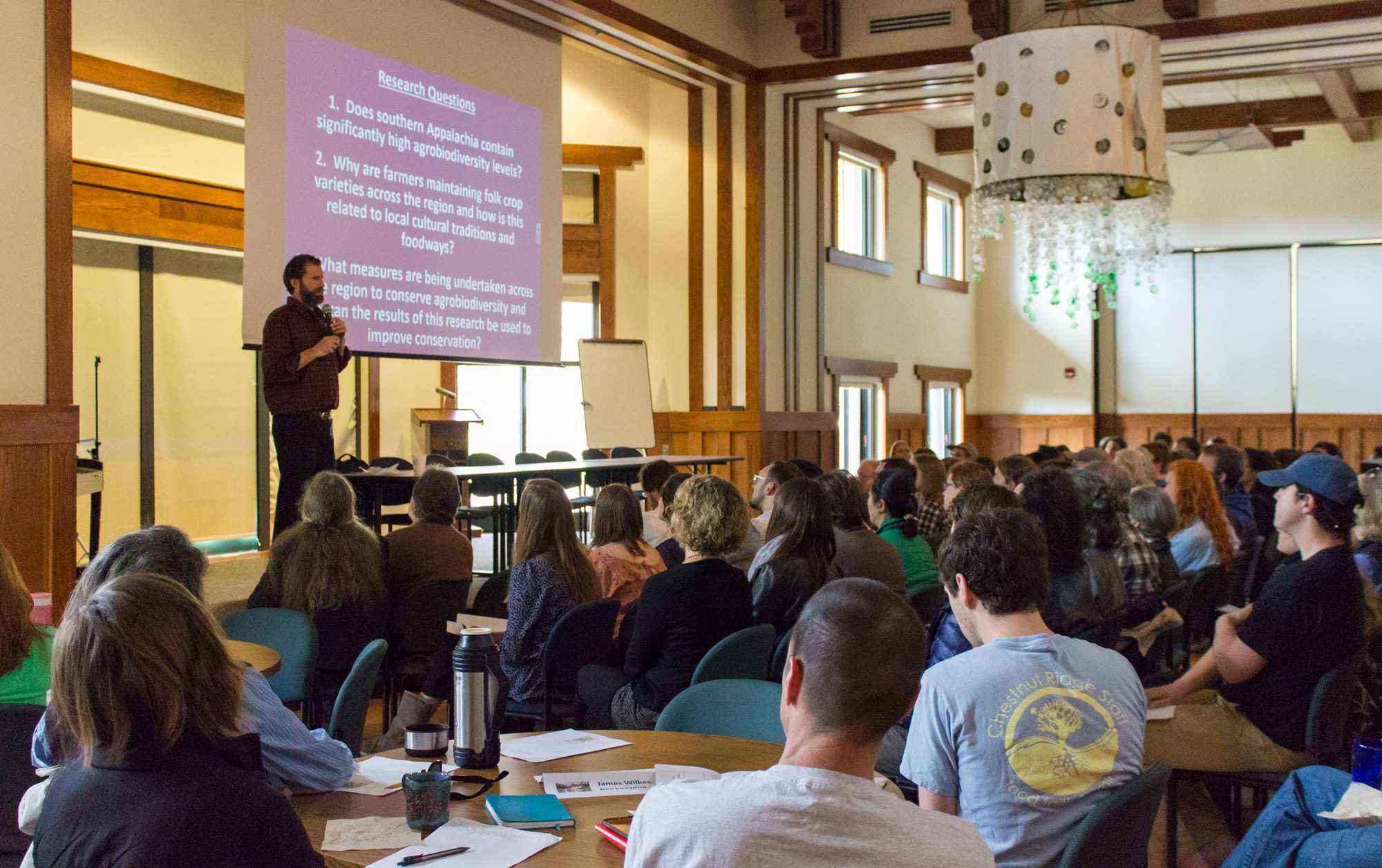 The doors to the Great Hall of the Living Learning Center stand open, allowing the brisk spring wind to flow into a room filled with faces from the local food system and sustainability initiatives.

This was the 2016 Food Summit, held on April 2 for the first time in six years, with this year’s theme, “seeding community resilience.”

Bringing together farmers, students, gardeners, homesteaders, chefs, faculty and other community members, The Food Summit served as a means to spark questions, conversations and relationships.

“That has been the spirit of the event,” Jacqui Ignatova, lecturer in the sustainable development department and primary event coordinator, said. “It’s not intended to be just an academic audience, we really want this to be accessible and interesting to farmers and community members, not only just students and faculty.”

When Ignatova came to Appalachian in the fall of 2015, she was highly interested in the local food movement and wanted to get involved, so through teaching, she has been able to have the “opportunity and gift” to hopefully enact positive social change, she said.

“One of the things that’s really awesome about being able to teach in the sustainable development department is that it’s not just an intellectual exercise talking about sustainable development, we have a real emphasis on practice,” she said. “I feel like The Food Summit is a way of sharing knowledge beyond the classroom and building connections across communities, that together we really can make these changes.”

The Food Summit was sponsored by the sustainable development department, in partnership with Blue Ridge Women in Agriculture.

Ignatova has done research on the debate over GMOs in Ghana, and studied the politics of seed saving and the importance of biocultural diversity throughout her master’s and Ph.D. programs, thus inspiring the theme of the summit.

“But one of the big themes, that I really like that came out, was ‘Someone told me that I couldn’t do it, and so, I did it,’” she said. “I just I love that emphasis on that kind of perseverance because I feel like oftentimes environmentalists are told, activists are told, that you can’t change things. That people are too set in their ways, it’s just kind of impossible. So I love the message that these farmers were saying, that, ‘I was told I couldn’t do it, and that made me more motivated to try and do it and here I am.’”

Following was an intergenerational knowledge exchange, a panel of five local farmers who spoke on topics ranging from climate change to personal stories in their experience with farming, to economic challenges, and how to farm and respect the earth simultaneously.

Susan Owen, owner of Lily Patch Farm in Vilas, North Carolina, said, “I knew anything I grew was going into the watershed,” furthering her farming habits to produce organic crops and protect the environment as well.

“Work and grow with mother nature, rather than against her,” Owen said. “She is our ally. Give her the benefit of the doubt. We have to change what we are doing to be in harmony with her.”

The common thought shared by the farmers was narrowed when Jon Fannon, local farmer and owner of Western Organic Wasabi & Sustainable Agriculture, said, “It’s a difficult path. Farming is not easy, but it is rewarding.”

“Sharing this kind of knowledge and helping to connect younger people with people who have this rich experience as a way of building resilience – I really liked that model, so I played with that and through all the awesome organizers, it was a collective enterprise in terms of selecting who was on the panel,” Ignatova said.

Ignatova chose these topics based on both her own passions and also based on what her students wanted, which was food access and food justice.

After the panel finished, a local lunch was served while some students stood with posters on topics they chose to research and study.

“I’m an avid biker,” Giglio said. “This is not a new thing, using a bike to power things. But I wanted to keep it very sustainable, everything recycled.”

She found the bike in a dumpster, bought the stand at Ram’s Rack Thrift Shop, used an old tractor belt, all recycled wood and drills for the table on the back tire frame, and bought the mill through a grant received through the Office of Student Research.

Giglio originally became interested in knowing where her food was coming from as her love for cooking and baking grew. Eventually this curiosity began a search to find the raw, main ingredients, and specifically about where the grain for her bread was coming from.

Rebecca Ewing, senior sustainable development major, was also curious to trace tea back to where it comes from.

“Most tea is handpicked,” Ewing said. “Tea plantation workers live on the plantation in which they work, but their living conditions are usually poor, and exploitation and low wages are very common.”

Ewing came to Appalachian wanting to study food, and then shifted her focus to social justice, and now, she said, she has a passion for both because she realized how highly intertwined they are.

“When tea is produced on such a large scale, not only does it cause labor issues, but also environmental issues,” Ewing said. “So that’s going to degrade your soil, it’s going to be harmful to the workers who have to spread the inputs, who then ingest it.”

Another poster was informing students about the Sustainable Development and Research Farm, which is an approximately 350 acre farm in Fleetwood, North Carolina that serves as a place for students to live, take what they’ve learned in the classroom, especially agroecology classes, and get hands-on learning.

The farm is diverse, including pigs, cattle, poultry, bees, a vegetable and herb garden, and a lot of forest, an aspect that is helpful for sustainable forestry classes, Lucina Hancock, senior sustainable development major, said.

“One year before [Hancock and I] were living there, one student had mushroom logs out there,” Daniel Micket, senior sustainable development major, said. “So, it’s really a place to cultivate your ideas, to try stuff out you’ve been wanting to try.”

“I think the questions from the audience and the conversations that we are having were great because it allowed exploration of the different roles we can perform in advancing more ecological sustainability and social justice,” Ignatova said.

“Something I try to convey to my students is that, no one’s perfect,” she said. “One of the things I think we need to keep in mind is that we’re always going to have these contradictions even if we’re really committed to [sustainability]. But there’s always something we can do, and it’s really important to carve out what your contribution is to advancing a more ecologically sustainable and socially just world.”