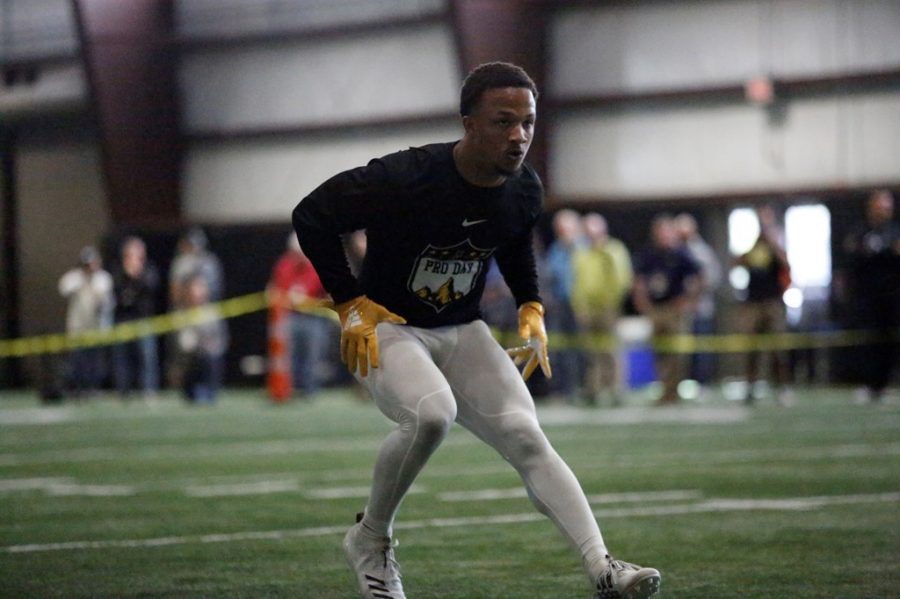 Eight NFL hopefuls showcased their skills at App State’s Pro Day on April 4 at the Sofield Indoor Practice Facility. Scouts and coaches from over 20 NFL teams came to watch the event, including the Houston Texans, Pittsburgh Steelers, Cleveland Browns and Carolina Panthers.

Senior running back Jalin Moore participated in his first organized football activity in App State gear since breaking and dislocating his right ankle against Arkansas State in October. He said being back around his teammates helped give him an edge during pro day.

“(Myquon Stout’s) voice, he has this unique voice,” Moore said. “I can hear him out of a crowd. It brought back old memories of all the fall camps we’ve been through. I’ve been away for five months, and I hadn’t heard that in a long time. That gave me an extra kick, like, I’m home. Let’s do this. I’m with my boys right now.”

Moore ran a 20-yard shuttle in 4.39 seconds and posted a 33-inch vertical leap before participating in running back and wide receiver drills. At the NFL combine in March, he managed 27 reps in the 225-pound bench press, the second-highest of all running backs at the combine.

His efforts at pro day and the combine earned him interviews with several NFL teams.

“I felt real good,” Moore said. “Felt better as it went on and started getting confidence in my ankle more and more.”

Junior cornerback Clifton Duck also participated in pro day activities after announcing in January that he would forego his senior season to enter the NFL draft. He put up 16 reps in the 225-pound bench press before participating in defensive back drills, but said he felt like his weigh-in was the most important.

The average NFL cornerback weighs between 185 and 200 pounds, so Duck said proving he’s at a pro-level weight was an important factor for him. Duck was listed as weighing 170 pounds his junior year at App State. He also met with NFL representatives after his activities.

“I feel like I’m versatile and I can play whatever,” Flory said. “I just wanted to show them that I can do whatever they need me to do.”

Local pro days hosted by NFL teams and individual visits still stand in the way of signing with a professional team for these prospects. The NFL draft is from April 25-27 in Nashville, Tennessee.