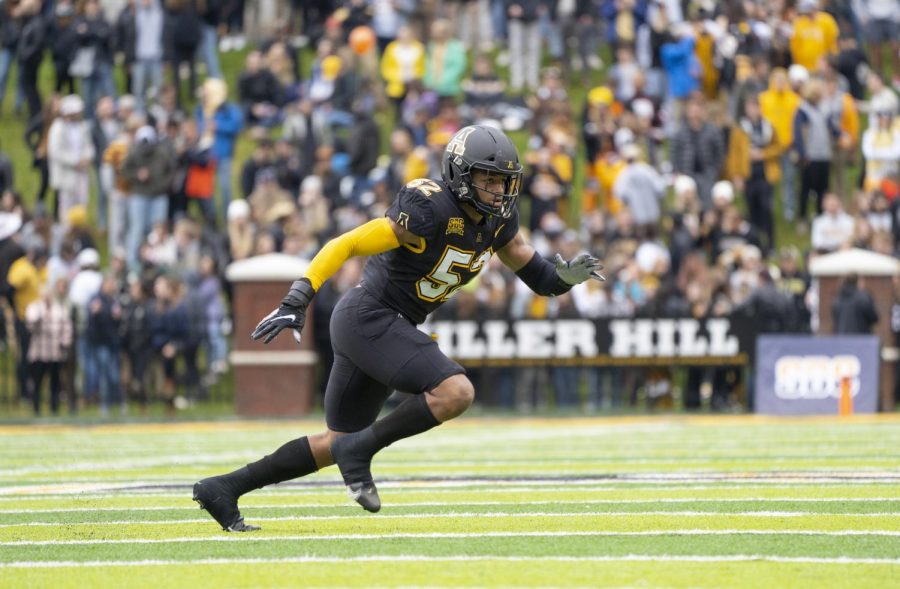 Former linebacker D'Marco Jackson sprints to the ball against ULM Oct. 30, 2021. Jackson is the 16th Mountaineer to be drafted to the NFL since 2000.

Former App State linebacker D’Marco Jackson was selected Saturday by the New Orleans Saints in the fifth round of the NFL Draft with the 161st pick. This marks the third-straight year a Mountaineer football player has been drafted.

“You keep waiting and waiting, my stomach was in knots, and then when I seen the call, it was just my, like, my stomach dropped and just a bunch of relief,” Jackson said.

The 2021 Sun Belt Conference Defensive Player of the Year will join a defense that allowed the lowest rushing yards per carry and the fourth-lowest amount of points in the NFL last season. Jackson will have the opportunity to learn from 2017 first team All-Pro defensive end Cameron Jordan and 2019 first team All-Pro linebacker Demario Davis.

Davis and Pete Werner are expected to start at linebacker for the Saints this season, so it is likely that Jackson will start out as a backup and may receive time on special teams. That’s is how Jackson’s career started with the Mountaineers as well. With App State, he made the most of those opportunities when he recorded a punt return touchdown in 2019 against Charlotte and tied for the team lead in tackles the 2020 season.

“If you go through my history, special teams is how I made my way to the field,” Jackson told The Appalachian in November.

Jackson will play under Saints head coach Dennis Allen. Allen’s defensive mind benefits Jackson. He was the Saint’s defensive coordinator 2015-22 and was promoted to head coach this off-season. In the last two seasons, his defenses have finished top 10 in yards per game and top five in opponent points per game. In his 20 seasons employed in the NFL, Allen has had 10 of his players selected for 21 pro bowl selections.

“Excited for you, enjoy this moment and congratulations,” said Allen when he drafted Jackson.

Jackson had a monumental career as a Mountaineer. He earned back-to-back first team All-Sun Belt selections in 2020-21. In addition, Jackson was the only Division I FBS player in the millennium to tally 120 tackles, 19 tackles for loss, six sacks and six passes defended in a single season.

He also made his mark as a leader. Jackson was a team captain in the 2021 season and was a finalist for male athlete of the year at the APPSPY’s which are awards given to App State athletes.

“D’Marco Jackson should have gone a long time ago. Former safety, he can really run and cover,” said Daniel Jeremiah, App State alumnus and NFL Draft analyst, on Twitter.