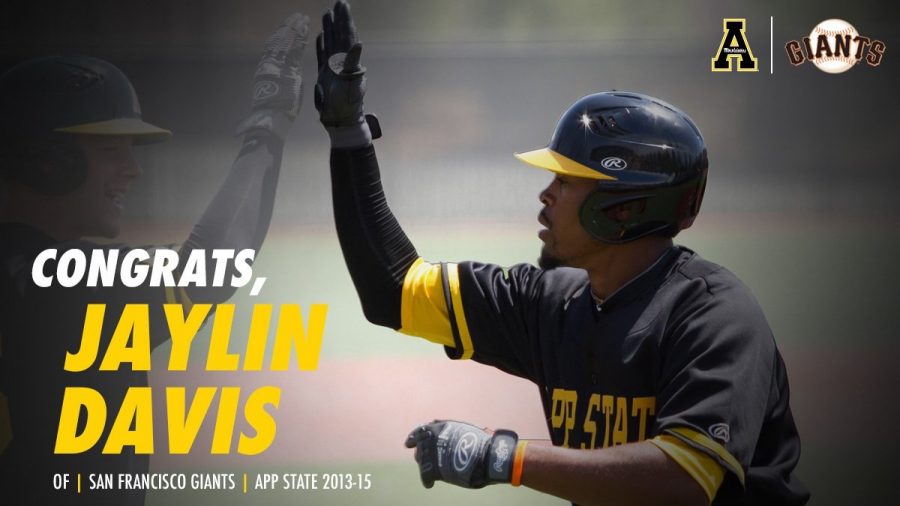 Jaylin Davis played baseball at App State from 2013-15. He was called up to the San Francisco Giants on Sept. 4. // Photo and graphic courtesy of App State Athletics

Davis played baseball for App State from 2013-15. He hit 35 home runs and hit for a .306 average in 126 games in the minor leagues before the call-up. His home run mark was tied for fourth best in the minors.

In his freshman year with the Mountaineers, Davis was an All-American and the Southern Conference Freshman of the Year after hitting .257 with 36 runs batted in, four home runs, four triples and 12 doubles in 54 games.

Davis was injured for most of his junior year and left App State for the MLB draft after the conclusion of the 2015 season. He finished his Mountaineer career with a .268 average, 10 homers and 83 RBIs in 126 games.

The Greensboro native was drafted by the Minnesota Twins in the 24th round of the 2015 MLB Draft. He was traded to the Giants on July 31.

Davis made his debut Wednesday night in St. Louis against the Cardinals as fellow North Carolinian Madison Bumgarner took the hill. Davis started in right field and hit 7th in the batting order. He legged out a ball hit to third base in the top of the second for the first MLB hit of his career. It came on a 3-2 pitch with one out against Cardinals pitcher Michael Wacha.