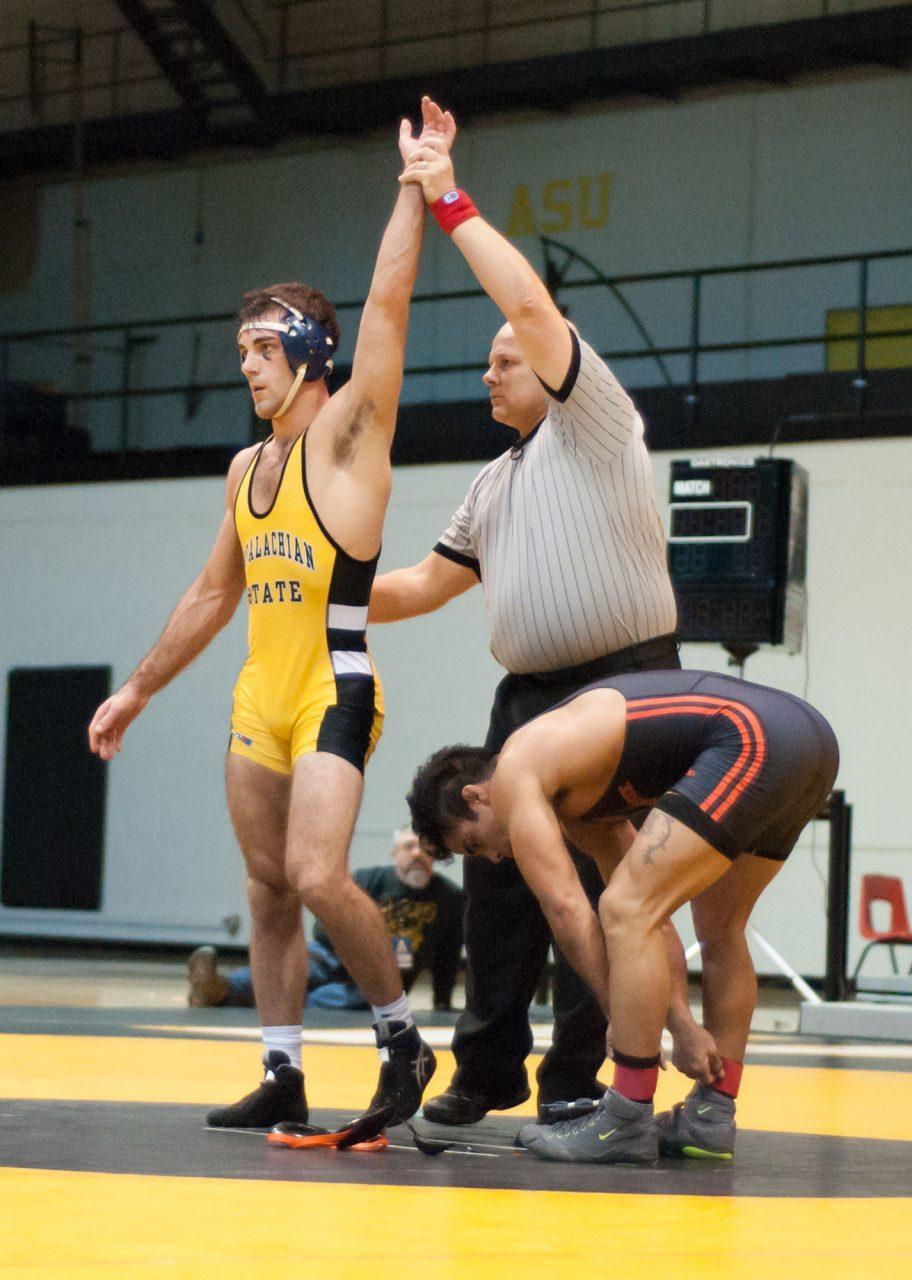 Senior Forrest Przybysz wins his macth in the 2017 season at home in Boone.

Forrest Przybysz is one of the few senior wrestlers on Head coach Johnmark Bentley’s team. Przybysz has been on the team for five years now after redshirting midway through his freshman year, amassing over 56 career wins with more on the way.

While this may be Przybysz’s final season at App State, thoughts of the end are far from his mind. Instead he is focused on the match with Duke and a Southern Conference title. He is focused on what is directly in front of him, not what is yet to come.

“No matter who we wrestle, we wrestle our style,” coach Bentley said. “We have our own identity, and we use that identity every single day.”

With hard work and a strong team behind him, Przybysz has gone from a 4-3 freshman to a SoCon runner up at both 165 and 175 pounds.

“I would wipe the floor with me from freshman year right now,” Przybysz said.

He is probably not wrong, seeing how Przybysz only wrestled in seven matches his freshman year for the Mountaineers before redshirting. With that time to develop, he returned the following season a whole new athlete.

Przybysz finished the 2014-2015 season with a 12-12 overall record, losing only one of seven duals matches for the Mountaineers. He also claimed second place in the SoCon Championships while also making the conference all-freshman team.

“We go out there, and we wrestle hard for seven minutes,” junior Irvin Enriquez said. “What happens in the past stays there. We focus on the future.”

That certainly seems to be the case, seeing how Przybysz has statistically improved every single season. He finished his sophomore year 18-10 overall with an NCAA qualification and a 2-1 record at the National Freestyle Duals tournament.

The following season he posted a 22-12 overall record while placing second in the SoCon for a third time. Przybysz recorded victories against opponents from Oregon State, Duke and North Carolina State to add to an already impressive junior year.

With the past in the rearview mirror, a whole new set of goals awaits the senior leader, goals that include one last shot at the SoCon title. This past weekend, App State defeated Chattanooga by a score of 18-16. Przybysz defeated Justin Lampe by a 4-2 decision, and the Mountaineers claimed at least a share of the SoCon title for the third straight season.

App State is set to wrestle Duke at home for their senior night this year, which will be Przybysz’s final home match as a Mountaineer. While it is hard to imagine a wrestling match without him, Przybysz said he looks back at his time here in Boone and cannot help but smile.

“There is nothing like the atmosphere in Varsity Gymnasium,” Przybysz said. “The fans, the entrance run from the wrestling room to the competition mat, you cannot beat wrestling in Boone, North Carolina.”

He came to App State and fully committed himself to the identity coach Bentley teaches his team. With so much on the line and so many goals yet to be accomplished, it is hard to think of a more fitting end to Przybysz’s career.