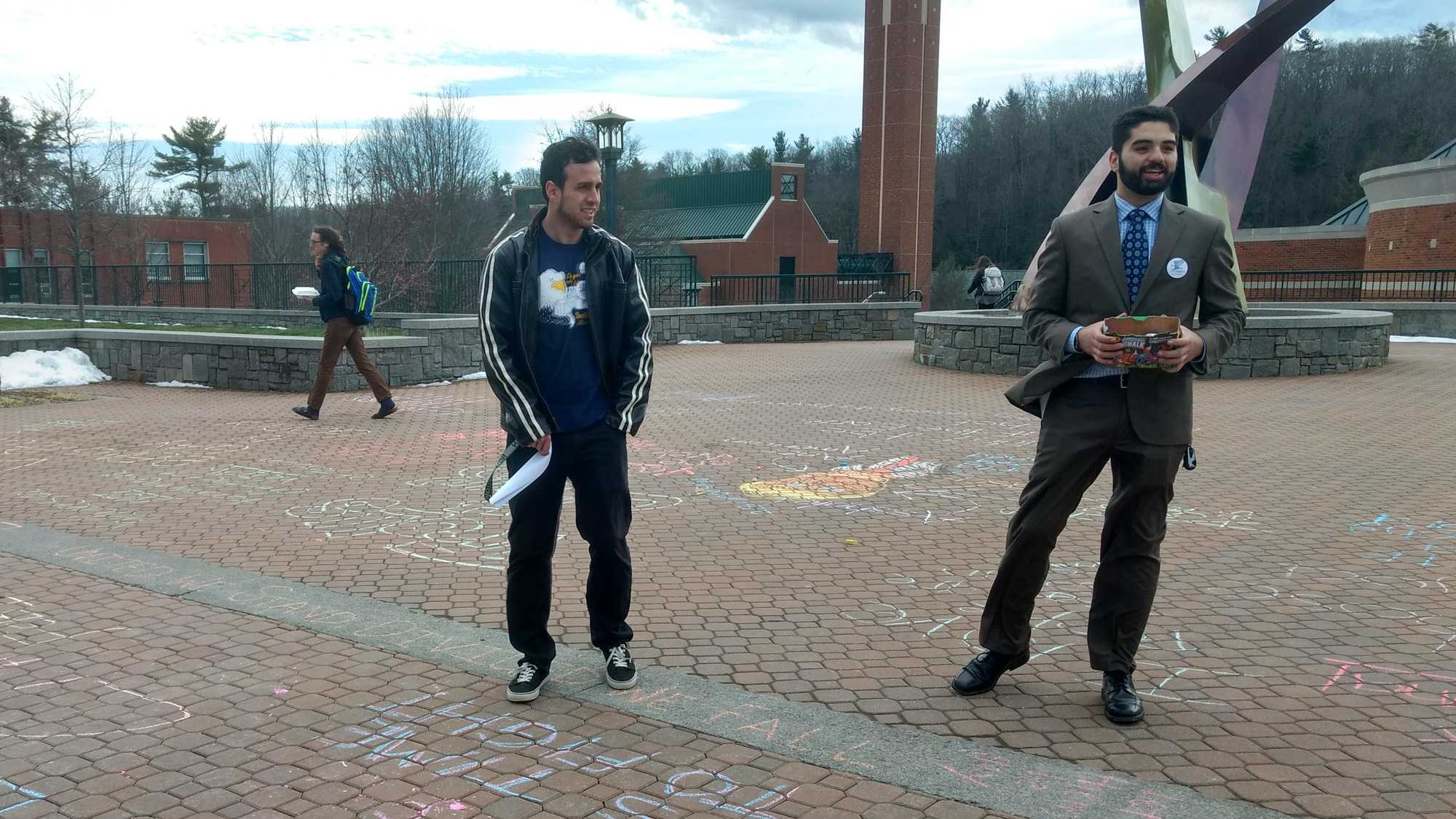 Grant Jeffrey and Brandon Hendricks handing out chalk at the Young Americans for Liberty Chalking for Free Speech event. YAL members handed out chalk and encouraged students to write whatever they wanted to protest the university's chalking policy.

Young Americans for Liberty invited passersby to chalk on Sanford Mall as a means of protest against changes made to the university’s policy last semester.

The new policy, enacted last September after pro-Trump and anti-immigrant messages were written on campus, stipulates that only registered student organizations can write in chalk to promote specific events.

Nick Williams, co-president of Appalachian State Young Americans for Liberty, said he feels it’s unfair for students to lose their right to freely express themselves due to the actions of a few.

YAL members offered chalk to students and faculty walking across Sanford, encouraging them to write whatever they pleased.

“We’re just coming out here, nonpartisan, we’re allowing people to express themselves, write anything they want as long as it’s not hateful or threatening,” Williams said.

Grant Jeffrey, co-president of Appalachian State YAL, said the larger aim of the event was to change university policy regarding where people can protest without a permit as well as alter the chalking policy to be more similar to Ohio University’s.

“Our biggest thing was repeal anything that’s in direct conflict with the First Amendment, we think that the constitution of the United States trumps the Appalachian policy,” Jeffrey said.

JJ Brown, dean of students, said he was happy to see students exercising their First Amendment rights and was interested to see any ideas they had about the chalking policy.

The event was also inadvertently attended by some of Sanford’s itinerant preachers. Jim Thornton said that while some of the chalkings were positive he couldn’t help but wonder about the legal status of some of the cruder ones.

YAL held a similar protest last october and Williams said that the recent graffiti put the chalking policy back on the radar for them.

“I don’t think it’s directly related to this chalking policy but I also think it stands as sort of a symbol of the lack of dialogue on campus and whenever you limit student’s ability to freely express themselves you’re gonna have deviance,” Williams said.

Williams said that having the right to political speech is especially crucial right now, given the controversies sparked by the Trump administration.

While Williams said the event was not against Trump, the president was a popular target.

Andrew Mullins, a freshman psychology major, said he was drawn to the chalked over mall as a litmus test for the campus’s mood and got a few laughs out of some of the anti-Trump messages.

Capt. Johnny Brown, with University Police, said the department had an officer on site for a while to ensure everything remained calm.

“That’s the biggest thing for me is as long as everything is calm and people are being respectful I feel like that’s the best start and after speaking with that officer it feels like that was the case,” Brown said

Anderson Clayton, SGA director of external affairs, said she supported the protest because she feels the current policy criminalizes chalking while failing to address the real problem, the hateful messages.

“College campuses, like I said, should be the last place where restrictive free speech policies should be because this is the place and this is the time in our lives where we should be exploring new ideas,” Williams said.