Free tattoos for the community 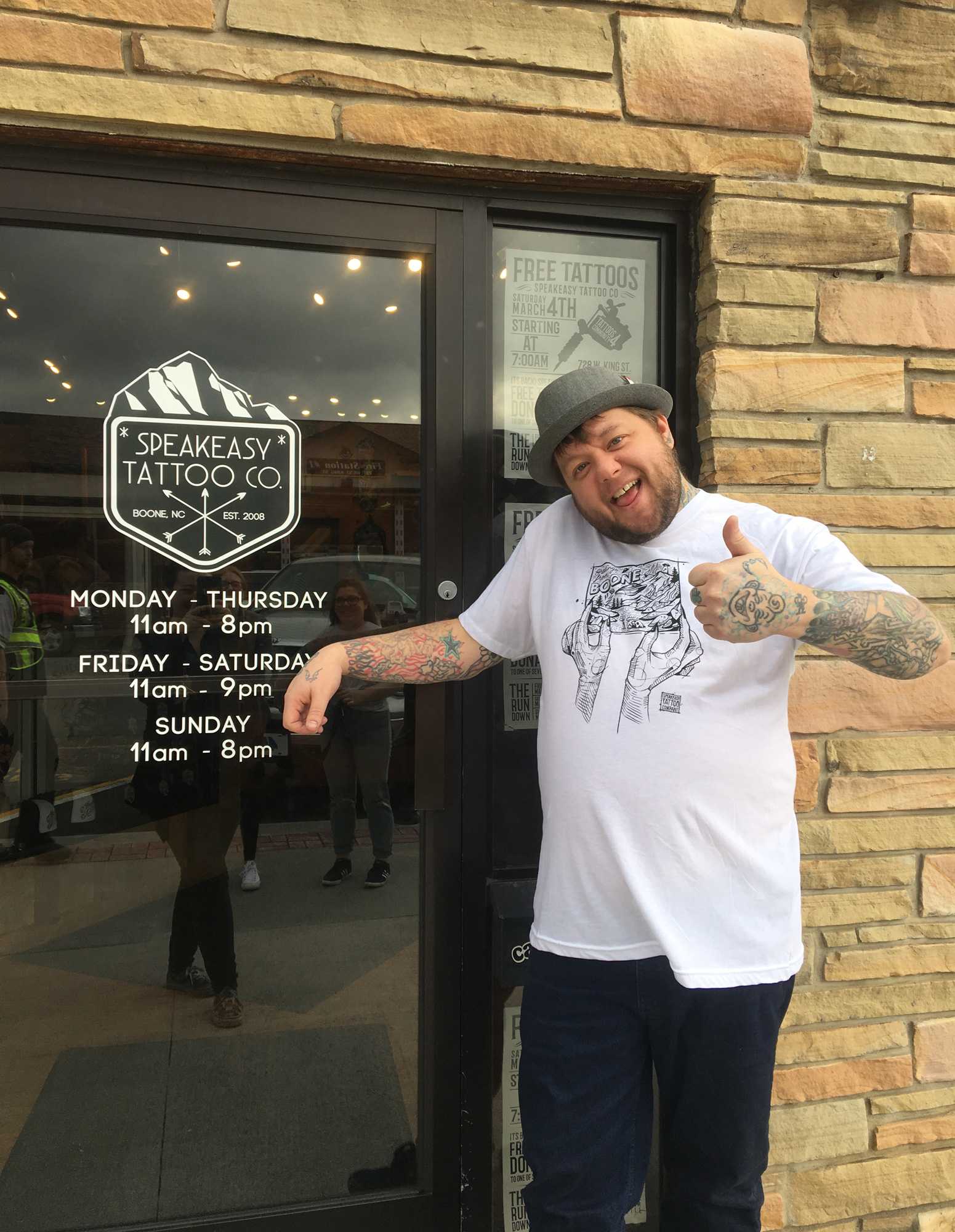 Various businesses in downtown Boone are coming together to raise money for the community March 3-5. Speakeasy Tattoo is spearheading the weekend with their “Free Tattoos for the Community” event on March 4 which offers free tattoos with a minimum of a $20 donation to one of the chosen seven local businesses and nonprofits.

According to a press release for the event, from 2009 through 2013, Speakeasy hosted a similar charity day called “Tattoos for Schools,” held on St. Patrick’s Day each year that raised over $5,000 to buy art supplies for Watauga County elementary schools.

Greg Kinnamon, owner of Speakeasy and the creator of “Free Tattoos for the Community,” said the event is similar to “Tattoos for Schools,” but they are adding more tattoos and are raising money for more local businesses and nonprofits. These include Wine To Water, Medi-Home Hospice, Watauga Humane Society, Do It Yourself Skatepark, North Carolina Planned Parenthood, F.A.R.M. Cafe and Blue Ridge Conservancy.

Each charity has their own tattoo flash sheet with designs that correlate with that charity. Kinnamon said each Speakeasy tattoo artist chose a charity they believed in. The charities were not randomly selected.

“Instead of just choosing one charity and driving all our efforts for that one charity, we thought that [we would give] each artist here who has their own little mini-business in here, their own following, clients, styles [and] beliefs an opportunity for that day to do something they really believed in,” Kinnamon said. “I think that those charities are a good fit for us.”

Kinnamon chose Medi Home Health & Hospitality as one of his charities because he said it was really important to people in the High Country.

The people who need it are in the most stressful and scary time in their lives, he said. “Any help that goes to that is really needed because we will all need that at some point in our lives.”

He also chose Wine To Water, a charity that installs wells and filters in countries like Nepal, Dominican Republic and Sudan. Being friends with them for many years, Kinnamon said he really believes in what they do.

“We are really fortunate in the High Country to be able to turn on the tap and drink super good water,” Kinnamon said. “Wine To Water is doing incredible things by helping other people in the world drink the same kind of water we do. That is why I chose them.”

Kinnamon said there will be about a dozen tattoo artists at Speakeasy on March 4 for “Free Tattoos for the Community.” He said the event is going to be a huge party, especially because he has friends coming from in and out of state solely for the event.

“We have done over 200 tattoos in the past on a charity day so we imagine we should do around 500 tattoos that day,” Kinnamon said.

Kinnamon recommends that people have a good game plan beforehand.

“Generally people will sleep out there,” Kinnamon said. “I wouldn’t be surprised if after the party people come out and sleep out there. At 7 a.m. there should be 50 or more people in line.”

The weekend kicks off March 3 at the First Friday Art Crawl. There will be an art show at Speakeasy showcasing all of the available tattoo designs as well as an artist meet and greet from 5:30 to 8:30 p.m. There will be free beer sponsored by Pabst Blue Ribbon and snacks from Vidalia restaurant.

The free tattooing begins 7 a.m. on March 4 and ends at 10 p.m. that night. Kinnamon said the tattoo artists will do their best to get to everyone in line and said if the tattooers have enough energy they will keep working even past that deadline.

Kinnamon said this event is for everyone in the High Country and Boone area, not just for students.

“Although I’d imagine the majority of people coming out will be students, which is rad, it is for anybody,” Kinnamon said.

Kinnamon said there are no changes to the size or content of the tattoos and people cannot bring their own designs. There is a limit of up to five tattoos on two different parts of the body.

“You can’t come in and be like, ‘I want one on my foot and my other foot and my neck, hand and ribs,’” Kinnamon said. “It will just take all day and it starts becoming about you and not about us making some money for these charities.”

Speakeasy does not tattoo the insides of feet, fingers or hands. Kinnamon said there will be no face or neck tattoos, but anywhere else is fair game.

“What we already don’t tattoo, we are not just gonna then tattoo,” he said. “We’re gonna put them anywhere but on the neck and face. [It’s] too time consuming to do that stuff.”

Kinnamon said the staff does not mind doing the tattoos, but they do not want to spend all day with one person changing their mind about where they want the tattoos.

As of now, the flash sheets that are available on Speakeasy’s social media accounts are Wine To Water, Watauga Humane Society, North Carolina Planned Parenthood and Blue Ridge Conservancy. Kinnamon said they will “slowly roll out” the designs to build hype and mystery. He encourages people to pay attention to Speakeasy’s Instagram and Facebook accounts for pictures of the flash sheets for the other charities.

On March 5, the event will wind down and cap off with a party at Boone Saloon hosted by Booneshine Brewing Company. Booneshine will be doing a tap takeover, where they will bring their own beers and switch them with the ones at Boone Saloon.

Wine To Water wine will also have more of their selections available at Saloon. There will be a $5 cover that will also go to charity and there will be prizes and giveaways. The grand prize is a $500 Speakeasy gift certificate, which Kinnamon said is worth about four hours of tattooing.

Skip Sinanias, owner of Boone Saloon, while mimicking President Donald Trump’s voice, said the after-party is “going to be huge.” The party starts at 4 p.m. at Saloon with music from Trevor McKenzie and Royal Nature. It will close with a dance party by DJ Overcash starting at 9 p.m.

McKenzie plays old-time music and was a child prodigy, and that DJ Overcash was the DJ for Saloon’s Inaugural party and can throw a “phenomenal dance party,” Sinanias said.

Sinanias said he loves the free tattoo event and believes it is a great idea, especially since it is a whole weekend affair.

“We are talking about maybe next year we’d have a little parade,” Sinanias said. “We would call it March Fourth for Philanthropy or a cause; it would be kind of like a May Day situation. In Atlanta we’d have the East Atlanta Strut, where you just kind of strut your shit, whatever you want with no real theme.”

Sinanias said the first 100 people at the door will receive a free beer, hopefully Booneshine beer or Pabst Blue Ribbon. “We will have at least three or four Booneshine beers, so we will encourage people to drink their beer,” Sinanias said.

The weekend-long events have a unifying effect because it includes businesses up and down King street, he said.

“From Boone Saloon to Vidalia, it unifies all of King Street and brings us together for not just one purpose, but for six different purposes,” Sinanias said. “I think that is what King Street needs for a lot of the cool little spots up and down the street. It is a nice kick-ass unifying effect. I think that is the best part about it for sure.”

Kinnamon said he felt that with all the people who come in and spend money each year at Speakeasy, they can afford to take one day out of the year and give back.

“The whole thing is, when you live in Boone and you are actually a member of the community, you realize that giving back is really important here,” Kinnamon said. “Everybody here is into doing something for their community, it is just mountain life, that is just the way we do it here.”

When Kinnamon opened Speakeasy in 2008, he said from day one the community has totally supported his business, the shop and the artists.

“They have not only kept us housed, clothed and fed with their businesses, they have allowed us to grow,” Kinnamon said. “We have grown a lot in the last almost nine years we have been here and that is because of the community support. We just feel like it is only right to kind of flip that back and do something for the community.”

The Watauga Humane Society is among the seven charities to benefit from the tattoo donations. The flash sheet, displaying designs of mainly cats and dogs, are drawings by tattoo artist Cutty Bage. Some of the tattoo designs include a cat sitting in a crescent moon, a sketched Welsh corgi and dachshund, some varieties of paw prints and a cat astronaut.

Karen Keys is a member of the board of directors for the Watauga County Humane Society who is thrilled about the event.

“We are so pleased to be chosen to be a participant. It really means a lot,” Keys said.

Keys said the Humane Society is planning on coming out to Speakeasy for Art Crawl to showcase the adoptable dogs they have available. Keys said they will also be out on Saturday with the dogs to mingle with people standing in line, however Keys is not sure what times they will be out.

Keys said even though she is not planning on getting a tattoo, a fellow board member might shame her into it. “I have gone this long without having a tattoo, but never say never. I might get caught up and get one,” Keys said. She encouraged everyone to come out and “get inked for animals.”