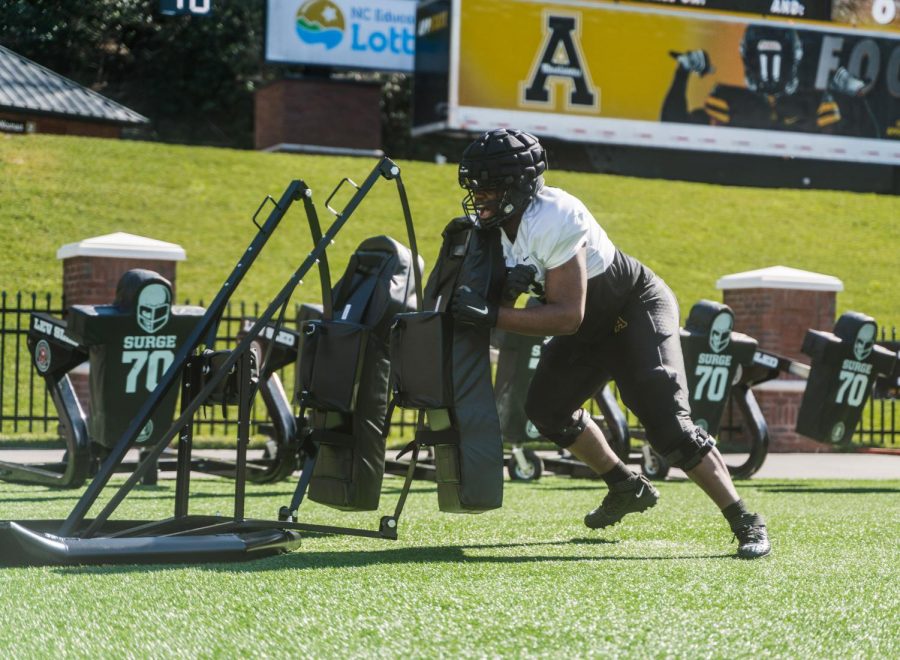 After committing to the Mountaineers back in May of 2020, freshman offensive lineman Jaden Lindsay enrolled at App State for the spring semester and has been heavily involved in spring practice, earning the opportunity to play with the starters during practice.

There was no fall high school football in North Carolina and Lindsay has been preparing to come to Boone since last summer, electing to graduate from high school early and forgo his senior season this spring.

“He should be in high school right now getting ready for the prom, probably couldn’t get a date so he decided to enroll early. But, this guy didn’t play football last fall and the speed of things has really shocked him in some ways,” App State football head coach Shawn Clark said. “He has a long way to go, but he’s come a long way in nine practices.”

Lindsay has been working toward playing right guard this season, taking over for super senior Baer Hunter, who moved to center. The East Forsyth product has a connection with Hunter, who played at West Forsyth,.

“He’s a heck of a player, you know, he’s from our rival high school at East Forsyth and you already know how I feel about those guys over there and I talk mess to (Jaden) about that a little bit,” Hunter said. “The ceiling is the roof for him and once he understands and starts listening, he can come out there and play as fast as he wants to.”

App State offensive line coach Nic Cardwell recruited Lindsay. After watching all of his high school tape, Cardwell and the staff knew it was a no-brainer to bring Lindsay into the program.

“He’s big, he’s strong but he’s learning right now he’s not the biggest one anymore and it takes a little bit more technique and fundamentals,” Cardwell said. “He’s got a nasty streak, he’s very fluid, he’s got some twitch to him … when we saw that on film, how hard he played and the kind of twitch that he had, we definitely wanted him to be a part of our program.”

After getting comfortable in the system and program at App State, Lindsay is excited to play at The Rock in front of all of the Mountaineer faithful. Having not visited in person, Lindsay only has an idea of what the game day atmosphere at The Rock is like from watching videos. Beyond just the stadium, the Boone community hasn’t been able to connect with Lindsay because of health and safety regulations.

Filling Hunter’s shoes at his position as well as graduates Ryan Neuzil and Noah Hannon is a tough task for any freshman. Even though the competition is still open, Lindsay wants to have a stronghold on a starting spot.