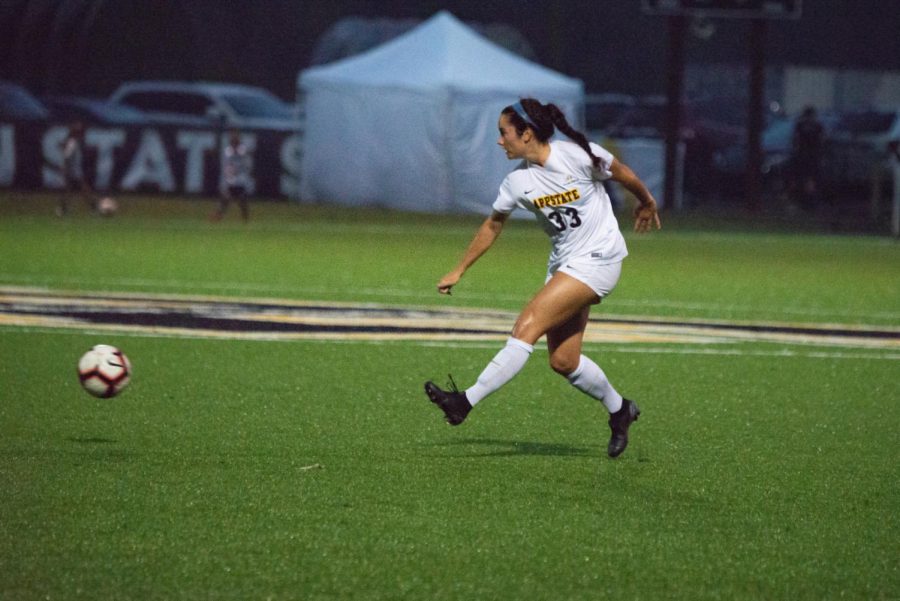 The App State women’s soccer team ended its two-game losing streak against Florida International University in a 2-1 comeback victory on Sept. 13 at home.

The Mountaineers faced adversity early in the game when a gap in the Mountaineers’ defense led to a goal 4 minutes into the game from FIU sophomore forward Rayquel Berry.

App State freshman forward Hulda Agustsdottir created a goal-scoring opportunity for the Mountaineers in the 30th minute. With a powerful, long shot that hit the post, Agustsdottir was inches away from leveling the score.

The Mountaineers told a different story in the second half. With a counter-attacking offense that played the ball out wide, the Mountaineers’ offense displayed creativity.

The Mountaineers capitalized on FIU’s lack of defensive pressure to score the game-winning goal in the 80th minute.

Senior midfielder and captain Ava Dawson found an opening in FIU’s defense. Dawson marked her first assist of the season with a pass to Boyles, who lifted the Mountaineers to a 2-1 victory by scoring her first game winning-goal and second career goal.

“It makes me feel really great,” Boyles said. “I am just so happy that I was able to accomplish this for my team. We’ve been struggling this season, and we just needed this push, and I feel like this win has really given us a lot of momentum going into conference play.”

Boyles also mentioned how she is proud of her supportive teammates.
“I am just super proud of the way our team played tonight, and it’s really special for me coming in as a freshman to be able to give back to my team that has given so much to me this season,” Boyles said. “I am just super happy for our team tonight.”

“She got the assist on the other goal, so she had a really great night, but I think Hayley is someone that is relentless,” Strickland said. “She doesn’t give up. She works real hard. She’s got a great change of pace and she defends hard, too.”

Strickland acknowledged the importance of starting and finishing each game strong.

“We always talk about the first five (minutes) and the last five minutes being a big five moment,” Strickland said. “It’s really influential in the game and obviously that’s twice now that we have conceded a goal within the first five minutes, and we’ve talked about that, how we have to be switched on and mentally ready from the time the first whistle blows.”

Moving forward, Strickland expects to see her girls giving a “relentless effort” and not submitting to their opponent’s style of play.

“Rather than making an adjustment for a team, we are going to get it right, and then if that doesn’t work, we are going to talk about it,” Strickland said. “Going forward, we got to be able to sit in our system, knock the ball around, shorten the distance, stop the forward pass defensively, get all the things right that we are supposed to do and if we do that, we will take care of business.”

The result marks the Mountaineers’ second win of the season, moving their overall record to (2-4-1). App State’s next game is a home game at the Ted Mackorell Soccer Complex Sept. 20. at 7 p.m. against Troy University in their first Sun Belt conference game.